Turkey to keep curfews as it enters ‘gradual normalization’ period 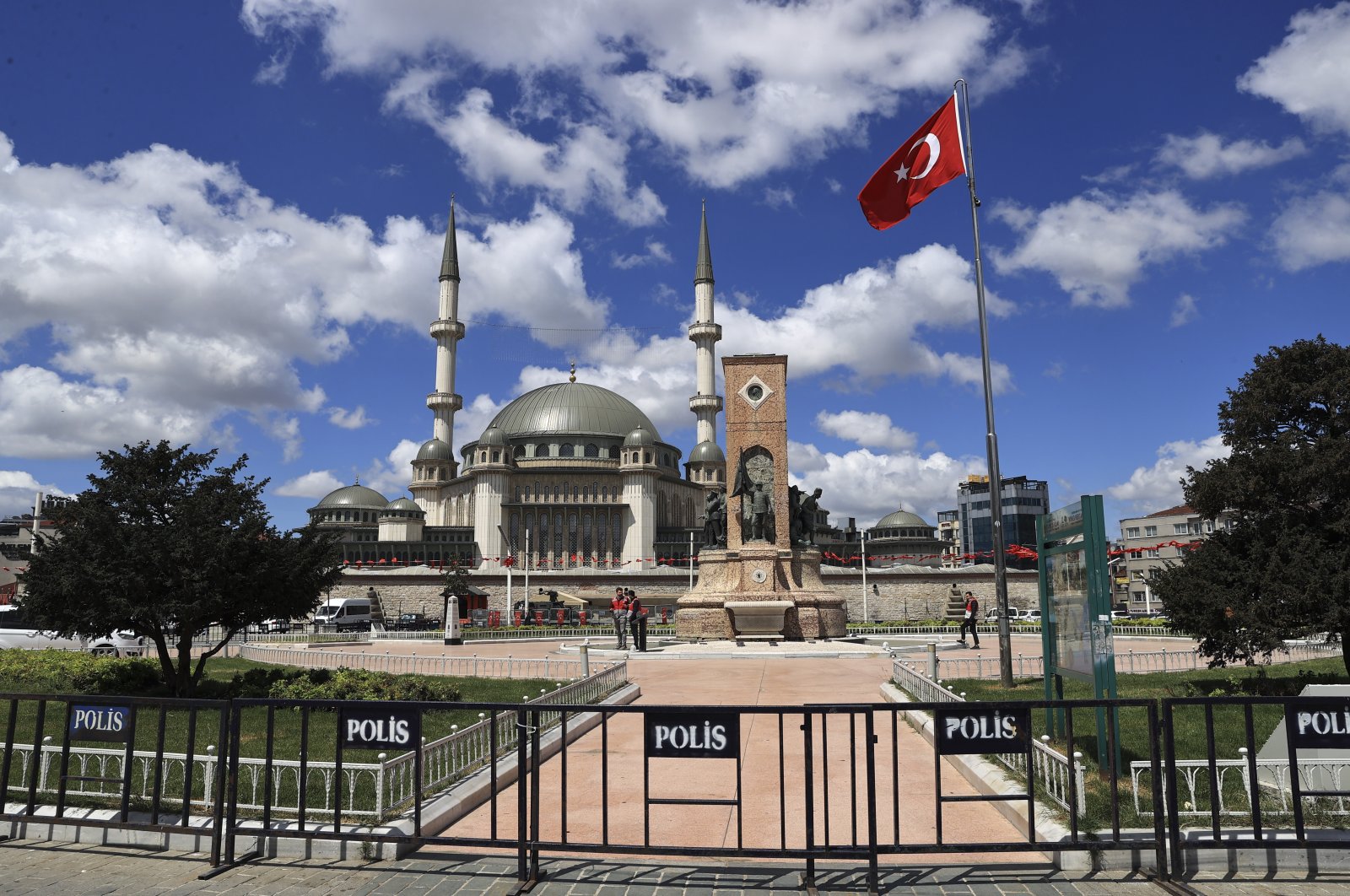 Even though the number of new coronavirus infections has sharply decreased, Turkey is going to keep weeknight curfews and will also impose full lockdowns on weekends to keep the cases down

Ankara will impose a weeknight curfew and implement a full lockdown on weekends that will start on Monday and last until the beginning of June as Turkey prepares to enter what it calls a "gradual normalization period," the Interior Ministry said Sunday.

In a circular, the ministry said the government would keep imposing a curfew from 9 p.m. to 5 a.m. on weekdays and a full lockdown would be in effect during weekends, which will begin at 9 p.m. on Fridays and end at 5 a.m. on Mondays.

Seniors aged 65 and above won't face any additional curfew hours if they have had both of their COVID-19 vaccine doses, but those who have not will only be allowed to out between 10 a.m. and 2 p.m.

Calling it a "gradual normalization period," the ministry said the new measures will be implemented starting Monday and will remain in place until June 1.

Introduced during the total lockdown period, the ban on intercity travel will be eased, as well. People will be allowed to travel between cities by car only when the curfew is not in effect, but travel by bus or airplane will be allowed at all times.

A 50% capacity reduction in all mass transit vehicles will remain in place, and seniors aged 65 and above, as well as youth younger than 18, will not be allowed to use any public transportation.

Shopping malls, meanwhile, will operate from 10 a.m. to 8 p.m. during weekdays and will remain closed on weekends.

Like with the previous lockdowns, grocery stores, butcheries, bakeries, greengrocers, dessert shops and specialty shops selling dried fruits and nuts (kuruyemişçi) will remain open from 10 a.m. to 5 p.m. People, however, will only be allowed to shop from their nearest store on foot as travel with private vehicles will be banned during lockdown hours.

Public and private hospitals will continue to operate normally. Anyone with a doctor's appointment, including one for a COVID-19 vaccine, or a medical emergency will be exempted from curfew hours.

In addition to hospitals, pharmacies will continue to operate in their regular schedule. People will be allowed to visit their nearest pharmacy on foot without violating the lockdown.

Tourists visiting the country will be exempt from curfews. Foreigners living in Turkey who have short or long-term residence permits or work visas, however, are not considered tourists and will have to comply with curfew hours.

In a separate statement, the Education Ministry said all students except preschoolers will continue their education via remote learning until June 1.

The announcement by the ministry came as a 17-day total lockdown that came into effect last month was set to expire.

After setting consecutive records with the number of daily cases reaching as high as 60,000, Ankara on April 29 imposed the strictest lockdown that brought life to a standstill across the country. The measures, however, proved effective as the number of daily infections rapidly declined.

According to the Health Ministry figures on Saturday, Turkey recorded 11,472 new cases and 236 daily deaths, while 38,814 patients were declared recovered. With recoveries far exceeding new infections, the country currently has 129,487 active cases.

Last summer, Turkey also relaxed restrictions but it led to a spike in cases during the winter. But this time, the government plans to lift the curfews without another increase in cases thanks to the vaccines.

Meanwhile, the number of vaccinations administered against the coronavirus has reached more than 1.1 billion globally, as Turkey dropped to the ninth spot among the top 10 countries which administered the most doses. Still, with 25.5 million doses administered, it remains ahead of many countries like Spain, Canada, Indonesia and Russia – which is set to supply the country with its Sputnik V vaccine. The country also reported a significant decline in coronavirus cases in the past week for all 81 provinces, including Istanbul, which has the highest number of cases.

Statistics show the average number of vaccine shots per 100 people was 27.62 in Turkey. More than 14 million people have received their first jabs, while another 9.8 million people were administered second shots since an inoculation campaign began in January.

The vaccination drive started with CoronaVac before Turkey acquired the Pfizer/BioNTech vaccine recently. Earlier this week, Health Minister Fahrettin Koca announced that the country would acquire 50 million doses of Sputnik V vaccine within the next six months and 90 million more doses from Pfizer-BioNTech. Overall, the country ordered 240 million doses of COVID-19 vaccines, including 100 million from China’s Sinovac, though the shipment has hit some technical delays according to authorities.

Quoted by Yeni Şafak newspaper on Wednesday, Fahrettin Koca said they would likely administer a “locally-made vaccine as a 'third dose.'” Koca said a single third dose was recommended at least six months after a person is injected with the second dose and the current timeframe in the development of locally-made vaccines may be enough to catch up with that period. “I believe a domestic vaccine will eliminate our need for (dependence on abroad) for third doses,” Koca said. The minister noted that more than one locally-made vaccine would be available towards the end of 2021. He said an inactive vaccine developed at Erciyes University in central Turkey had wrapped up Phase 2 trials and may be available after later trials and analysis, “in September or October.” Koca noted that seven vaccine candidates developed by Turkish scientists had progressed: “We have another inactive vaccine in development and the Phase 1 trial of a virus-like particle (VLP) vaccine is underway. An adenovirus-based vaccine will start its Phase 1 trial in a few weeks,” he added.

A drop in cases

Turkey relies on a combination of vaccination and recoveries to develop mass immunity, while it strives to respond to a third wave of the pandemic. Data from between April 24 and April 30, one day before the start of the lockdown, shows the weekly number of cases decreased all across the country in that period.

Weekly cases are analyzed based on their number per each 100,000 population. A color-coded map was also introduced by Health Ministry to show the risk level of each province, based on weekly cases per 100,000 but it has not been updated since late March. Instead, Health Ministry prefers releasing weekly numbers as most provinces failed to downgrade their risk status.

The latest figures show the number of cases dropped in each province compared to the week between April 17 and April 23. Çanakkale has seen a drop at nearly 400 cases, to 439, while Istanbul experienced a similarly dramatic drop at around 322, to 532. Giresun and Tekirdağ, which failed to decrease their numbers, managed to bring them down in the last week of April.

The capital Ankara now has an average of 361 cases while the country’s third-largest province Izmir saw weekly cases dropping to around 223 from 335, per 100,000 people.