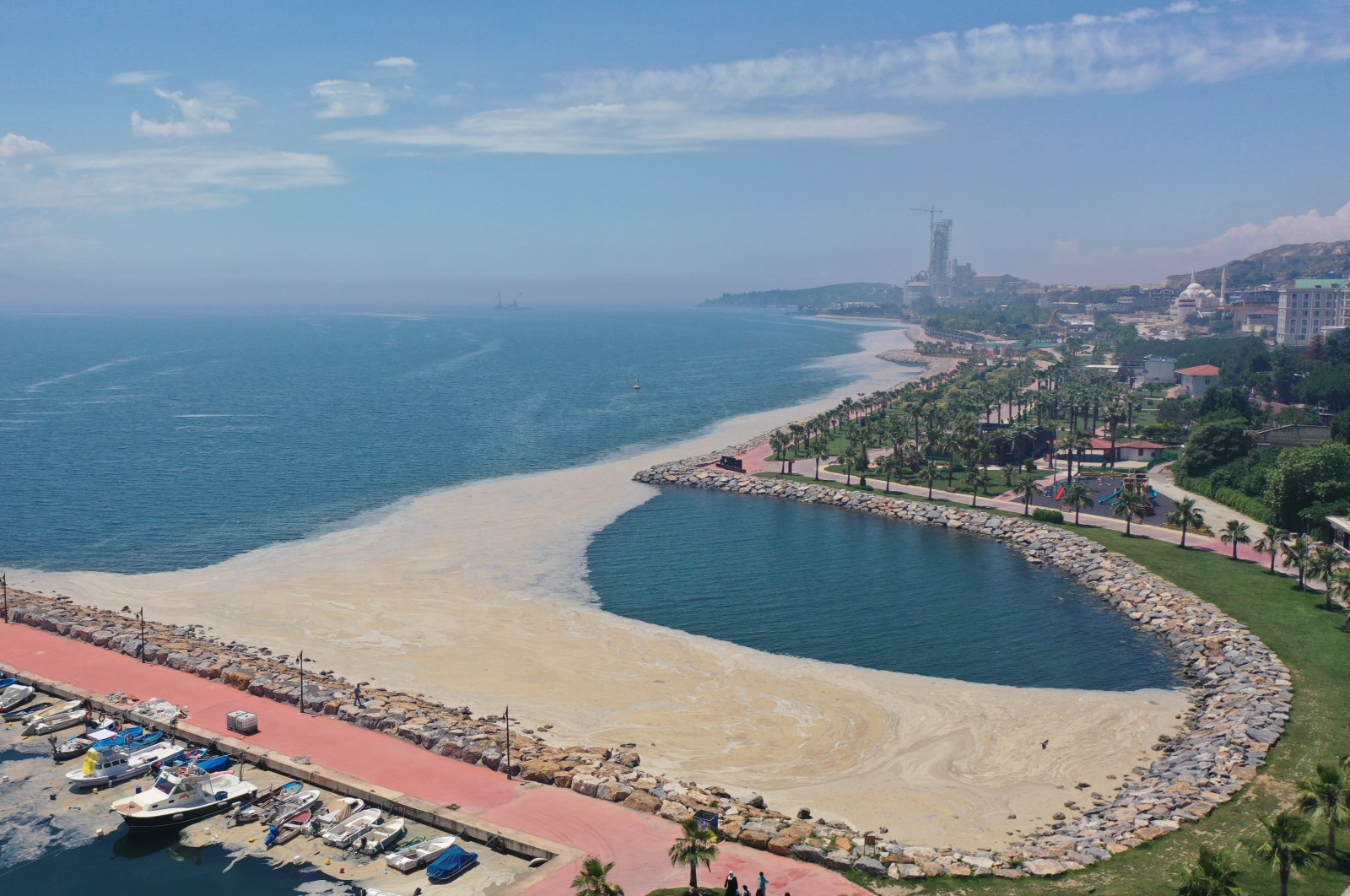 Days after the launch of a cleaning campaign against ubiquitous 'sea snot' covering the Marmara Sea, authorities plan to inject oxygen in some spots to revive marine life affected by the phenomenon

As marine mucilage, better known as "sea snot," continues to threaten marine life in the Marmara Sea, the government is seeking ways the save the flora and fauna at its depths.

As part of the efforts on Tuesday, oxygen will be pumped into a depth of 30 meters (98 feet) at five different spots of the landlocked sea, including four places in the Gulf of Kocaeli and a location off the coast of Istanbul’s Pendik district.

The aim is to minimize the impact of sea snot, a thick, slimy substance that has taken hold for months at sea, reducing oxygen levels for fish, other marine creatures and plants. Sea snot is an overgrowth of microscopic algae called phytoplankton.

On June 8, the government launched a massive cleaning campaign to fight the sea snot, after announcing a long-term action plan. Cleaning crews aboard boats and on the shore collect mucilage in Istanbul, Kocaeli, Bursa, Balıkesir, Yalova, Çanakkale and Tekirdağ provinces.

Advanced devices will be used for oxygenation, something that worked in other countries fighting sea snot, according to authorities. If the work pays off in pilot locations, after a test process of up to eight weeks, the devices will be used elsewhere in the wider Marmara region.

Environment and Urban Planning Minister Murat Kurum told Anadolu Agency (AA) Monday that oxygenation was one of the most important steps to preserve the ecological balance in the Marmara Sea. He said they were conducting studies for permanent solutions to the issue, with mechanical solutions and microbiological intervention.

Last week, a group of scientists managed to clean mucilage off the coast of an Istanbul district by introducing marine bacteria to fight the sea snot. Kurum said oxygenation has already been successfully used in some lakes to boost oxygen levels.

Cleanup crews managed to collect more than 4,555 cubic meters of mucilage in nearly 12 days after the launch of the cleaning campaign, while strong winds also helped the disposal.

The authorities also suspended the activities of 14 industrial facilities polluting the Marmara in the same period.

Pollution, stemming from the untreated waste disposal into the sea, is among the causes of sea snot, which is worsened by a change in seawater temperatures due to climate change.

The mucilage was detected this January before it intensified and expanded in April, resulting in a serious problem contrary to previous examples, which usually disappeared in a month or 45 days. As it continued to increase in its intensity in May and June, Turkish authorities on June 6 announced a comprehensive action plan to clean up the Marmara Sea.

Associate professor Mustafa Yücel, deputy director of METU’s Institute of Maritime Sciences, says their findings showed sea snot was amassed in an area with 30 meters deep and had yet to settle deeper. He also said hydrogen sulfide, found to be at dangerous levels in a part of the Marmara by another team of scientists earlier, was below the risk limit.

Yücel told AA that the sea snot has not widely affected the depths of the Marmara yet, but oxygen levels were low in some parts. Yücel said the ongoing action plan and "patience" may help oxygenation of the Marmara with the aid of fresh currents from the Mediterranean Sea.

Mucilage, which causes visual pollution and a bad odor, is said to be a serious threat to the marine ecosystem.

While mucilage prevents oxygen transfer by covering the sea's surface, experts say it also kills nonmotile or immobile organisms such as mussels, oysters and pina, particularly sponges and corals. Fish larvae and eggs are also severely harmed by mucilage. Experts have also predicted that the fishing industry will suffer as a result of this situation in the coming years. The tourism sector around the Marmara Sea, mostly comprising of small family businesses that cater to domestic visitors, is also expected to be affected.

The first sighting of mucilage was recorded in the Adriatic Sea in 1729. According to reports, mucilage has been constantly present in that region since the 1900s, and scientists have conducted various studies on the issue.

Experts point out that sea snot was observed in coastal areas where the human pressure was high in the 1990s and that a similar situation occurred in the Adriatic Sea in 2007 and 2008. During the 2007-2008 period, countries with coasts on the Adriatic Sea gathered to tackle the mucilage problem, and they mostly solved the issue due with a long-term plan and coordination.

However, sea snot is not the only danger facing the Marmara Sea, another team of scientists warns. Researchers from Istanbul’s Yıldız Teknik University (YTÜ) have reported a mass of microplastic pollution off the coast of the city. After one year of research, they found that at least 60,000 microplastics were present in 1 square kilometer (approximately half a square mile) of the Bosporus.

Professor Güleda Engin, one of the researchers, said emergency measures are needed before microplastic pollution “booms like mucilage.” Engin said microplastic pollution was particularly overwhelming in the Golden Horn, a well-known inlet of the Bosporus, in locations where wastewater is discharged without proper treatment.

“Microplastics are firstly harmful to fish and then for human beings. Through the food chain, they reach human beings. They collect heavy metals, toxic materials and through fish consumption, it enters the human body,” she warned.

Engin told Demirören News Agency (DHA) on Monday that microplastics have become more prevalent, especially in harbors, and they predicted that, by 2050, they would be as common as sea snot in seas.

Associate professor Hanife Sarı Erkan, who took part in the research, says industrial and social activities caused microplastic pollution, according to their observations conducted at some 48 monitoring stations across the Bosporus.

“The situation is especially alarming in the Golden Horn. The Kağıthane and Alibeyköy streams flowing into Golden Horn have a massive microplastic load in particular,” she said. “In the coming years, there will be more microplastics than fish in seas. We have to reduce the use of plastics, especially single-use plastics like straws, forks and spoons,” she warned.