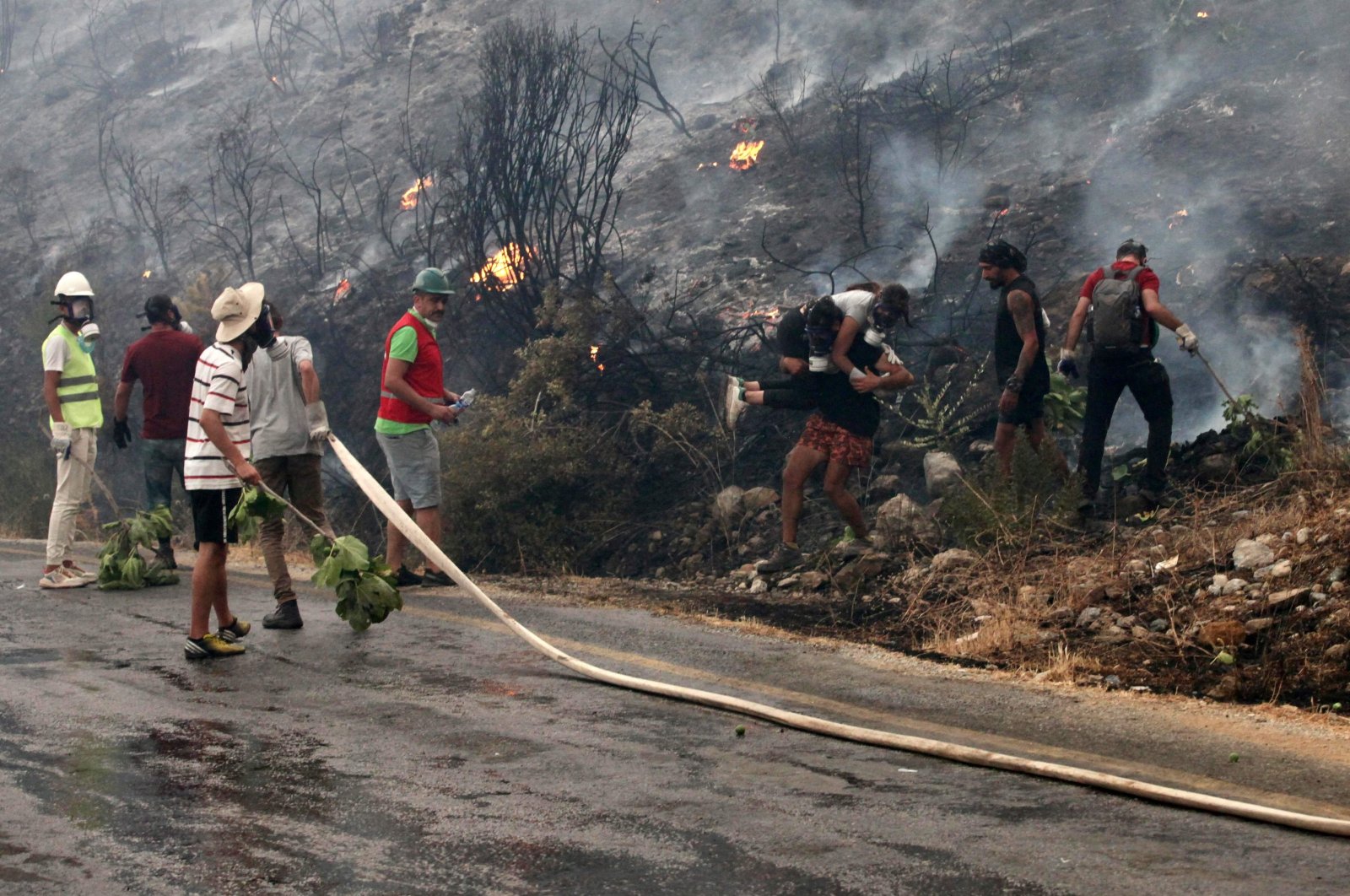 The catastrophic wildfires that have devastated Antalya and Muğla in Turkey’s south have also ignited a spirit of solidarity throughout the nation. Everyone, from celebrities to people from neighboring towns, has joined efforts to extinguish fires that have been burning for a week. Some carry water in bottles, others donate everything they can afford that is needed to combat the fires, from masks to batteries for radios used for communication by firefighters.

When local forces were overwhelmed with sporadic wildfires, Turkey rushed to their aid. From every province of the country, fire trucks, firefighters, search and rescue crews and forestry workers descended on Antalya and Muğla where the worst fires out of dozens raged on. Civilians of all ages also joined the efforts to sustain the energy of firefighters and volunteers, bringing bottles of cold water to the “flame warriors,” as they are dubbed on social media. Charities set up coordination centers in two provinces to organize aid efforts and set up meal distribution points for people who lost their homes in the fires. Police and gendarmerie troops are also at the forefront of efforts to contain fires and prevent new ones.

The government funneled $2.7 million (TL 23.5 million) to the disaster-hit areas to help survivors and pledged more in the coming days. The Union of Chambers and Commodity Exchanges of Turkey (TOBB) allocated $592,000 for the reforestation of burned places. A bank account set up by Antalya Governorate also sees cash aid pouring in for areas affected by the fires.

Charities deliver food and other aid to disaster zones while some charities are mobilized to rescue and treat animals affected by the fires.

Disaster and Emergency Management Authority (AFAD) set up tents and prefabricated units in fire-hit areas in Antalya, Muğla, Mersin, Adana and Osmaniye to accommodate people left homeless by fires while delivering three meals a day to thousands in disaster areas. The Turkish Red Crescent (Kızılay) has delivered meals for more than 65,000 people daily since last week. The charity’s president Kerem Kınık told Anadolu Agency (AA) on Wednesday that they also had more than 3,300 people on the ground who delivered aid, from food to hygiene kits, to some 300,000 people.

Ali Samet Özkurt, deputy director of a charity based in the northwestern province of Sakarya, said they arrived in Manavgat with 200 volunteers, who worked in humanitarian aid and assisting firefighting efforts. “We have volunteers from all around Turkey, from doctors to divers, people from all walks of life. We are specialized in aid in big fires,” he said.

Fadıl Akgün arrived from Adıyaman province, along with a group of professional firefighters, three days ago and is working day and night to help. “It does not matter wherever the fire is. We do everything to protect our forests,” he said. Hasan Gündüz, from the fire department of the western province of Uşak, has been working in Marmaris for the past four days. “I worked in all recent earthquakes and big fires, all across Turkey. Now I am here. Everyone from all around the country is here. We have one heart beating for this country and everybody helps us to put out the fires. I want our nation not to worry about the situation here. We will overcome this,” he said.

Emin Yıldız, another firefighter from Balıkesir, said all the firefighters sent to disaster areas across the country worked “as one.” “For instance, we receive water from fire truck of Uşak fire department and we supply water to police’s riot control vehicles fitted with water cannons to put out the fires,” he said. Yıldız described Turkey as “a strong nation,” underlining how immensely helpful the people are. “Firefighters working here have no need because we have everything we need thanks to people helping us,” he said.