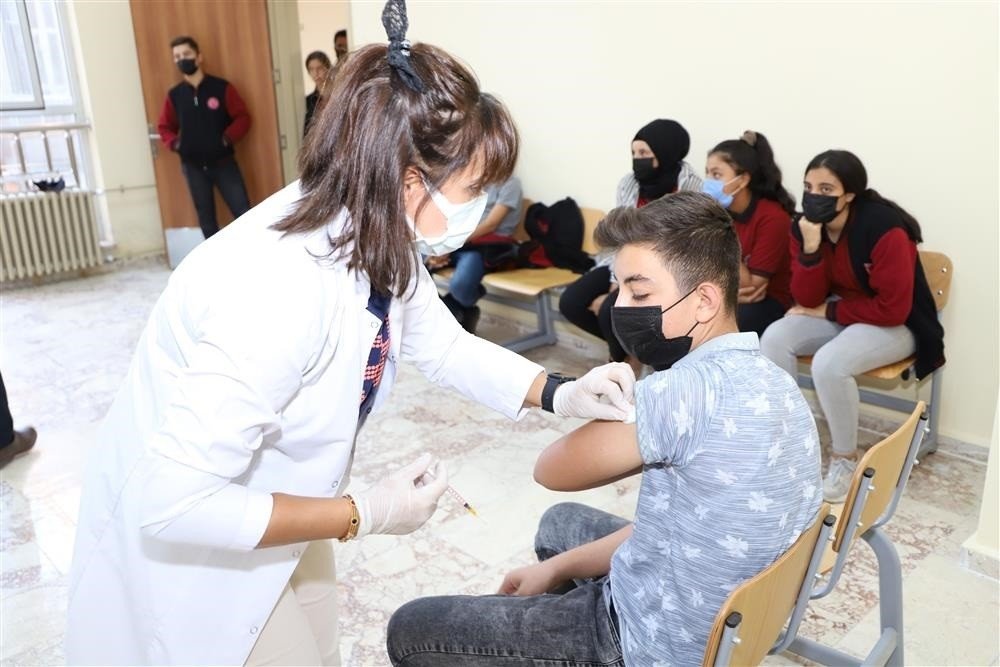 Having extended the outreach of its vaccination drive against the coronavirus over the past couple of months, Turkey has now vaccinated at least 77% of its adult population

After achieving momentum in its vaccination program, Turkey has managed to administer two doses of coronavirus vaccines to more than 77% of its population aged 18 and above, providing a sense of relief as a new wave of the pandemic builds. Two doses are viewed as necessary to ensure protection against the deadly disease, or at least to fend it off while experiencing milder symptoms.

The number of vaccine doses administered since the vaccination program kicked off in January has exceeded 115 million in the country. Şanlıurfa in the southeast is now the only province with a vaccination rate below 55% while all other 80 provinces reported progress in inoculating the majority of the eligible population.

In 14 big cities including the capital Ankara and Izmir, vaccination rates surpassed 75% while Istanbul, Bursa and other big cities are close to being included in the “low-risk group” designated by the Health Ministry for regions with high vaccination rates.

The relative success of the vaccination program is linked to a summer upgrade to it that lowered the eligibility age to 15 and opened up jabs for children aged 12 and up if they have a chronic disease. Awareness campaigns by Health Ministry also contributed to the increase in the number of vaccinations though vaccine hesitancy still prevails in some provinces.

More than 48 million people now have received two doses of the vaccine. The country offers CoronaVac, an inactive vaccine developed by China’s Sinovac, and a messenger RNA (mRNA) vaccine developed by Pfizer-BioNTech. Turkovac, a locally made vaccine now in Phase 3 trials, is also expected to be available soon.

Professor Tuba Dal, a microbiology expert from Yıldırım Beyazıt University in the capital Ankara, says people should have their “missing” shots for protection against coronavirus before winter, a time where coronavirus cases are expected to peak again with more people spending time indoors. “More than 95% of coronavirus patients in intensive care are either people who are not vaccinated or those with only one dose of vaccines,” she said. Dal added that the pandemic would lose steam further as the rate of people with third doses or “booster” shots substantially increases across the country. So far, nearly 11 million people have had their third dose of a vaccine.

The first coronavirus cases in the country were reported in March 2020, and in the early days of the pandemic, the disease most affected elderly people with chronic illnesses. However, it has since become more prevalent among the youth according to health authorities. Experts blame the change on the reckless behavior of younger people who ditch mandatory masks, fail to social distance and don't follow hygiene rules. Younger people also make up a considerable portion of the unvaccinated population, either due to their uncertainty about the new vaccines or because they have bought into anti-vax conspiracy theories circulating on social media.

Virus cases recently skyrocketed, reaching the highest level seen in months. Indeed, the country reported the highest number of cases this month since a 17-day COVID-19 lockdown earlier this summer that is credited with bringing down the soaring case numbers last spring. The lockdown was followed both by the lifting of most restrictions, including curfews, and an expanded vaccination program. Though an elevated number of cases coinciding with a higher rate of vaccination may appear contradictory, experts say the fast-spreading delta variant, which now makes up a majority of the cases, may also be the culprit in the new wave of infections.