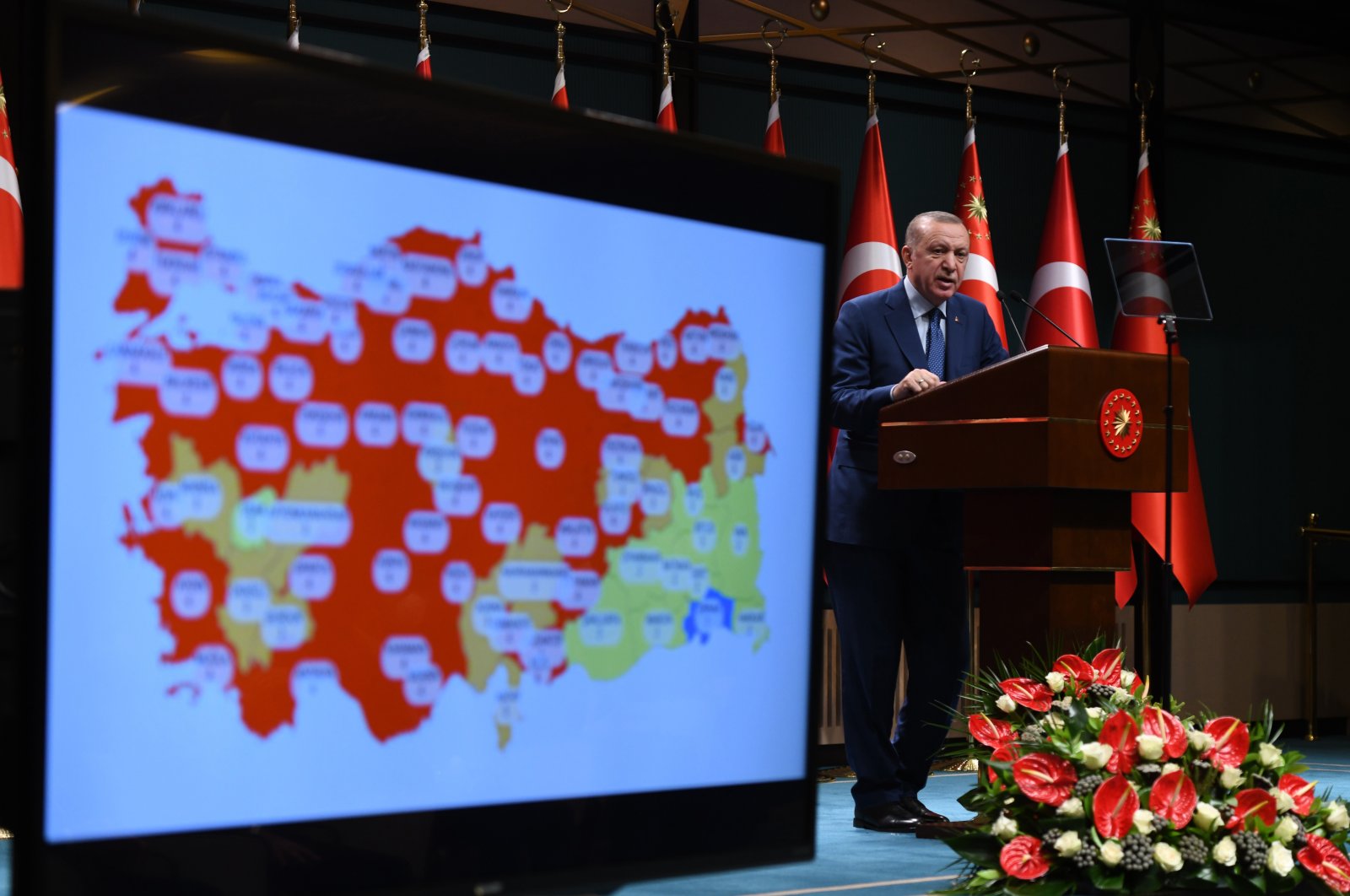 A color-coded map on the current state of the coronavirus pandemic in Turkey is seen alongside President Recep Tayyip Erdoğan, who is speaking during a press conference in the Presidential Complex in Ankara, Turkey, March 29, 2021. (IHA Photo)
by Daily Sabah Mar 29, 2021 8:48 pm
RECOMMENDED

“Weekend curfews will again be in place on Saturdays,” President Recep Tayyip Erdoğan said in a statement late Monday in a press conference in Ankara, pointing to the rising COVID-19 cases across the country.

“During the month of Ramadan, restaurants and cafes in Turkey will only be allowed to deliver food as part of the measures against the COVID-19 pandemic,” he added, underlining the government’s plan to avoid rising infections during the holy month when it is a tradition to gather for the iftar and sahur meals, which indicate the end and start of fasting, respectively.

Meanwhile, Turkey’s new color-coded coronavirus map has been released, which showed a dramatic increase in caseload as a majority of the provinces have become “red.”

Provinces at the highest risk are coded “red.” High-risk provinces are coded “orange,” while medium-risk areas are coded “yellow.” “Blue” indicates the lowest risk. Color-coding has been in force since March 1.

The country has also reported over 32,400 new coronavirus cases, pushing its overall tally above 3.24 million.

As many as 32,404 infections, including 1,325 symptomatic patients, were confirmed over the last 24 hours, according to the Health Ministry.

At least 18,015 more patients won the battle against the disease, taking the number of recoveries past 2.97 million.

Turkey began a mass COVID-19 vaccination drive in early January and has administered over 15.1 million jabs to date, according to official figures.

More than 8.5 million people have received their first doses, while over 6.6 million have completed a two-dose course.

Erdoğan also touched upon the recent economic developments and underlined the importance of investment.

“Turkey is becoming not a regional but a global center for trade and production,” he said.

“I am calling upon all investors to come here; the ones who previously invested in Turkey have started to reap the fruit.”

“Turkey once ranked 84th out of 175 countries in the ease of doing business index, now it ranks 33rd out of 190,” Erdoğan emphasized. “This is an indicator of the strong foundations we've built.”

The President also touched upon the Turkish government’s plan to draft a new constitution.

“We are open to any and all suggestions with regards to the making of the new constitution,” he said. “The fundamentals of the current one are unfortunately based on a pro-coup mindset and thus it needs to change.”

The president’s proposal came four years after the 2017 constitutional referendum asked voters to decide on an 18-article bill to switch from a parliamentary to a presidential system, among other changes. The amendments to the constitution were jointly introduced by the ruling Justice and Development Party (AK Party) and the Nationalist Movement Party (MHP). Erdoğan was elected president under the new system in 2018.