COVID-19: Variants dominate new cases but no 'peak' yet in Turkey 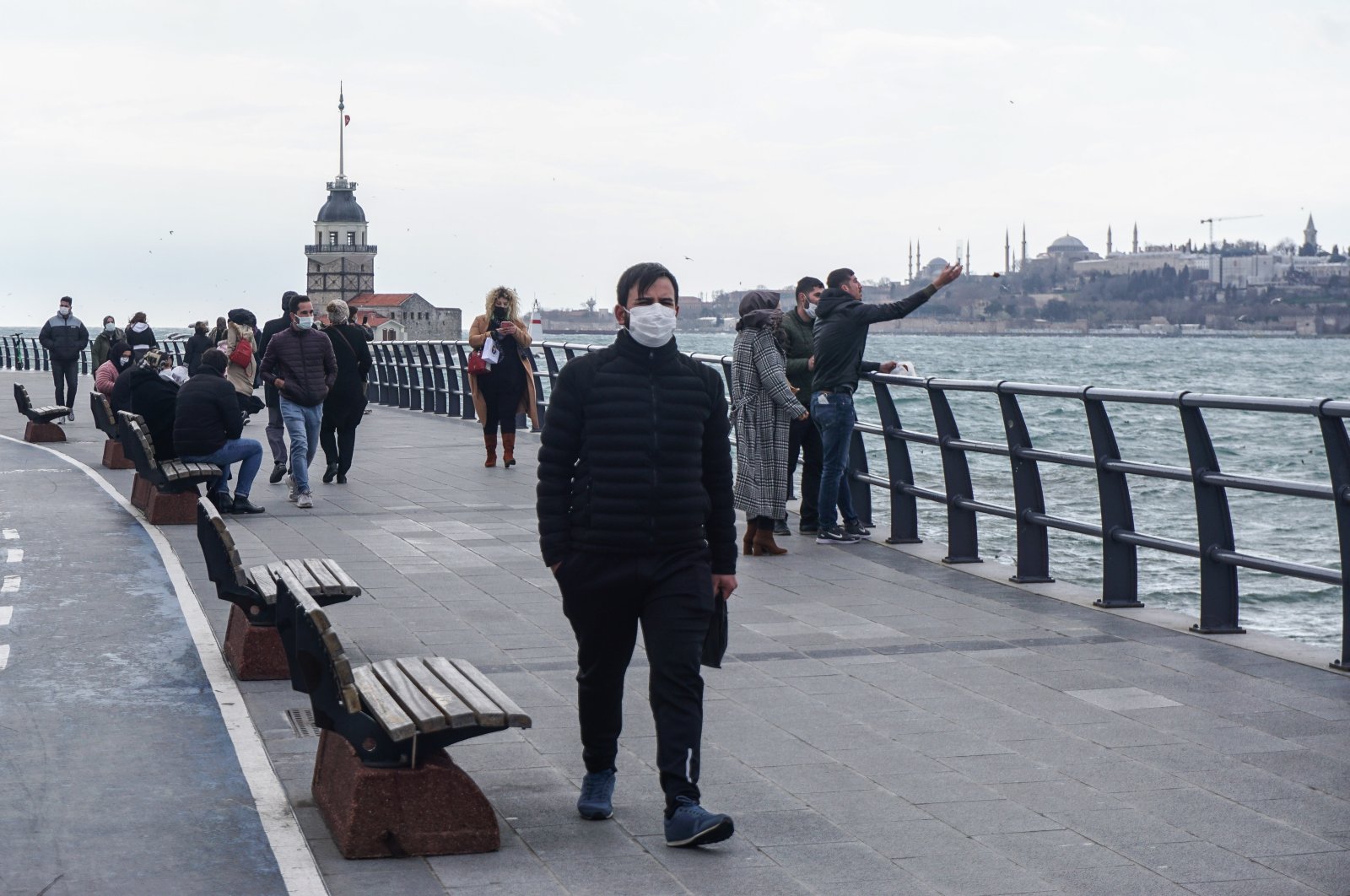 A man wearing a facemask as a precaution against the spread of COVID-19 walks by the seaside in the Üsküdar neighborhood of Istanbul, Turkey, March 16, 2021. (Reuters Photo)
by DAILY SABAH WITH AGENCIES
Mar 31, 2021 9:42 pm

Health Minister Fahrettin Koca has announced that 75% of coronavirus cases in Turkey stem from the U.K. variant, while experts warn that the third wave of the outbreak has yet to peak, urging people to be more cautious

Turkey's outlook seems dire as the number of daily coronavirus cases in the country hit nearly 40,000, the highest since March 2020, when the pandemic first took hold of the country. Experts warn that the anticipated fall in cases, as is the trend after numbers skyrocket, has yet to begin as variants from abroad prompt concerns in the meantime.

The U.K. variant accounts for 75% of all recent cases in the country, Health Minister Fahrettin Koca said in a statement late Wednesday.

According to the figures the minister shared on Twitter, Turkey has so far registered 180,448 U.K. variant cases in 81 provinces and 169 cases of those infected with the South African strain across 11 provinces. A total of 39,302 cases, including 1,401 symptomatic patients, were confirmed across the country in the last 24 hours. Turkey's overall case tally is now over 3.3 million, while the nationwide death toll has reached 31,537 with 152 more fatalities over the past day. As many as 19,193 more patients recovered from the virus, bringing the number of recoveries to over 3 million. More than 38.5 million coronavirus tests have been conducted in Turkey to date, with 240,012 done since Tuesday. The latest figures show that the number of COVID-19 patients in critical condition stands at 2,082.

Koca said one thing was certain in the outbreak: that the virus is still as severe as it ever was, criticizing the public for failing to take the seriousness of the situation into consideration. “This resulted in an increase in the cases,” he added, in statements released after a meeting of the Health Ministry's Coronavirus Scientific Advisory Board.

Professor Mustafa Hasöksüz, a member of the board, says that the U.K. variant was “definitely” one of the most important factors in the surge. “In the past, a person in one household would infect only one other but now, she/he can infect all members of the household. When people working in enclosed, crowded environments were infected with the variant, the risk to households multiplied,” he told the Hürriyet newspaper on Thursday. Professor Necmettin Ünal of Ankara University's Faculty of Medicine says Turkey needed to tighten measures. “We have not reached the peak in the cases yet. We are on the same level with Europe in terms of waves of the outbreak. Turkey now leads in Europe in the number of daily cases. The solution is speeding up the vaccination and tightening restrictions without delay,” he said.

Ünal said that the surge would continue. “Some 3 million people had the coronavirus and when asymptomatic patients are included in this figure, it reaches 10 million to 15 million. We cannot be certain whether those people developed immunity because there is the fact that some who had mild cases and recovered did not have strong immunity. We also don’t know how immune those who had the original coronavirus and recovered are to new variants,” he warned.

For Istanbul, which recorded the highest rise in cases in a week, is a third “peak” is in the works, according to the city’s top health authority. Professor Kemal Memişoğlu, head of Istanbul Directorate of Health, told Anadolu Agency (AA) on Thursday that there may be a bigger “wave” coming, like the one they encountered in November 2020, shortly before the country introduced tight restrictions. “Everybody should be more sensitive in terms of following the rules in the next 15-20 days,” he said. The rules he refers to include wearing a protective mask, maintaining social distancing and practicing good hygiene. Authorities often remind the public not to go out unless necessary. “We are facing a third wave but we have fewer hospitalizations compared to figures in November 2020. On the other hand, we have seen a steady rise in the rate of people whose tests turn out positive,” he said. Based on the previous course of the outbreak, they expect a further increase within a few weeks before the cases begin to decline, he added. “But the severity and length of this rise depend on people’s compliance with measures. Our current projections are foresight based on similar outlook last year,” he said.

According to Koca, the course of the outbreak depends on public compliance to restrictions until mass immunity can be achieved with the aid of the national vaccination drive. “We have a responsibility to wait while being cautious. March started and ended with easing restrictions but unfortunately, 58 provinces where 80% of the population lived turned into ‘very high risk’ provinces in one month. Still, we should have faith in success against the outbreak,” Koca said in his statement on Wednesday.

Vaccination is key to curb the numbers in this third wave. Turkey so far delivered 16.1 million doses, including 6.9 million second doses to its citizens. After CoronaVac, it acquired the Pfizer-BioNtech vaccine. Koca said the country currently has 2.8 million doses of the Pfizer-BioNtech vaccine but that this number will reach 4.5 million within 10 days with new shipments.

A full lockdown may help to curb the surge, according to some experts but it is a tough call for the country which is seeking to balance economic challenges and address the complaints of millions subject to stifling curfews.

The government eased measures to curb the pandemic in Turkey earlier this month. On Monday, President Recep Tayyip Erdoğan announced a tightening of measures, including the return of full nationwide weekend lockdowns for the Islamic holy month of Ramadan, which will start in two weeks.

Professor Levent Akın, a member of the Coronavirus Scientific Advisory Board, says a full lockdown cannot be implemented solely based on the rise in cases. “It can be considered only if the cases increase so much that you face the risk of shortage of hospital beds or the fatalities escalate more than anticipated. A full lockdown may be a heavy burden for the public, but we should not shy away from implementing it if it is absolutely necessary,” he told Demirören News Agency (DHA) on Thursday.

“A full lockdown necessitates more social support, and we hope we won’t reach that level in the cases. People have to take their own measures, so we won’t see a full lockdown,” he said. Akın said the current state of hospitals, in terms of response to the number of coronavirus patients, was fine, but this may change. “I don’t know any hospital that cannot admit new patients due to their capacity, but numbers escalate rapidly. We occasionally see severe cases too,” Akın, who also works at the Faculty of Medicine at Hacettepe University in the capital Ankara, said. “We will see a real challenge in 15 days ensuing the surge in cases. We have to take measures before hospitals are burdened with an excessive number of patients who may end up in intensive care in the next two weeks,” he warned. Like other experts, Akın is depending on mass vaccination to lessen the impact of the outbreak. “We will see our burden relieved when we inoculate at least 50 million people. Certainly, there will still be COVID-19 patients, but the health care system will be less burdened then,” he said.