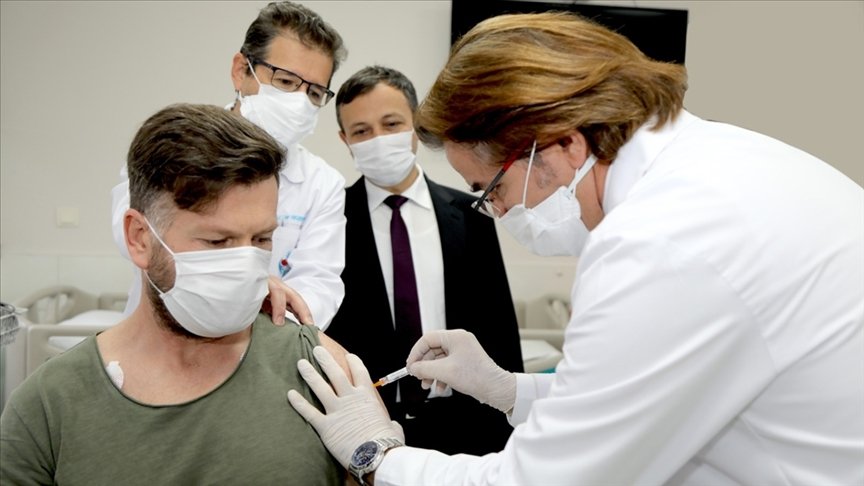 ERUCOV-VAC, a vaccine against the coronavirus developed locally, will start the second stage in human trials in weeks while Turkey speeds up innoculation efforts

Officials say the Phase 1 human trials of ERUCOV-VAC developed at Erciyes University in central Turkey will conclude on Dec. 14. and that Phase 2 may begin two days later. If the vaccine is proven to be effective, it will be added to Turkey's growing arsenal of vaccines to put an end to the coronavirus outbreak in the country. Turkey announced it had received a shipment of the Chinese vaccine earlier.

Ahmet Inal, deputy director of the university's research center where trials are being conducted, says they had 44 volunteers for the first phase, and they were planning to inoculate some 200 volunteers in the second phase. He noted that they have already received more than 100 volunteer applications.

ERUCOV-VAC is the vaccine closest to being ready, among those being developed locally across Turkey by scientists and pharmaceutical companies. It started human trials in early November. No serious side effects were reported following the first round of inoculations on volunteers and a second dose was administered on Nov. 26.

Inal told Demirören News Agency (DHA) on Sunday that the initial data indicated that the vaccine was so far safe and called the public to “break their prejudice” against vaccinations and volunteer. “The higher the number of inoculations, the higher the immunity among people will be,” he said. “Vaccination is the best way to protect ourselves from the pandemic,” he stressed.

Turkey reported more than 533,000 COVID-19 patients since the start of the outbreak in the country in March while the number of recoveries exceeds 427,000. On Saturday, it reported 196 fatalities, the highest number of daily fatalities, bringing the total death toll to 14,705.

Plans are underway to launch mass vaccinations using CoronaVac, developed by China’s Sinovac, after Dec. 11. Authorities are also in talks with Pfizer and BioNtech for their collaborative vaccine, as well as with Russia. Some 10 million doses of vaccines are expected to be shipped to the country later this month, Health Minister Fahrettin Koca announced on Dec. 1. He has said that more would be delivered in the coming months. Health care workers and senior citizens will be the first to be vaccinated.

Authorities announced earlier that two of 13 of the country's locally made vaccines were approaching the human trial phase. Turkish scientists are also working on 10 projects developing drugs against the deadly disease.

Inal says it is not clear how long the immunity will last, but they expect the vaccines to provide immunity for six to eight months. “In case it lasts six months, we will need 328 million doses. This is a high number, and you should be able to manufacture it,” he said. The advantage of a local vaccine is that it addresses the concerns of skeptics, according to Inal. “People express concern about imported vaccines, whether they contain something that would have a genetic effect. They may view a local vaccine as a safer option. It contains entirely known efficient ingredients. When it is ready, it can also give hope to people in other countries,” he said.

A member of Turkey's Health Ministry’s Coronavirus Scientific Advisory Board says it is not a matter of origin but efficacy and safety. Afşin Emre Kayıpmaz told Ihlas News Agency (IHA) on Sunday that the public should ignore speculations about imported vaccines. “People should not listen to this. They should listen to scientists and the Health Ministry,” he stressed. Kayıpmaz noted that the vaccines would only be delivered to the public after a state-run pharmaceutical authority approves them, and this would take some two weeks. “Certainly, the vaccine is not a magic wand that will completely end the pandemic. After the vaccination, for a while, we have to keep complying with rules like wearing protective masks, adhering to social distancing and staying away from crowds.