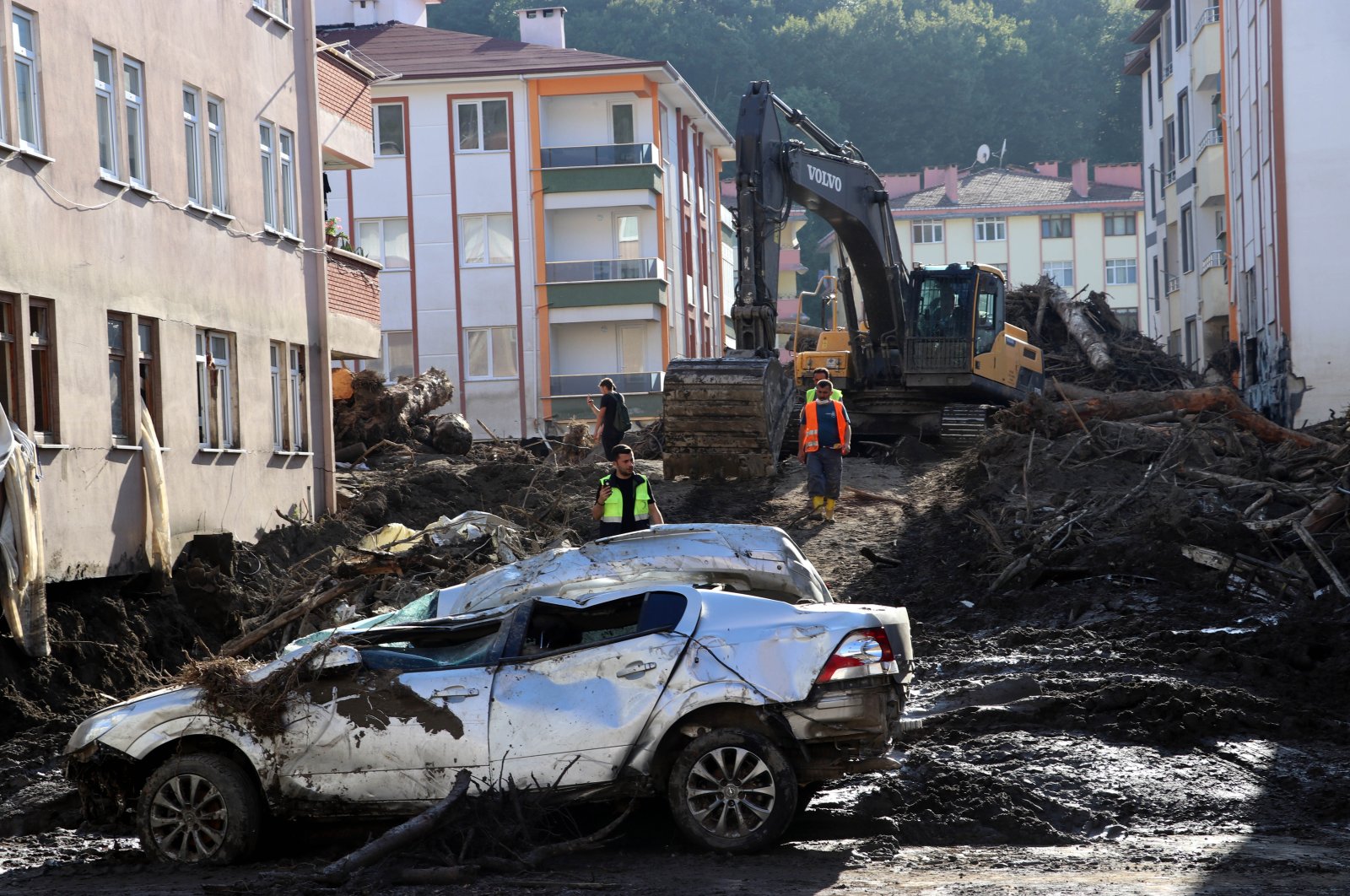 One week after floods swept away buildings, Kastamonu and Sinop in the country’s north strive to get back on their feet. Recovery efforts are underway with rescue crews combing the debris for signs of the missing after the deadly disaster

The constant whir of bulldozers, trucks and other heavy vehicles interrupts the eerie silence in the once quiet town of Bozkurt. Bozkurt, which has a population below 10,000, was one of the two worst-hit places when torrential rains triggered floods last Wednesday. Days after the disaster that carried away desperate locals and tore down multi-story buildings, the town is crowded with crews who have arrived from all across the country. From soldiers to volunteer groups, everyone is helping the locals clear the mud and debris piled up on the streets. On the banks of the Ezine Stream that passes through the town, meanwhile, crews scour the wreckage of apartment buildings whose foundation was eaten away by massive floodwaters.

According to the latest figures by the Disaster and Emergency Management Authority (AFAD) late Monday, 62 people died in Kastamonu and another 14 people perished in Sinop. In Bartın, one person died. AFAD said that seven people are still hospitalized for injuries sustained during the floods. The agency had earlier announced that more than 40 people were unaccounted for. The floods on Aug. 11 were unprecedented for Bozkurt and led to the evacuation of hundreds of residents trapped on the rooftops of houses. It rendered a large number of houses and shops uninhabitable, as raging waters overflowing the banks of the stream either destroyed walls or inundated the buildings up to a few floors high.

Daily life is at a standstill, apart from the bulldozers, excavators and trucks driving back and forth, carrying debris. Soldiers have set up mobile bridges along the stream that separates the two sides of the town so tanks and troops can cross.

Erol Aydın, who operates an excavator, says he has been in the town for the past four days, moving the debris left by floods. His vehicle removes big chunks of the debris before search and rescue crews move in and check if anyone is trapped below. Once it is “clear,” bulldozers take over, carrying the debris into trucks. Aydın says he was impressed with the unity of people on the ground. “I am doing this job since 1990 but I have never seen such a team spirit, such passion. People are working around the clock to clean up Bozkurt. I am proud of the work they are doing here,” he told Anadolu Agency (AA) on Tuesday.

Another crew, consisting of search and rescue workers, is working to gradually demolish an apartment building that was heavily damaged in the floods. A building located next to it did not suffer damage but was still at risk. Locals who had evacuated from the building earlier moved their furniture out of the building on Tuesday. More than 5,000 people are on the ground in Kastamonu to aid the recovery and rescue efforts, flanked by helicopters, drones, boats and sniffer dogs. Helicopters proved the only means of evacuation for some 1,480 people in flooded Bozkurt.

The Turkish Red Crescent (Kızılay) plays a key role in the aftermath of floods by supplying hot meals to displaced people. Volunteers from the country’s top charity also joined in the search and rescue work. Apart from serving meals from mobile kitchens, it delivers bread and water to survivors while its “psycho-social support” teams visit the survivors regularly to help them cope with the trauma of the disaster.

The town, along with nearby villages, was without power since the floods broke out and mobile power supplies were dispatched to the region. Minister of Energy and Natural Resources Fatih Dönmez announced on Tuesday power supply to affected places in Kastamonu had been fully restored while the work was underway to restore power to some villages in Sinop. The government allocated funds to the region and started delivering cash aid to survivors. AFAD also launched an aid campaign that has received over $15.6 million (TL 131.4 million) in donations so far.

Still, the losses are nothing for some survivors, compared to “memories.” “I am sorry most for losing our family album,” Idris Şekerci says. Şekerci escaped the floods with his wife and son by driving to higher ground. Their first-floor apartment in central Bozkurt was completely inundated with floodwaters. He examined what was left behind on Tuesday, scouring the mud covering the walls and floor. Finding black and white photos of his parents covered with mud, he could barely hold back his tears. The Şekerci family was preparing to leave Bozkurt for a vacation when the torrential rains began. “A car pulled over in front of the house and the man inside shouted a flood was coming,” he recalled, describing the first moments of disaster to Anadolu Agency (AA). “We jumped into our car and drove outside the town. We waited for a while and when we returned, we saw waters covering everywhere. Cars were floating on floodwaters,” he said. The family returned to their home after the floodwaters receded to find the house they had moved into just a year ago had been devastated. “We moved here from (central) Kastamonu to isolate ourselves from the coronavirus pandemic. We had everything here and now all is gone,” he lamented. “We lost everything, from sofas to the refrigerator and washing machine, but I don’t care. We can always buy new ones. But we lost things special for us, like photo albums. I lost pictures of my mother, pictures of my wife’s parents. These cannot be replaced,” he said.

Musa Kartal, a shopkeeper, lost his store in the floods. “It is unlivable now. I could not salvage anything. But then, I could have died if I tried to get back in,” Kartal says. He said he almost “outran” floodwaters that reached “a height of about four meters.” He is now working to clean the debris from his shop and help in other places, together with other business owners. “We have confidence in the state. Bozkurt will be rebuilt and will be even better than before,” he says.