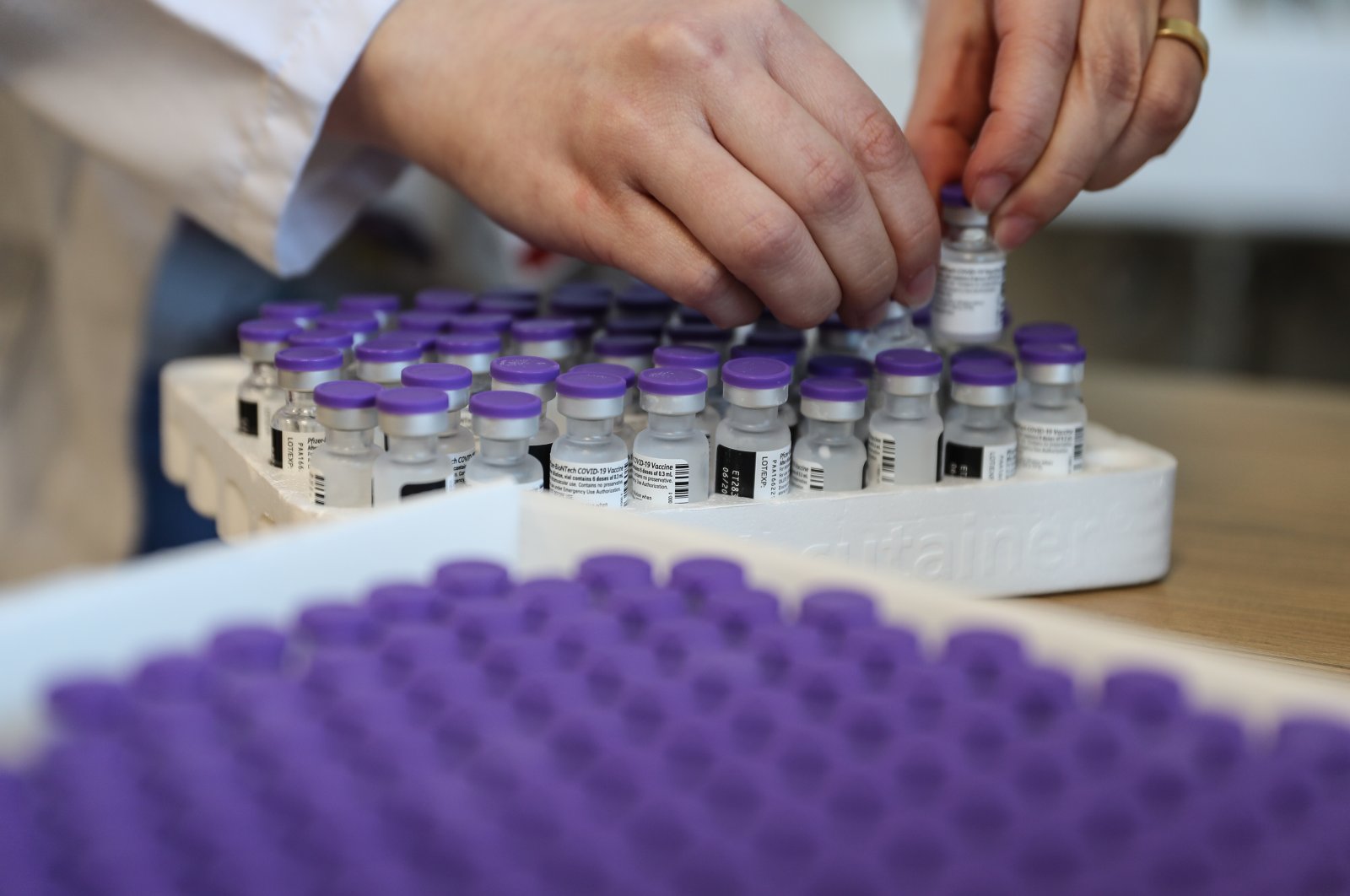 Unlike the CoronaVac, an inactive coronavirus vaccine administered in Turkey, Pfizer-BioNTech’s Comirnaty jab against requires extra caution during storage. To prevent any potential loss, hospitals and agencies, overseeing the distribution of these shots, scramble to ensure that not a single dose is wasted. It involves a meticulous vaccination schedule and sometimes calling people in early for their appointment if someone else fails to show up.

Turkey started administering the Comirnaty, a Messenger RNA (mRNA) based vaccine, last month. Yet, it also triggered a debate whether the vaccine is as enduring as CoronaVac when experts announced that any no-shows at inoculation appointments meant the allocated jab could be spoiled. Indeed, Comirnaty is not as good as its inactive equivalent when it comes to shelf life at low temperatures. This forces authorities to rearrange vaccine supply plans but luckily the country’s experience in handling “cold chain” vaccine logistics facilitates the task.

Still, elaborate plans are needed to ensure no losses of Comirnaty jabs. In Istanbul, the Directorate of Public Health gave journalists a tour of their vaccine storage units and explained how the vaccines were delivered to hospitals from there.

Vaccine refrigerators capable of keeping jabs in temperatures up to minus 80 degrees Celsius (minus 112 degrees Fahrenheit) and scheduling work are the biggest help to health care workers. The country also counts on a comprehensive vaccine tracking system which was available long before the coronavirus pandemic and allows the monitoring of vaccines from the moment they are shipped to warehouses to the moment they are injected into patients.

Dr. Önder Yel, an official at the vaccination department of the Directorate of Public Health, says the Pfizer-BioNTech vaccine presented them with a new challenge. “It requires strict rigor in terms of storage conditions and planning. You can store other vaccines in temperatures up to 8 degrees Celsius but this is not the case (with Comirnaty). You have to plan every move. But the most important thing for us is having citizens not skip their vaccination appointments,” he told Demirören News Agency (DHA) on Monday.

The vaccine tracking system allows authorities to see vaccine stocks at any given time at hospitals and accordingly, the correct amount of doses a hospital will need the next day are shipped the day before based on appointments. To prevent any problems that may arise over storage conditions, the vaccine is offered in limited means. While CoronaVac can be administered in all clinics and public and private hospitals across the country, while the Pfizer-BioNTech vaccine is confined to 38 public hospitals in Istanbul alone.

Every day, couriers are given doses from the directorate's storage units and send to deliver them to hospitals in vehicles fitted with the proper refrigeration units.

Başakşehir Çam and Sakura City Hospital on the city’s European side is among the top locations for the highest number of vaccinations. So far, more than 25,000 Comirnaty doses were administered to the public at the hospital. The hospital’s chief physician, assistant professor Idris Kurtuluş says they have the capacity to administer 4,500 doses a day.

“This is a vaccine that requires full cold chain compliance. When a citizen skips his/her appointment, we are faced with the problem of what to do with the dose that will not be used. This is a great responsibility for everyone, especially at a time when countries are scrambling for access to vaccines,” he says. Kurtuluş said they offered more flexible hours for appointments to encourage more people. Currently, the hospital offers appointments between 8 a.m. to 12 a.m. but at times, appointments are open up until 4 a.m.

Every vial of Comirnaty contains six doses and they have to be administered once the vial is opened. So, it is important to have six people in succession show up for their appointments. Otherwise, doctors and nurses race against time to find that sixth person. “We call people next in the appointment line when one person does not make it to his/her appointment. We are also in touch with other hospitals. For instance, when we have only one person waiting at the end of the day and we have one unopened vial, we contact other hospitals to check if they have vacant appointments. This person is directed to that hospital. We sometimes offer them a ride to another hospital or they send us a person for vaccination, all for not spoiling a vial,” he says.

More than 25 million doses of vaccine have been administered across the country so far but a small portion of the population, currently eligible for inoculation, are apparently resisting getting their shots. The Health Ministry and local authorities assign health care workers to each citizen reluctant to get their jab. Going door to door, they try to persuade vaccine skeptics. Once convinced, they are vaccinated at home mostly.

In Mardin, a southeastern province with a mixed population of Kurds and Arabs, the local health directorate’s call center reaches out to around 500 people every day, in calls in Kurdish, Arabic and Turkish. Though no concrete figures are available, Anadolu Agency (AA) reported that Mardin is among the provinces with the least number of vaccinations in proportion to its population. Dr. Cihat Adın, who heads the public health services in the province, says they contacted some 70,000 people and convinced some among them to have their shots.

Health care workers’ lengthy explanations over the phone on the benefits of vaccines and efficacy rates encourage skeptics to relinquish their false beliefs, ranging from alleged lethal side effects to their ineffectiveness.

Adın told AA on Monday that so far they have about 50,000 people who have received both doses of the vaccine in the province and were trying to reach out to more.

Cihan Kaya, a health care worker who works in a “vaccine persuasion team” says some people were reluctant to get their jabs because they were fasting for the Muslim holy month of Ramadan and believed the jab would spoil the fast. He says they offered jabs as well after iftar (a dinner for breaking the fast).

Kaya said others were “scared.” “We try to convince them that there is nothing to be afraid of. We talk about how it protects against the virus, how good it was in trials. If they are not convinced anyway, we hand the case to physicians in neighborhood clinics and they try to convince the citizen by visiting them again,” he said.

In Istanbul’s Sultanbeyli district, the district governorate is pursuing a campaign to convince the older generation. Governor Metin Kubilay told DHA that with the vaccine persuasion teams’ efforts to convince the public, the vaccination rate among people aged 65 and above in the district has reached 80%. Teams, comprised of health care workers, teachers, imams and civil servants visit households to persuade those reluctant to get the jab. They are volunteer members of Vefa Social Support Groups, a state-run initiative where crews visit elderly people and people with chronic diseases who are unable to leave their homes due to the pandemic, which affects them the most.

Fatma Can, a 70-year-old woman, was convinced to have her jab thanks to the efforts of Dr. Burak Kaya, head of Sultanbeyli Directorate of Health. Can, a frail old woman, says she was scared her health could worsen if she got vaccinated. Kaya told her that the vaccine was the only way to overcome the pandemic and his mother, who suffered from allergies, also had her shot. Can finally got vaccinated at the hospital and said she did not “feel anything.” “I recommend it to everyone,” she said.