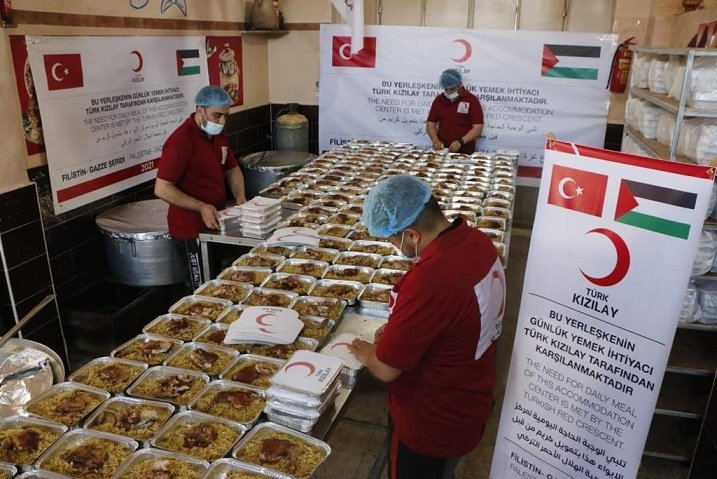 The Turkish Red Crescent (Kızılay) is on the ground to help the victims of Israeli violence in the Gaza Strip. The aid agency is distributing hot meals and planning to expand the project in collaboration with the Palestinian Red Crescent.

It said 40,150 people are taking refuge in 26 schools, including 14 schools in northern Gaza, 11 in central Gaza and one in Rafah.

The aid group will distribute the meals to residents at a primary school in Jabalia, northern Gaza, for 14 days during the first stage of the project and will continue to expand distribution with soup kitchens in the region in the coming days.

Kızılay teams working in the region are in contact with Palestinian Red Crescent officials and are working on the supply of urgently needed aid materials, according to the statement.

The Palestinian Red Crescent has asked for support from aid organizations, especially the Turkish Red Crescent, because of a lack of sufficient medicine and medical aid in Jerusalem and Gaza. It also has a lack of ambulances to get to those injured.

In coordination with a Palestinian delegation, Kızılay delivered medical equipment worth TL 500,000 ($60,000) to the Palestine Red Crescent to be used in hospitals during the first stage of the project, said the statement.

In the first stage, two small patient transport ambulances were ordered to transfer injured Palestinians to points where they can receive health services, it said, adding that the ambulances will be delivered to Palestine Red Crescent officials.

Some 2,500 shelter kits with pillows and blankets were also prepared to be distributed to families who took shelter in schools because their homes were demolished in the Gaza Strip.

The Turkish Red Crescent also initiated the "Palestine wounded. Extend your hand" campaign to "heal the wounds" of Palestinians.

Established in 1868, the Turkish Red Crescent on its website says its mission is to provide "aid for needy and defenseless people in disasters and normal periods as a proactive organization, developing cooperation in society, providing safe blood and reducing vulnerability."

Turkish nongovernmental organizations (NGOs) and institutions that assist Palestine should establish a coordination group to accelerate the struggle against oppression, the head of Turkey's Presidency of Religious Affairs (Diyanet) said Thursday.

Ali Erbaş hosted an NGO Palestine Consultation Meeting and said it's everyone's duty to fight for the rights of civilians subjected to oppression, torture and massacres.

"Once again, Jerusalem and what its people went through showed us that Jerusalem will not be saved from the occupation unless the Islamic ummah (community) takes concrete and decisive steps," said Erbaş.

He said the only solution is for the ummah to come together and prevent oppression and occupation.

"The Jews who are just and conscientious and oppose persecution, are certainly not the subject of our reaction and words," he said. "It is essential that all individuals and institutions, especially nongovernmental organizations, should act in cooperation with the world public opinion about the attacks on the Palestinian people."

The meeting was attended by representatives of Turkey's Diyanet Foundation (TDV), Turkey's state-run Disaster and Emergency Management Presidency (AFAD), Kızılay and the Turkish Cooperation and Coordination Agency (TIKA), as well as representatives from several foundations, associations and NGOs.

The tensions that started in East Jerusalem during the Muslim holy month of Ramadan spread to Gaza due to Israeli assaults on worshippers in the Al-Aqsa Mosque complex and the neighborhood of Sheikh Jarrah.