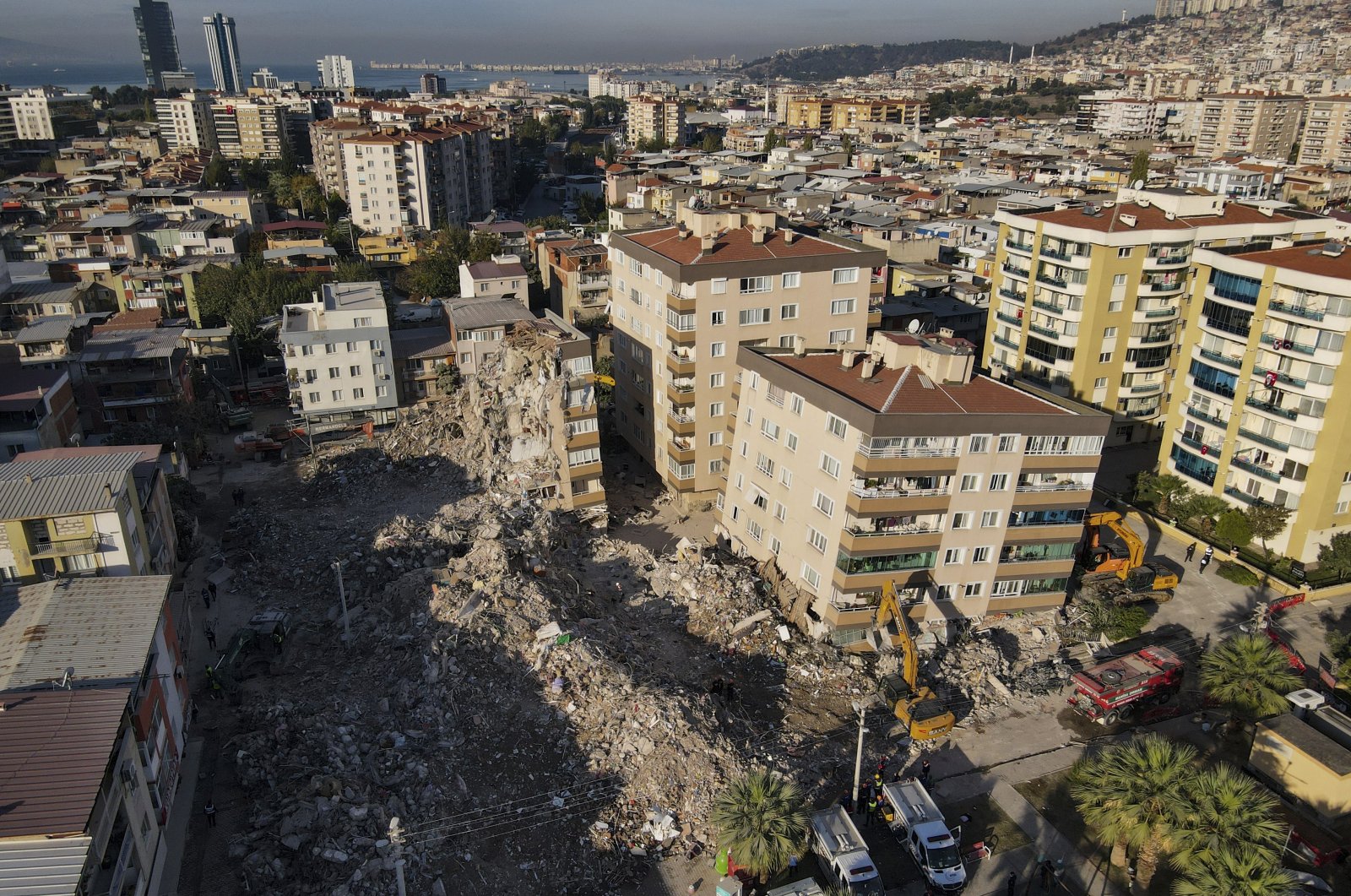 As investigations into builders and inspections of buildings that collapsed during the Izmir earthquake continue, new findings show vital construction safety breaches that led to deaths in the disaster.

In the aftermath of the 6.6-magnitude earthquake that hit the western province of Izmir last Friday, authorities are investigating the shortcomings of the buildings that collapsed in the disaster. Nine suspects were taken to court on Thursday in connection with the collapses, including building contractors and engineers in charge of inspecting the construction.

Images of apartment buildings that turned into rubble next to residences that remained intact or only suffered cracks raised questions about their state prior to the disaster, which killed 114 people.

Nine people among the detained will be interrogated for not doing their part during the construction process of the collapsed buildings. Most of the collapsed buildings were built more than two decades ago before the regulations mandating sturdier construction came into force following a deadly earthquake in 1999 in northwestern Turkey. All fatalities in the earthquake were in nine buildings in the Bayraklı district, which collapsed either entirely or partially. Police detained building contractors, owners and engineers of the buildings. A contractor and his son, who were injured in the earthquake, will be detained after they recover.

Reports by researchers after the earthquake point to “deficiencies” in the collapsed structures and risky ground conditions. Some buildings were constructed in areas that were once orchards and swamps. Investigators have interviewed 90 people so far as witnesses and plaintiffs. A report by Sabah newspaper published on Thursday highlighted faulty modifications of buildings that endangered residents' safety. At the Yılmaz Erbek apartment building where nine people died in the earthquake, seven shops on the first floor were merged and a column supporting the ceiling was cut off to expand a supermarket. In another building where 11 died, the basement floor was modified so much that it was left exposed to floods. In the Emrah apartment building, a 2005 earthquake of lower magnitude had caused cracks, but they were covered. In another apartment building, the entrance of the building was relocated long after the construction. In the Doğanlar building, a 2018 inspection had exposed safety risks. In the Rızabey building, where 34 people were killed, the collapse is blamed on poor material used in the construction.

Four experts from Gazi University in the capital Ankara visited the earthquake area on Nov. 2 and released a report on their findings Thursday. The report shows the reason that the impact of the earthquake was felt the most in Bayraklı, more than 70 kilometers (43 miles) away from the epicenter of the earthquake, was “soft” ground, buildings not resistant to quakes and poor-quality cement used in the construction. None of the buildings had a proper basement floor that would limit the damage, according to the report. The report also pointed out the region is known for fault lines that can cause tremors of such magnitude. Experts found that the high level of underground water in Bayraklı led builders to construct only “artificial” foundations for buildings. “Instead of proper swinging movement seen in buildings built on a solid foundation, the buildings suffered from instant collapse,” the report said. Yet, the primary factor in collapses is the low quality of cement, according to the experts. “Cement quality in most of the heavily damaged and collapsed buildings was of a bad grade,” the report said. Along with cement quality, building standards that would ensure endurance against a disaster were not applied during the construction. Unauthorized modification to the buildings also aggravated the damage.

Statements of Erol Kaya corroborate the findings. Kaya was a construction worker in one of the collapsed buildings at Barış, a complex of apartment buildings. Speaking to Hürriyet newspaper, Kaya, who lives near the building now, said the site where Barış and other buildings are constructed was a tangerine orchard 30 years ago. “We were aware that the building would not be safe. The ground was shaking even before we started construction. They used very poor quality material, and we warned the building contractors. They ignored us,” Kaya said. He said the building’s construction often changed hands between different subcontractors. “I knew that the first serious earthquake would raze it to the ground,” Kaya said. “These buildings were owned by members of a construction cooperative but most of them did not reside here and sold them to others. More people came to live here in recent years as the land became valuable again after the construction of high-rise buildings in nearby neighborhoods,” he said.

President Recep Tayyip Erdoğan on Thursday announced plans to build at least 1.5 million housing units in Izmir over the next five years. Speaking at a meeting of his ruling Justice and Development Party (AK Party), Erdoğan said the country currently has 1,000 container units in stock and is using those in the Aegean province to temporarily house victims of last week's quake. "We will settle our citizens in those containers" while construction starts to replace housing that was destroyed, Erdoğan said. Saying that nationwide there are at least 6.7 million housing units that need renovation, he added that the area hit by last Friday's earthquake is a wetland. "We have now reserved an area of 1.4 million square meters (15 million square feet), belonging to agriculture and forest, for building residences (for the Izmir victims)," he added.

Erdoğan stressed that all measures to ensure safety during natural disasters are currently being taken by the Ministry of Environment and Urban Planning, adding: "We want to have no issues with (building) foundations. Necessary surveys of foundations (in the area) are being done."

"We will continue to work day and night to prepare our country for natural disasters, especially earthquakes," he stressed.