Uphill battle against 'sea snot' partially pays off in Turkey 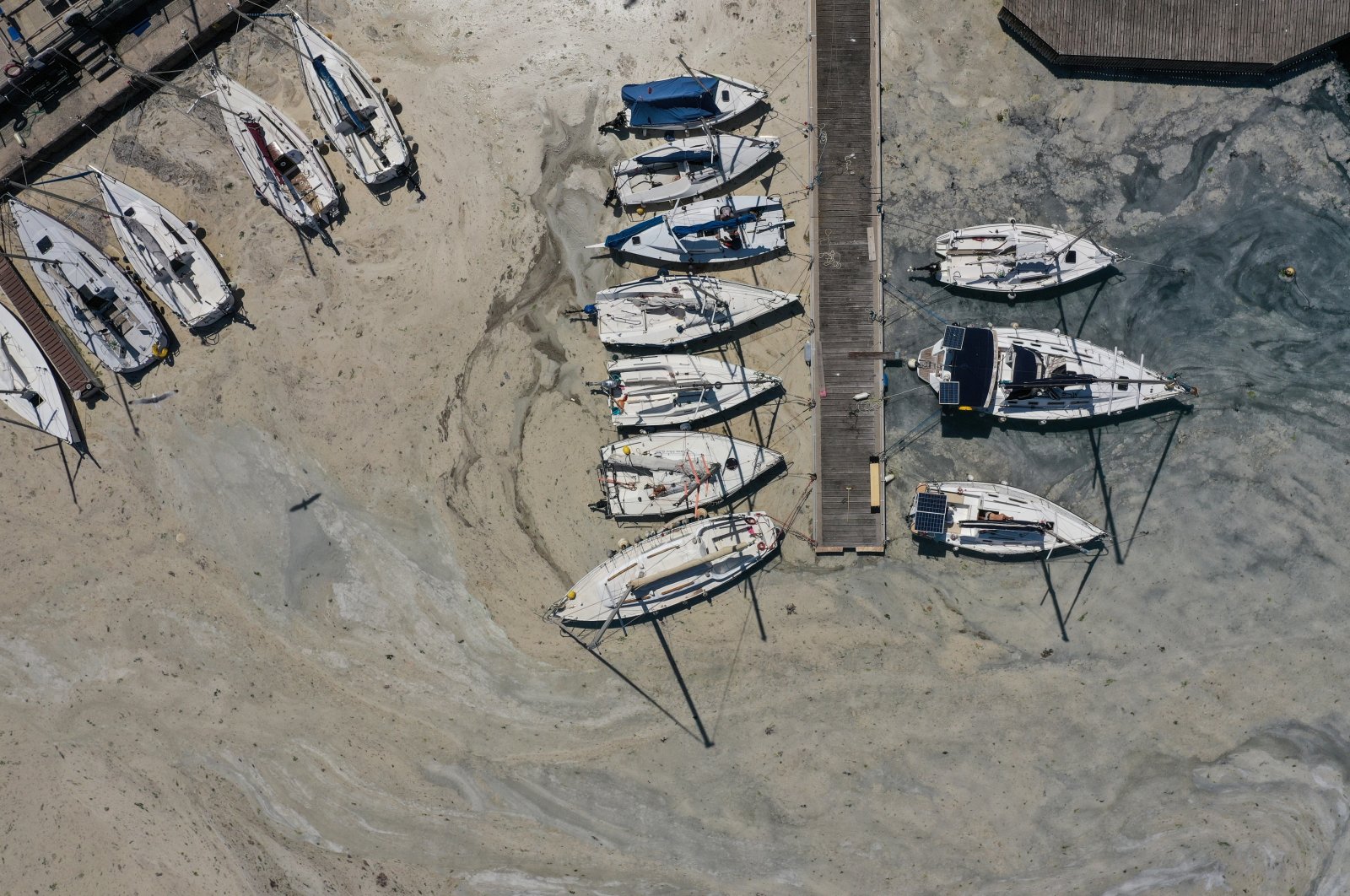 Thick layers of 'sea snot,' or marine mucilage, are still visible on the shores of the Marmara Sea, but a cleaning campaign and bacteria released by Turkish scientists to fight it has reduced the slimy threat of the microorganisms

Marine mucilage, or "sea snot" as it is better known, has proven catastrophic for Turkey's Marmara Sea. The landlocked sea has seen fish turning up dead with oxygen levels at the bottom exhausted by the masses of widespread microorganisms. After months of heightening concerns, there is hope after all, although experts are cautious regarding an "ecological disaster."

A clean-up campaign launched by the government last week collected more than 2,600 cubic meters of mucilage from the sea, while authorities fined 51 facilities for pollution, which is one of the two culprits along with climate change. Elsewhere, a team of scientists from Istanbul University managed to clean the mucilage by introducing marine bacteria within its natural environment. A harbor in Istanbul's Yenikapı, where the mucilage was widespread, was surrounded by barriers to "capture" the sea snot. A type of bacteria extracted from the sea whose metabolic properties could decompose the mucilage was then used in the area every morning and evening. After a few days, scientists discovered that the mucilage formation had completely disappeared.

In the meantime, researchers have extended their work on mucilage to the bottom of the Marmara for a better understanding of how the sea snot, which was not unprecedented in terms of existence but overwhelming this year, thrives in the sea. A research vessel operated by the Middle East Technical University (METU) will investigate the effects of sea snot at the lowest point in the Marmara at 1,210 meters (3,970 feet).

The vessel Bilim-2 (Science-2) collects data from 100 stations in the Marmara. Scientists will focus their research on the depths of the sea, especially on the formation of hydrogen sulfide.

Speaking to Anadolu Agency (AA), Mustafa Yücel, deputy director of the METU Institute of Marine Sciences, said samples taken by a water measuring device from 100 different stations, including the Istanbul and Çanakkale straits, are analyzed in the laboratory of the Bilim-2. Yücel said they have recently focused their work on the examination of the samples at the METU Institute of Marine Sciences laboratory in the Erdemli district of Mersin province and on a study to create a high-resolution digital model of the sea as part of the MARMOD Project. Underlining the importance of the digital model, Yucel said: "By looking at this model, it will be decided to what extent the reduction of the loads in the sea will affect the cleanliness. Therefore, the creation of the digital model will affect the decisions to be made for the oxygen in the Marmara.”

He said their current findings suggest that the mucilage settles 40-50 meters from the sea surface. "Thus, the signals of our devices cannot pass under the sea. We see that mucilage production continues in the sea and the agglomeration is in the sea. The mucilage rises from the bottom of the sea.”

Pointing to the importance of mucilage cleaning on the sea surface, Yücel said: "The cleanliness of the surface is of course important. The mass of material washed up near the shore must be cleaned."

"Also, it has been observed that mucilage production across the Marmara continues. We are working on what needs to be done to help the sea breathe. We think that recovery will take a long time.”

He also said that deoxygenation is a big problem for the sea, explaining that they also obtained data that the waste is organic waste. He also pointed out that they had received preliminary information from the analysis that outside containments, such as an unknown waste, were not detected in the sea.

Marine mucilage is a usual part of the natural process, but its unusual spread may cause an ecological disaster, according to Mustafa Sarı. Sarı, dean of Maritime Faculty at Bandırma Onyedi Eylül University, says the microorganism is the first step of biological production at sea and was also intensely seen in the Marmara Sea in 1992, 2007 and 2008, although not as much as this year.

Sarı said mucilage used to start in the autumn season and was visible until the end of May or the beginning of June. He stressed that "polluting the sea," "the structure of sea," and "rising seawater temperatures" are the main reasons behind the ongoing increase in mucilage in the Marmara Sea.

"The increase in nitrogen and phosphorus due to the waste left by Turkish industry and 25 million people to the Marmara Sea without being treated properly for about 40 years has caused an available environment for the proliferation of phytoplankton groups ... In the Marmara, which is a stable sea by nature, a buffer that prevents the mixing of the Black Sea water on the surface and the Mediterranean water at the bottom ... As a result of global climate change, this year the Marmara Sea became 2 degrees Celsius warmer than the average temperature of last 40 years."

He went on to say that the combination of those three triggering factors caused a large number of tulle-like structures that stretch for meters on the surface and under the sea. "If we consider the total volume of mucilage in the sea, the layer visible on the surface is not even 1/1000 of the mucilage present in the sea," he said, warning that the conditions for the formation of the mucilage must be addressed. "Otherwise we cannot cope with the consequences."

"Widespread mucilage is an ecological disaster for the marine ecosystem. The mucilage would sink to the seabed, completely engulf the underlying structure and create a new layer, and this would kill non-motile or immobile organisms such as mussels, oysters, and pen shells, especially sponges and corals," he said.

Stressing that millions of fish were killed during the expansion of mucilage in April, Sarı noted that fish larvae and eggs are also at risk due to the ongoing presence of mucilage, as its damage to the fishing sector will be seen in coming years. "The Marmara Sea is a transitional sea between the Aegean Sea and the Black Sea. Therefore, a change occurring here affects the fishery in both the Aegean Sea and the Black Sea," he added.

Mentioning the Adriatic Sea as another example of a sea that dealt with a sea snot problem in 2007 and 2008, he said the coastal countries gathered to tackle the mucilage problem and they mostly solved it with a long-term plan and program in coordination.

Ian Boyd, a biologist at Scotland's University of St. Andrews, said the ongoing mucilage issue in the Marmara Sea is a transient event that will eventually disappear.

"It occurs all over the place where sea conditions allow, although the occurrence in Turkey does seem especially extensive," noted Boyd, who was also a chief scientific adviser at the U.K. Department for Environment from 2012 to 2019.

He said mucilage is formed mainly from organic compounds, usually from marine algae, that create a surface foam. He also said it is not necessarily a result of pollution or waste as it can happen naturally in the proper conditions. "Temperature and added pollutants could exacerbate the production of foam, but it could be entirely natural," Boyd added. He stressed it should be investigated further to understand the causes of mucilage in the Marmara.

On June 7, Turkish authorities announced a 22-point Marmara Sea Action Plan to tackle a recent surge in mucilage. The plan is being jointly carried out by the Environment and Urbanization MInistry, Transportation and Infrastructure Ministry, as well as the Agriculture and Forestry Ministry. The health and interior ministries, among other bodies, nongovernmental organizations (NGOs) and coastal municipalities under the coordination of governorships, are also taking part in the plan.