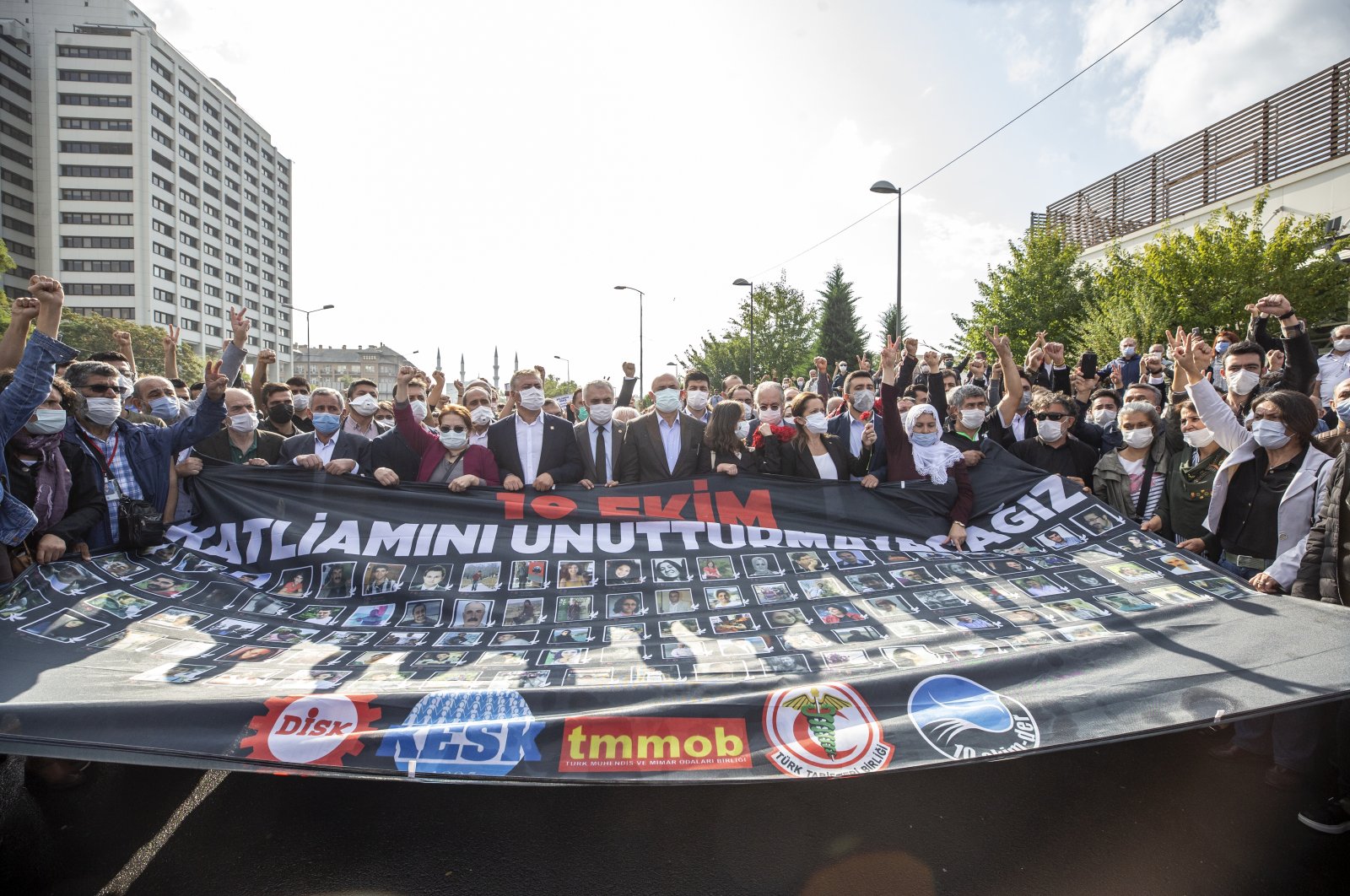 A group holds a banner showing the victims of the 2015 suicide attacks during a commemoration ceremony in the capital Ankara, on Oct. 10, 2020. (AA Photo)
by DAILY SABAH WITH AGENCIES Oct 10, 2020 9:22 pm
RECOMMENDED

The victims of Turkey's deadliest terror attack were remembered in the capital Ankara and other provinces in scaled-down commemoration events due to measures against COVID-19.

The twin suicide bombing attack carried out by Daesh terrorists targeting a rally near Ankara's main train station on Oct. 10, 2015, had claimed 103 lives and injured more than 400 people.

Main opposition Republican People's Party (CHP) chairperson Kemal Kılıçdaroğlu, accompanied by General Secretary Selin Sayek Böke, several deputies and other party officials, visited the site early in the morning and stood in silence as the names of the victims were read out. Deputies from the pro-PKK Peoples' Democratic Party (HDP) also attended the commemoration event.

A small scuffle broke out between protesters and the police at the nearby Ulus metro station as a group wanted to march to the blast site in violation of countrywide measures against mass gatherings declared to contain the pandemic.

The rally viciously targeted in 2015 was organized by several trade unions, nongovernmental organizations (NGOs) and left-leaning parties, including the CHP and the HDP, to call for a halt to the renewed escalation of fighting as the PKK terrorist group had resumed its armed attacks a couple of months earlier after a two-year hiatus. The second bomb went off as attendees of the rally, shocked and panicked by the first blast, were trying to cope and help the wounded, increasing the number of casualties.

In Aug. 2018, nine defendants were handed multiple aggravated life imprisonment and a total of 10,557 years in prison for their role in the attack. One of the defendants implicated in the investigation blew himself up when anti-terror police cornered him in a house in the southeastern city of Gaziantep in 2016, killing three police officers. The mastermind of the attack also killed himself.

Two suicide bombers were identified as Yunus Emre Alagöz, a Turkish national, and an unidentified Syrian. Alagöz was Abdurrahman Alagöz's brother, the Daesh suicide bomber who blew himself up on July 20, 2015, in the southeastern Turkish district of Suruç, killing 32 members of a far-left group affiliated with the HDP.

Suruç is located across the border from the northern Syrian town of Ain al-Arab (Kobani), where Daesh terrorists conducted a bloody siege with PKK's Syrian wing the YPG for months, entrapping hundreds of thousands of civilians in the region in the process. Many crossed into Turkey, which continues to house millions of Syrian refugees of the brutal ongoing civil war since 2011. The spillover of the fight between the two terrorist groups further destabilized the country, which has significant Kurdish and Arab populations with ties to Syria.

Fifteen days before the Suruç bombing, Daesh targeted an HDP rally in the southeastern city of Diyarbakır, killing five people and injuring dozens of others.

Amid Turkey's efforts to stop the entry of foreign fighters into Syria and dismantle Daesh's recruitment links and militant cells, the terrorist group carried out a string of suicide bombings in the country. In June 2016, 47 people were killed in bombings at Istanbul's Atatürk International Airport and an August attack targeting a street wedding in Gaziantep in the southeast killed 57 people, including 34 children. The last large-scale Daesh attack was during a New Year's Eve celebration at a nightclub in Istanbul in 2016. A lone Daesh militant gunned down 39 people weeks before he was captured.

Suicide bombings, along with constant rocket and mortar attacks targeting Turkish border towns, villages and outposts along the Syrian border, prompted Ankara to take stricter measures against Daesh, which was recognized as a terrorist group as early as 2013. Operation Euphrates Shield – first of four major Turkish incursions into Syrian territory to secure border regions, fight terrorist groups, stop the Assad regime's atrocities and facilitate the return of refugees – was launched on Aug. 24, 2016, forcing Daesh to abandon northwestern Syria while stopping YPG terrorists to fill in the power vacuum. Turkish intelligence played a key role in the death of Daesh leader Abu Bakr al-Baghdadi in October 2019 by detaining and extraditing one of his aides to Iraq, who provided U.S. authorities with critical information needed to locate him.

The terrorist group has been trying to establish reestablish itself in Turkey after it was defeated on the ground in Iraq and Syria. Turkish security forces actively conduct operations and raids, detaining scores including former foreign fighters managed infiltrate into the country. The group's so-called "country emir" was arrested in August as he was plotting attacks on Turkey's landmarks and politicians.

According to Interior Ministry figures, at least 2,000 people were arrested and 7,000 others deported in recent operations against Daesh in Turkey, while around 70,000 people have been denied entry into the country over their suspected links to the terrorist group.