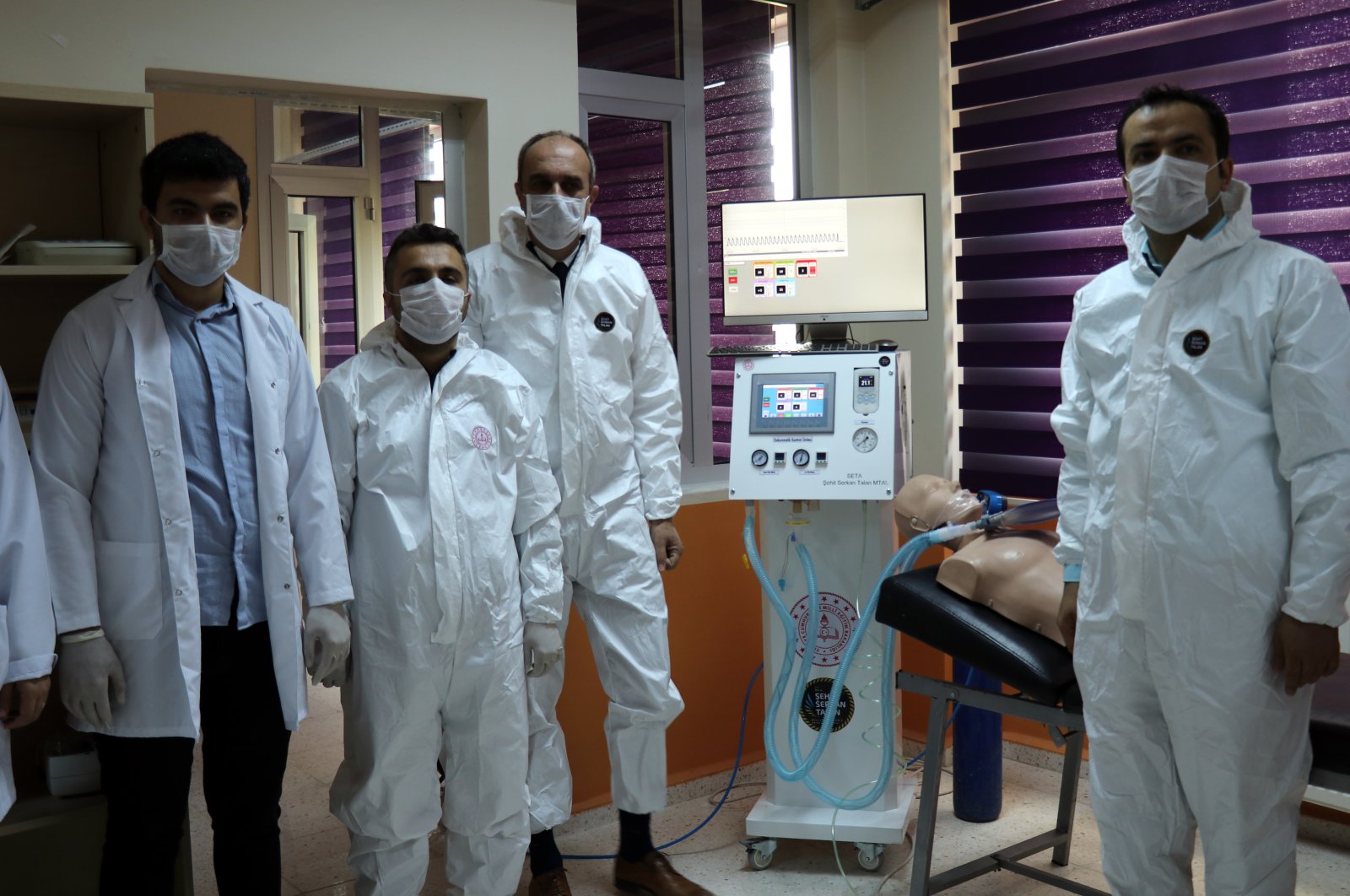 From producing millions of liters of disinfectants to crafting a ventilator, vocational schools across the country and their students became the unexpected heroes of Turkey’s fight against the coronavirus pandemic

Ever since the Health Ministry confirmed Turkey’s first coronavirus case on March 10, vocational and technical high schools have become one of the key frontiers of the nation’s fight to contain the coronavirus outbreak.

For much of the past month, the schools have been relentlessly producing vital medical supplies, be they surgical masks or disinfectants, by the millions, to help out Turkish doctors and nurses facing the deadly virus every day.

According to the Ministry of Education, vocational and technical schools have so far produced more than 4 million liters of disinfectant and crafted 4 million surgical masks. The students also supplied around half a million surgical gowns and around 100,000 face shields.

The ministry says the supplies made by the schools are being distributed to places in need in cooperation with the governors of the provinces they are located in.

But now, the students managed to outperform themselves as a high school near Turkey's southern border succeeded in producing a medical ventilator critical in treating COVID-19.

Students at Şehit Serkan Talan Vocational and Technical High School in the southern province of Hatay managed to produce a fully functional ventilator with domestic means and will begin mass production of the machines after the device is registered, Deputy Education Minister Mahmut Özer told Anadolu Agency (AA) on Thursday.

Most standard ventilators can take over all of a patient's breathing function when they can't manage on their own. When their lungs have recovered somewhat, they help them breathe on demand.

Patients are connected to the system through a tube placed into their mouth or nose which is then inserted into the windpipe through which the ventilator pumps air into the lungs.

With the COVID-19 pandemic causing a vast surge in patients struggling to breathe, the scarcity of ventilators has forced doctors everywhere to make harrowing life-or-death decisions as engineering specialists have raced to find solutions.

To avoid such heart-rending decisions being made in the country, Turkish authorities have already asked local technology and defense companies, such as Baykar, ASELSAN, Havelsan, Turkish Aerospace Industries' (TAI), BIOSYS and Arçelik to focus on mass production of ventilators since the outbreak’s beginning.

Speaking about the accomplishments of the high schools, Özer said this was not the only major success they have accomplished.

According to Özer, teachers at another vocational school in Istanbul have succeeded in creating a fully automated production machine for surgical masks.

“They have then created two more machines for masks. We are also close to finishing production machines for ventilators and N95 masks. We hope to start manufacturing by May. Our goal here is not a commercial one. While we try to increase our production capacity with these machines, we will also share our knowledge and blueprints with local firms to boost the nation’s output,” Özer said.

While high schools have done their part, universities have decided to step up to the challenge as well.

According to a new bill passed by the Turkish Parliament that will oversee changes in the country’s higher education, universities across the country will establish joint vaccine centers.

Council of Higher Education (YÖK) President Yekta Saraç said Thursday that the new bill opens up the path for universities to create joint research centers to carry out research projects on vaccines, drugs and other critical areas.

“Right now, we need to focus on research for drugs, vaccines and even seeds. All our universities are carrying their own independent research, and the public funds are not being used efficiently, resulting in thousands of research papers that amount to little in the end. Now the universities will be able to work toward a national goal while making use of resources of other well-established universities,” Saraç said.

While the efforts of high schools and the universities offered hope by painting a picture of solidarity among the population, other developments as well have led citizens to believe life may soon return to normal.

According to Health Ministry data on Wednesday, 875 coronavirus patients have recovered across Turkey in the past 24 hours, surpassing Tuesday’s record numbers.

Another figure offering a ray of hope was the number of new confirmed cases. Health Minister Fahrettin Koca said Wednesday that 4,281 people tested positive for COVID-19 in the past day as the total caseload reached 69,392.

Speaking on Turkey's effectiveness in curbing the spread of COVID-19, Koca said the rate of increase in the number of cases started falling in the fourth week since the first infection was reported. “Having a decline in the speed of increase and a decline in mortality rates are solid signs that we are on the right path in the fight against the virus, that our measures are working and that we will have tangible results,” he said.

"We have tried to identify and contact people that each of the patients diagnosed positive has been in contact with over the last three days," Koca said.

Some 4,600 teams are working to track down possible cases, including 1,600 in the worst-hit Istanbul province.

Another silver lining for the populace during the coronavirus crisis was perhaps the number of elderly survivors of COVID-19.

In the past weeks, an increasing number of senior citizens made the headlines as footage of them leaving the hospitals with applause was broadcasted from station to station.

A 96-year-old man living in the northern province of Samsun attributed his triumph over the disease that has killed so many people around his age to a natural and pastoral lifestyle.

“I ate organic, natural food at the village, paid attention to my sleep, and I have never smoked,” Kasım Akyüz said, who contracted the virus during his wife’s funeral.

Shortly after the funeral, Akyüz and his 65-year-old son were placed in quarantine as they tested positive for the virus.

“I lived in the village until I was 65. In my younger days, I always worked in the fields. I consumed natural food all the time; we made our own bread and yogurt for example. I always paid attention to my sleeping schedule to go to bed and get up early. I never smoked or drank alcohol. I led a healthy life, never even had a single surgery to this day,” Akyüz said.

His son, Yusuf, who also survived the virus despite being in the risk group too, said his father was a stress-free man.

“My father never let anything bother him. He taught us that as well. He always tries to be happy, never likes upsetting himself,” Yusuf said.

Akyüz is among the many senior citizens of Turkey who beat the odds while recoveries among the elderly have also been reported in other countries as well. In the Chinese city of Wuhan, where the virus first emerged late last year, a 103-year-old woman recovered after just six days of treatment at a hospital, and safely returned home. In Iran, a 100-year-old coronavirus patient recovered from the virus and was discharged from Alborz University of Medical Sciences’ Sarallah Hospital in northern Alborz province, Iranian Students News Agency (ISNA) reported last Thursday.

With the increasing number of recovered patients, Turkish Red Crescent saw a boost in plasma donors.

Facing an unknown enemy and emerging victorious from their fight with the virus, many survivors said they felt the urge to do something for those still battling the disease and that the Red Crescent’s convalescent plasma therapy offered a way for them to give back to the community.

Çağlar Çolak, a businessman living in the southern province of Antalya, said he wanted to donate his blood for plasma therapy after he recovered from COVID-19 and that his donation helped a 78-year-old man to survive the virus.

“I was told that the plasma gathered from blood would be used to treat a patient in the intensive care unit. Hearing that the patient recovered and tested negative for the virus after receiving the therapy made me so happy. I think it was the best news I received so far in 2020,” Çolak said.

Meanwhile, a 55-year-old professor who recovered 15 days ago said he applied to donate as well.

The Turkish Red Crescent started testing plasma therapy as a possible treatment for the virus with a donation campaign launched earlier this month.

The century-old complementary therapy has been used to fight off flu and measles outbreaks in the past. Using blood donated by patients who have recovered from COVID-19, medical experts are hoping that the serum therapy, tried more recently against SARS and Ebola, will offer effective treatment for the sick and temporary vaccine-like protection for health care workers and those with weak or suppressed immune systems.