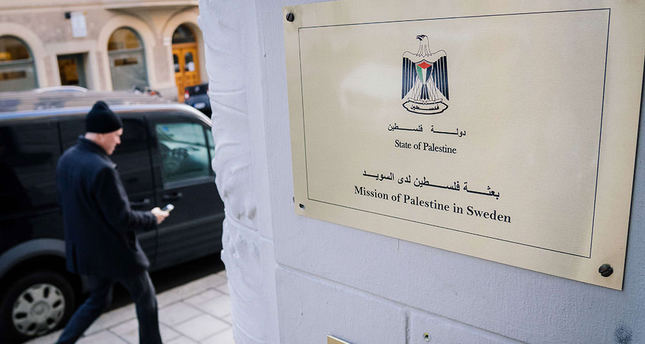 by AA Oct 31, 2014 12:00 am
Israel has summoned its ambassador from Stockholm to protest Swedish recognition of Palestine as a state.

In a Thursday statement, Foreign Minister Avigdor Lieberman said that "relations in the Middle East are a lot more complex than the self-assembly furniture of IKEA", according to The Jerusalem Post newspaper.

"The decision of the Swedish government to recognize a Palestinian state is a deplorable decision which only strengthens extremist elements and Palestinian rejectionism," he said.

Earlier Thursday, Sweden-in line with statement made one month earlier-officially recognized the State of Palestine, becoming the first E.U. member to do so.

"Today the government takes the decision to recognize the State of Palestine," Swedish Foreign Minister Margot Wallström said in a statement.

A handful of European countries-including Hungary, Poland and Slovakia-have already recognized Palestine as a state. They all did so, however, before joining the E.U.

In late 2012, Palestine was granted non-member observer status at the United Nations.

The roots of the Israel-Palestine conflict date back to 1917, when the British government, in the now-famous "Balfour Declaration," called for "the establishment in Palestine of a national home for the Jewish people."

Palestinians, for their part, continue to demand the establishment of an independent state in the Gaza Strip and West Bank, with East Jerusalem as its capital.