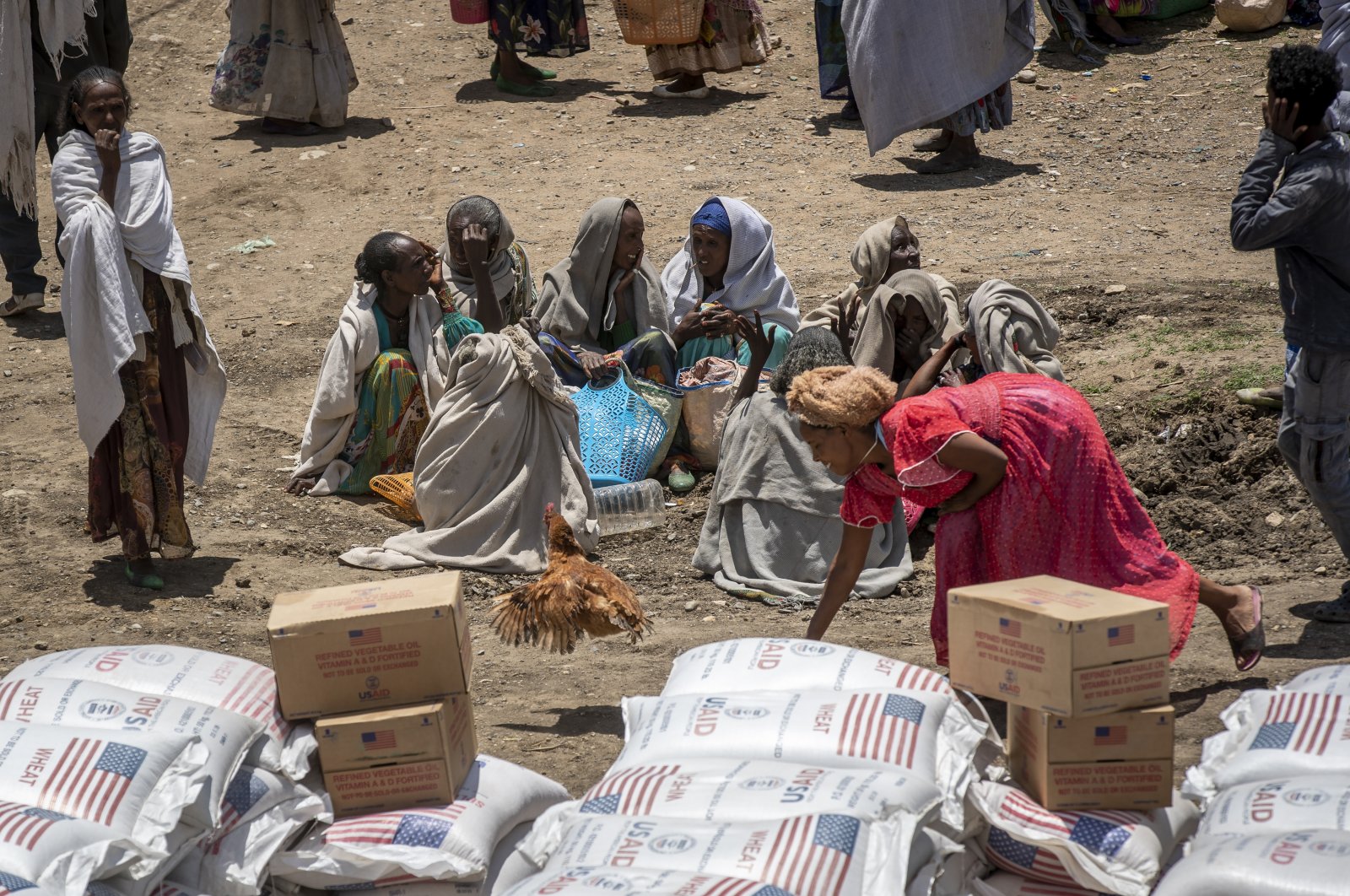 A woman chases a chicken as others sit and wait to receive food supplies such as wheat, yellow split peas and vegetable oil at a food distribution operated by the Relief Society of Tigray in the town of Agula, in the Tigray region of northern Ethiopia, May 8, 2021. (AP Photo)
by REUTERS Jun 10, 2021 2:54 pm
RECOMMENDED

Some 350,000 people in Ethiopia's conflict-torn Tigray region are in famine, an analysis by United Nations agencies and aid groups estimates, according to an internal U.N. document seen by Reuters on Wednesday.

The Ethiopian government disputes the Integrated Food Security Phase Classification (IPC) analysis, according to the notes of a meeting on the situation in Tigray of the Inter-Agency Standing Committee (IASC) – made up of the heads of at least 18 U.N. and non-U.N. organizations.

"On the risk of famine, it was noted that the unpublished IPC analysis figures were being disputed by the Ethiopian government, notably the estimated 350,000 people across Tigray believed to be in IPC 5 famine conditions," the June 7 document read.

The analysis, which diplomats said could be released publicly on Thursday, had found that millions more across Tigray required "urgent food and agriculture/livelihoods support to avert further slides towards famine."

Fighting in Tigray broke out in November between government troops and the region's former ruling party, the Tigray People's Liberation Front (TPLF).

Troops from neighboring Eritrea have also entered the conflict in support of the Ethiopian government.

The violence has killed thousands of civilians and forced more than 2 million from their homes in the mountainous region.

The committee, chaired by U.N. aid chief Mark Lowcock, includes the U.N. children's agency UNICEF, the World Food Programme, the High Commissioner for Refugees, the World Health Organization and the International Committee of the Red Cross.

Mituku Kassa, head of Ethiopia's National Disaster Prevention and Preparedness Committee, said on Thursday a declaration of famine would be incorrect. He accused the TPLF of attacking aid convoys.

"We don’t have any food shortage," he told a news conference.

More than 90% of people have been provided with aid by five operators, he said. "TPLF remnant forces ... attack the personnel, they attack the trucks with food."

Reuters could not reach the TPLF for comment and Mituku did not provide details of the alleged attacks.

The Ethiopian government's emergency task force on Tigray, Prime Minister Abiy Ahmed's office and the Foreign Ministry did not immediately respond to a request for comment.

A senior Ethiopian diplomat in New York, speaking on condition of anonymity, questioned the survey methods and accused the IPC of a lack of transparency and inadequate consultation.

Famine has been declared twice in the past decade – in Somalia in 2011 and in South Sudan in 2017. U.N. agencies, aid groups, governments and other relevant parties use the IPC to work together to determine the severity of food insecurity.

The U.N. said on Wednesday there had been reported incidents of denial of the movement of aid and the interrogation, assault and detention of humanitarian workers at military checkpoints, along with looting and confiscation of humanitarian assets and supplies by the parties to the conflict.

There had been reports of starvation among displaced people, while there was a severe need for food in northwest Tigray after the burning or looting of harvests. He did not attribute blame.

Another U.N. spokesperson declined to comment specifically on the internal IASC notes.