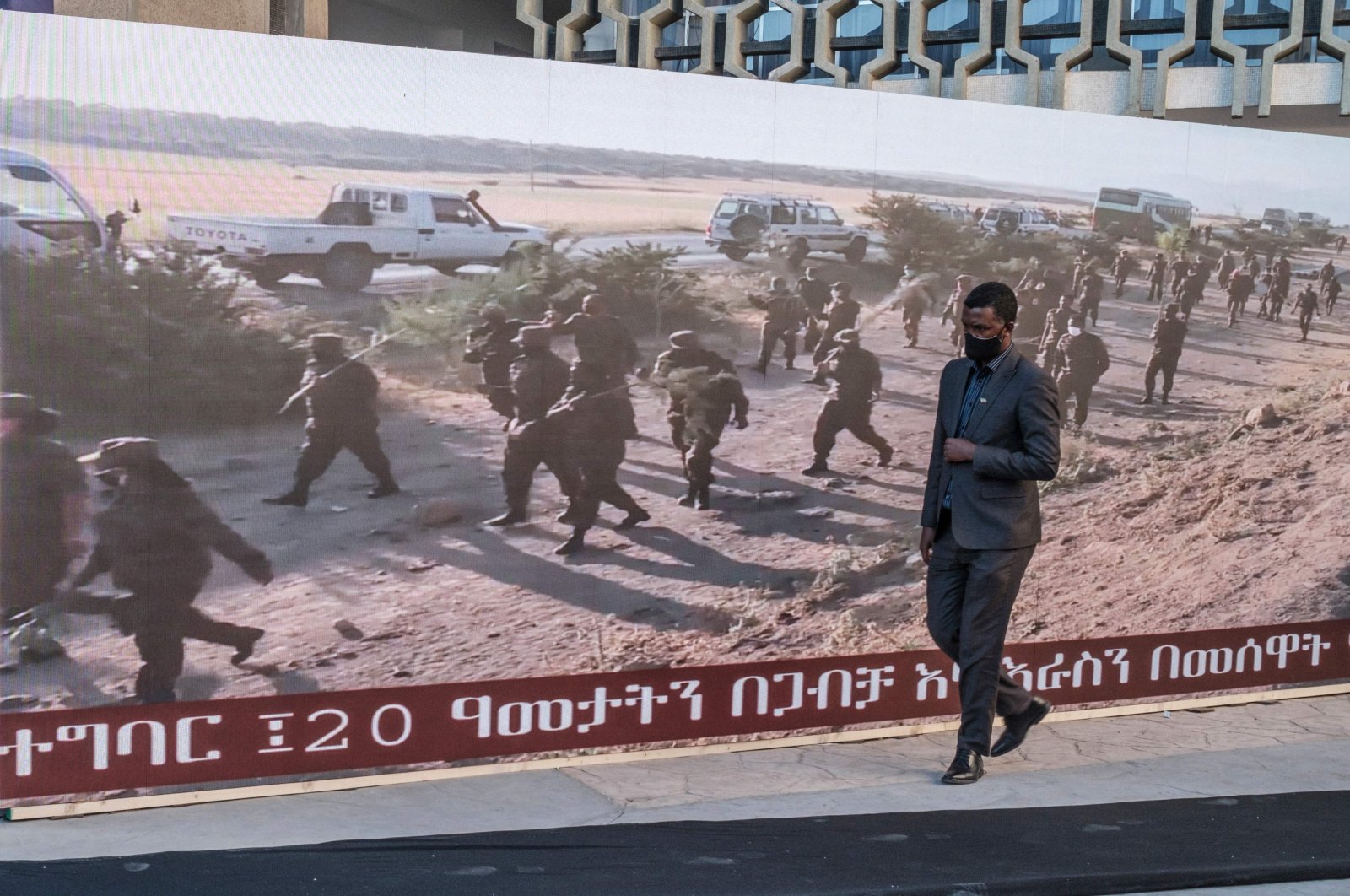 A man walks along a screen featuring soldiers during a memorial service for the victims of the Tigray conflict organized by the city administration, in Addis Ababa, Ethiopia, Nov. 3, 2021. (AFP Photo)
by Agencies Nov 05, 2021 3:48 pm
RECOMMENDED

Nine anti-government factions in Ethiopia will form an alliance on Friday, two of the groups named in an announcement seen by Reuters said, as pressure mounts on Prime Minister Abiy Ahmed with rebel forces advancing toward the capital.

The alliance, due to be signed in Washington later on Friday, includes the Oromo Liberation Army (OLA) and the Tigray People's Liberation Front (TPLF), which has been locked in a yearlong war against Prime Minister Abiy Ahmed's government.

The TPLF said Wednesday that its fighters had reached the town of Kemissie in Amhara region, 325 kilometers (200 miles) northeast of the capital, and were running "joint operations" with the OLA, which predicted Addis Ababa could fall in a matter of weeks.

The nine groups said they were forming a united front "to reverse the harmful effects of the Abiy Ahmed rule on the peoples of Ethiopia ... and in recognition of the great need to collaborate and join forces towards a safe transition in the country."

It is unclear whether the alliance, named the United Front of Ethiopian Federalist and Confederalist Forces, will affect the trajectory of the conflict, which Abiy's government has termed "an existential war."

The TPLF and the OLA, which the government officially designated as terrorist groups in May, are well-known, but the alliance's other seven members are obscure, said one diplomat following security matters.

"If they are really serious about taking up arms against the government then it's potentially a real problem for the government," the diplomat told Agence France-Presse (AFP) on the condition of anonymity.

But the diplomat cautioned: "I don't know the majority of them, I don't know how many people they have, what resources they have."

Abiy's government has dismissed rebel claims of territorial gains, saying Thursday that the TPLF was "encircled" and close to defeat, while also urging Ethiopians to unite and join the fight.

The prime minister's spokesperson, Billene Seyoum, asked about the new anti-government alliance, referred Reuters to a comment she posted on Twitter in which she defended Abiy's rule since he took office in 2018 after a wave of anti-government protests. His party was reelected in June.

"The opening up of the political space three years ago provided ample opportunity for contenders to settle their differences at the ballot box in June 2021," Seyoum said in the post. She did not refer directly to the new alliance. Spokespeople for the government and the foreign ministry did not respond to requests for comment on the alliance.

On Friday, the defense ministry called on veterans to reenlist in the armed forces "to safeguard the country from a conspiracy to disintegrate it."

Lawmakers Thursday also approved a six-month state of emergency that allows authorities to detain without a warrant anyone suspected of supporting "terrorist groups" or suspend media outlets believed to be "giving moral support directly or indirectly" to the TPLF.

Two lawyers monitoring arbitrary detentions of Tigrayans in Addis Ababa told Agence France-Presse (AFP) Wednesday they had received reports of dozens of people, and likely many more, rounded up by city police since the emergency was declared, some of whom were taken from their homes.

Amnesty also warned of an alarming rise in hate speech on social media, noting the presence of posts "inciting violence and using ethnic slurs against Tigrayans, some of which have gone unchecked."

Meta, the parent company of Facebook, said Wednesday it had deleted a post by Abiy that urged Ethiopians to "bury" the rebels for violating its policies against inciting and supporting violence.

African and Western nations are calling for an immediate cease-fire in Ethiopia after Tigrayan forces from the north said they made advances toward the capital this week.

U.S. Secretary of State Antony Blinken said in a tweet late Thursday: "The conflict in Ethiopia must come to an end. Peace negotiations should begin immediately without preconditions in pursuit of a cease-fire."

The spokespeople for the Ethiopian government and TPLF did not respond to requests for comment on Blinken's cease-fire call.

U.S. senators on Thursday introduced a new sanctions bill on parties to the conflict in Ethiopia.

"This is a regional crisis that requires a coordinated and intensive international response,” Sen. Jim Risch, a Republican from Idaho, was quoted by Reuters.

The announcement of the new alliance comes during a two-day visit to Addis Ababa by U.S. Special Envoy to the Horn of Africa Jeffrey Feltman.

On Thursday, he met African Union Commission Chairperson Moussa Faki, as well as the Ethiopian defense minister, finance minister and deputy prime minister, according to the State Department. It was not clear whether the U.S. envoy would meet Abiy. His spokesperson said she had no information on that.

The new alliance could be an attempt by the TPLF to demonstrate it has a broad base of support across the country.

The TPLF attempted to put together a similarly diverse coalition in the late 1980s, ahead of toppling longtime autocratic ruler Mengistu Hailemariam in 1991.

That coalition, the Ethiopian People's Revolutionary Democratic Front (EPRDF), went on to rule the country for nearly three decades before a prolonged protest movement brought Abiy to power in 2018.

Abiy sent troops into Tigray in November 2020 to topple the TPLF, promising a swift victory. But by late June the rebels had retaken most of Tigray and expanded into the neighboring regions of Afar and Amhara.

The escalating conflict has sparked alarm among the international community. Thousands have been killed and hundreds of thousands forced into famine-like conditions, according to the U.N.