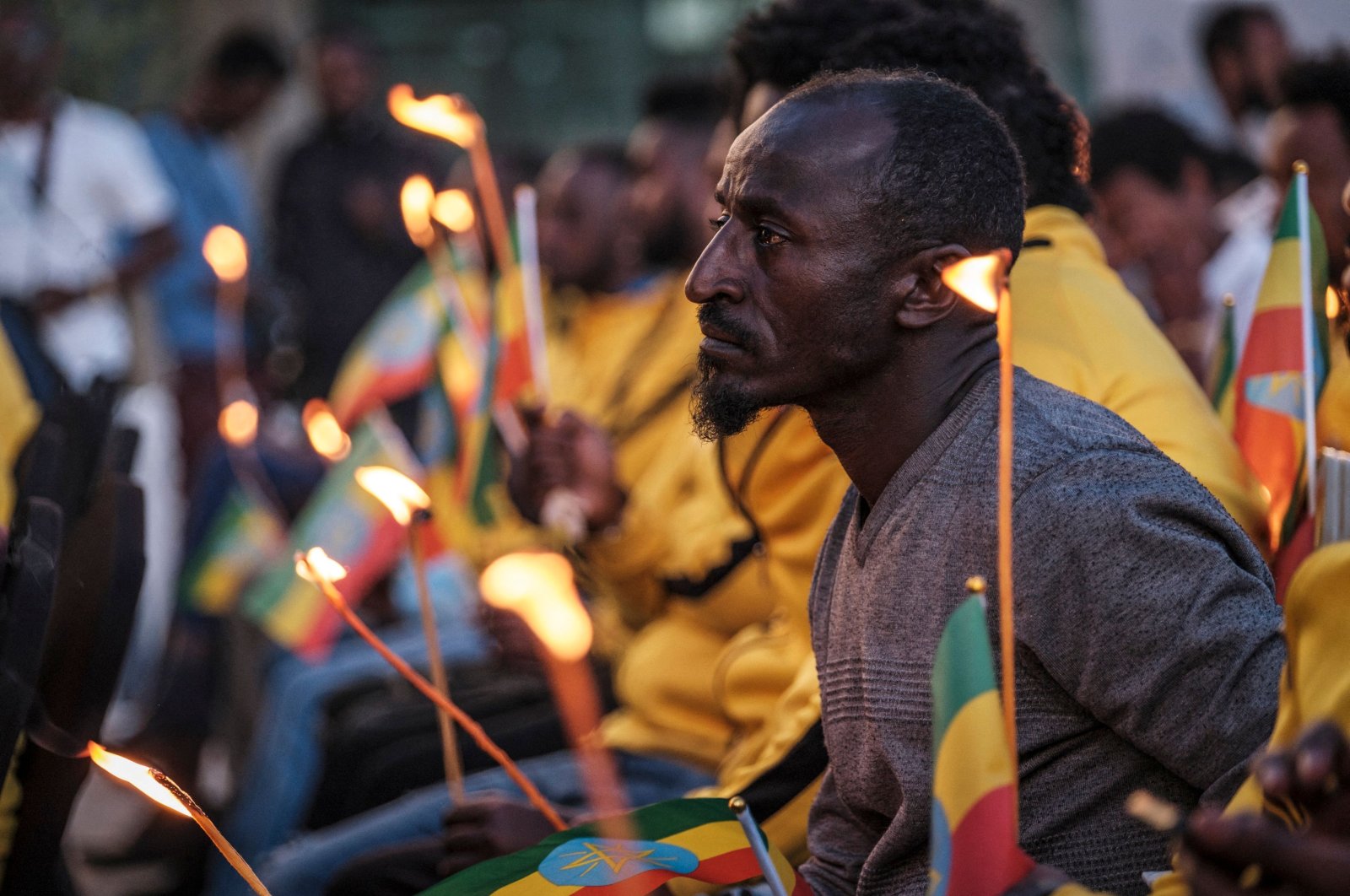 A man holds a candle during a memorial service for the victims of the Tigray conflict organized by the city administration, in Addis Ababa, Ethiopia, Nov. 3, 2021. (AFP Photo)
by ASSOCIATED PRESS Nov 04, 2021 10:41 am
RECOMMENDED

Urgent new efforts to calm Ethiopia’s escalating war are unfolding Thursday as a U.S. special envoy visits and the president of neighboring Kenya calls for an immediate cease-fire while the country marks a year of conflict.

The lack of dialogue "has been particularly disturbing,” Kenyan President Uhuru Kenyatta said in a statement, as the war that has killed thousands of people and displaced millions since November 2020 threatens to engulf the capital, Addis Ababa. Rival Tigray forces seized key cities in recent days and linked up with another armed group, leading the government of Africa’s second most populous country to declare a national state of emergency.

The spokesperson for Prime Minister Abiy Ahmed, Billene Seyoum, did not immediately respond Thursday when asked whether he would meet with U.S. special envoy Jeffrey Feltman, who this week insisted that "there are many, many ways to initiate discreet talks.”

United Nations Secretary-General Antonio Guterres on Wednesday said he had spoken with Abiy "to offer my good offices to create the conditions for a dialogue so the fighting stops.”

But so far, efforts for such discussions have failed. Last week a congressional aide told The Associated Press (AP) that "there have been talks of talks with officials, but when it gets to the Abiy level and the senior (Tigray forces) level, the demands are wide, and Abiy doesn’t want to talk.”

Instead, the prime minister has again called citizens to rise up and "bury” the Tigray People's Liberation Front (TPLF) who long dominated the national government before he came to power. On Wednesday, Facebook said it had removed a post by Abiy with that language, saying it violated policies against inciting violence. It was a rare action against a head of state or government.

Kenya’s foreign ministry separately said that statements inciting ordinary citizens into the conflict "must be shunned.” Kenya also has increased security along its borders amid fears of a wave of Ethiopians fleeing the war as one of the world's worst humanitarian crises spreads.

Tigray forces spokesperson Getachew Reda in a tweet late Wednesday claimed they had "joined hands” with another armed group, the Oromo Liberation Army (OLA), to seize the city of Kemisse even closer to the capital.

"Joint operations will continue in the days and weeks ahead,” he said. The claim could not immediately be verified.

All sides in the war have committed abuses, a joint U.N. human rights investigation announced Wednesday, while millions of people in the government-blockaded Tigray region are no longer able to receive humanitarian aid.

With the new state of emergency's sweeping powers of detention, ethnic Tigrayans in the capital told AP they were hiding in their homes in fear as authorities carried out house-to-house searches and stopped people on the streets to check identity cards, which everyone must now carry.

"Our only hope now is the (Tigray forces),” said one young woman, Rahel, whose husband was detained on Tuesday while going to work as a merchant but has not been charged. "They might not save us, to be honest. I've already given up on my life, but if our families can be saved, I think that's enough.”

Another Tigrayan in the capital, Yared, said his brother, a businessperson, was detained on Monday, and when he went to the police station to visit him he saw dozens of other Tigrayans.

"It’s crazy, my friends in Addis, non-Tigrayans, are calling me and telling me not to leave the house,” Yared said, adding that police came to his house on Wednesday, the latest of several such visits since the war began.

"They go through your phone and if you have some material about the Tigray war that would be suggesting supporting the war, they would just detain you,” he said. "The past four days have been the worst by far, the scope at which they're detaining people, it’s just terrorizing. We don’t feel safe in our homes anymore.”