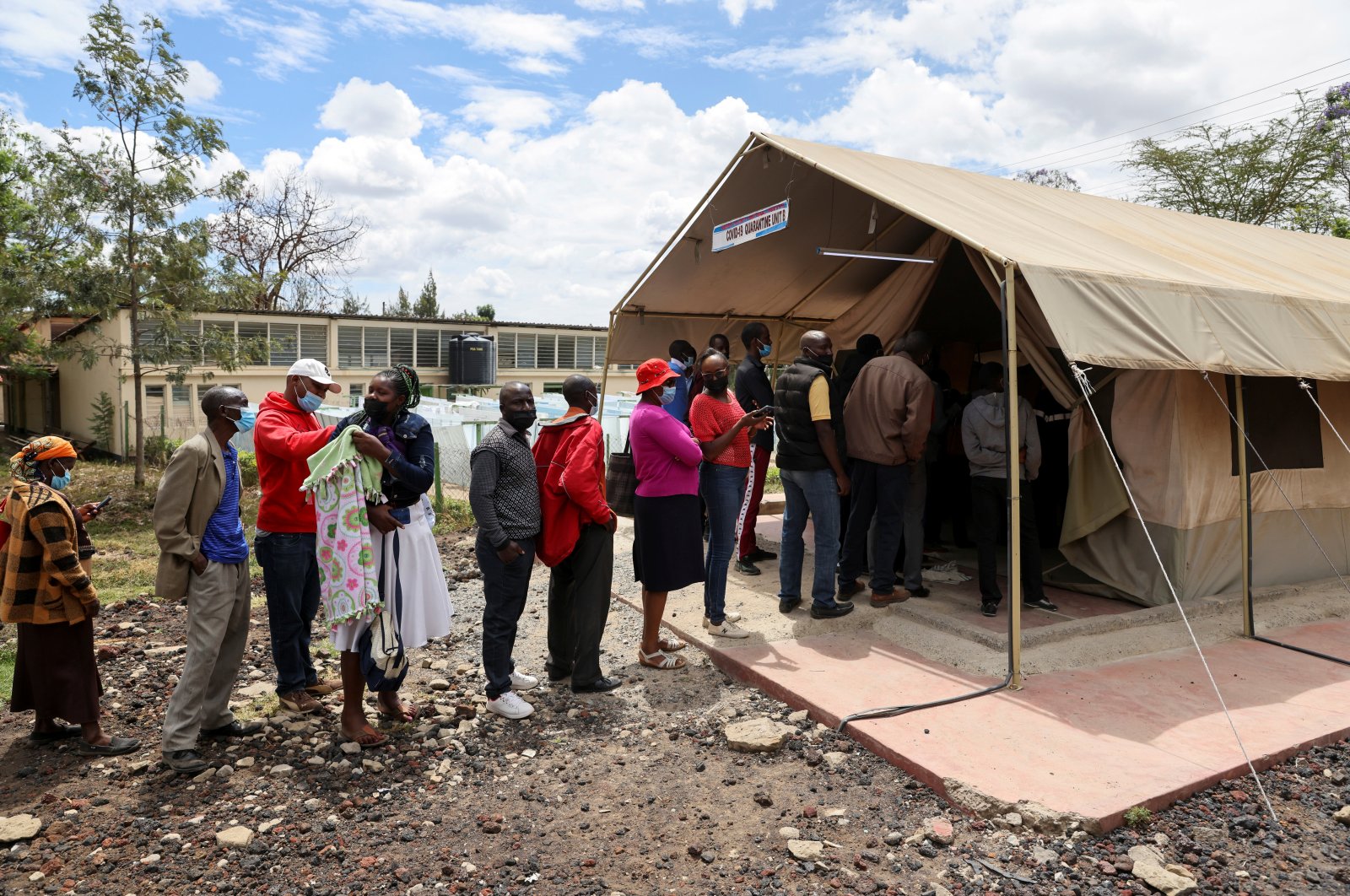 Vaccines are arriving in African countries, yet a lack of funds, staff and community outreach have slowed down the campaigns that are expected to also be impacted by the new omicron variant

The long wait for coronavirus shots in African countries is finally coming to an end, and vaccine deliveries are now accelerating. Yet, not all countries are prepared to administer the jabs at a rate that could put them ahead of the virus's spread.

When a group arrived at the Sekenani health clinic in rural Kenya for their COVID-19 vaccines recently, staff told them there were no doses left and that they should come back soon.

For some, it meant a long wasted journey on foot and a day away from their cattle herds.

Yet Narok county, where the clinic is located, was not short of vaccines; nearly 14,000 doses were sitting in a fridge in the nearest town, 115 kilometers (71 miles) away. A mix-up with county officials meant Sekenani did not get enough, two health workers said.

"We had to say sorry. It's not a good feeling when somebody comes and they want the vaccine, and we don't have it," clinician Mike Nalakiti, 27, told Reuters.

The small failure in a village 270 kilometers southwest of the capital Nairobi is an illustration of the challenges African nations now face as they battle COVID-19: even though vaccine supplies are finally ramping up, getting needles into arms is proving the hard part.

Only 102 million people, or 7.5% of the continent's population, are fully vaccinated, according to the World Health Organization (WHO), which warned vaccine inequity will prolong the pandemic.

African governments have been crying out for higher vaccine deliveries this year, but production constraints and hoarding by richer countries severely limited supplies until recently.

Shortages of funds, medical staff and equipment, as well as vaccine hesitancy, were already hobbling inoculation campaigns in some parts of Africa. The anticipated surge, comprising of millions of jabs in the coming weeks, could expose those weaknesses further, experts warn.

About 40% of vaccines that have arrived so far on the continent have not been used, according to data from the Tony Blair Institute for Global Change, a policy think-tank.

The rate of vaccine use will have to rise fourfold to keep up with expected supply in coming months, the institute says.

"We are all, like you, very concerned that countries are not picking up the vaccines. The uptake is not as we would have loved to see," head of the Africa Centres for Disease Control and Prevention John Nkengasong said.

Vaccination rates vary widely across Africa, a continent of well over a billion people, and some health systems in relatively small nations and in North Africa are having more success.

Cape Verde, an archipelago nation off West Africa with a population of about 600,000, has vaccinated nearly 65% of adults, rivaling some European countries.

In the Democratic Republic of Congo, a restive country in Central Africa with a population of nearly 90 million, the number is 0.1%.

In some ways, Kenya is doing relatively well. East Africa's largest economy has received nearly 5 million doses in the past two weeks after months of slow supplies.

On Dec. 1, it vaccinated a record 110,000 people and aims to maintain that rate for the next 30 days, said Willis Akhwale, head of the government's COVID-19 vaccine task force. That would bring the total vaccinated to 10 million out of a population of 47 million, he said.

Yet in the rural Sekenani clinic at the edge of the famous Maasai Mara Game Reserve, where elephants and lions roam, challenges abound.

The clinic started offering COVID-19 vaccinations four weeks ago. It keeps running out of doses and has only one reliable fridge, which is also used for routine immunisations, said clinical officer Gerald Yiaile.

Staff need motorbikes to take vaccines to the community, semi-nomadic livestock herders from the Maasai ethnic group who struggle to afford transport for health care, he said.

He applied to local authorities for funds for mobile vaccination and has not heard back.

"We have been forced to ask the community to come to us instead of us going to them," Yiaile said.

COVAX deliveries were then disrupted after COVAX's major supplier India halted vaccine exports. The pause gave countries time to improve vaccination rollout without being inundated. They did so to differing degrees.

The GAVI vaccine alliance, a co-leader of COVAX, initially did not prioritize investing in the ultra-cold chain equipment needed for mRNA shots like Pfizer's because it expected the bulk of doses to be the cheaper and easier-to-administer AstraZeneca shots produced in India, Reuters reported in September.

As vaccine deliveries to Africa soar, absorption of large volumes is expected to represent a major challenge for many poor countries, particularly because a substantial volume will be from Pfizer, GAVI said in internal documents prepared for its board meeting last week and seen by Reuters.

Even Kenya, which has the ultra-cold chain capacity to store 3 million Pfizer doses, is worried its cold chain will get constrained by the influx, threatening its routine immunization program, Akhwale said.

Cameroon in Central Africa had 244 vaccination centers at the start of its vaccine rollout in April, and now has 1,000, said Njoh Andreas Ateke, deputy head of the immunization program.

But health workers and officials say that power outages and lack of staff have compromised vaccines.

Mali, one of Africa's largest and poorest countries, has two refrigerated trucks to carry vaccines long distances. Some health workers fled their posts in the north because of insecurity caused by an extremist insurgency, said UNICEF's health program manager in Mali, Abdoul Gadiry Fadiga.

The country expects to receive about 3.5 million doses between now and the end of March, more than double the number it has received since inoculations began, Fadiga said.

Mali has enough cold chain capacity to deal with the initial rush of doses until March, Fadiga added, but it still needs 288 fridges and freezers for its full rollout, only 10 freezers of which had arrived.

Funds have been slow to materialise. The World Bank has approved $9.8 billion for emergency health responses, including for vaccine deployment, in developing countries globally, but so far only $4.4 billion has been disbursed.

Even when help arrives it can backfire. Donors have sometimes sent African nations vaccine batches nearing expiration, in some cases rendering them unusable.

Countries desperate for vaccines, including South Sudan and Congo, had to send some back because they could not distribute them in time. Namibia warned last month it may have to destroy thousands of out-of-date doses.

South Africa asked Johnson & Johnson and Pfizer to delay delivery of vaccines because it had too much stock.

A key difficulty in administering vaccines is community skepticism, sometimes driven by religious belief and mistrust of Western drug companies and their own governments. Insufficient education about COVID-19 vaccines enables rumors to spread.

That can be the result of local staff and budget shortages, health workers from across the continent told Reuters.

Ethiopia is worried that vaccines might expire before they are used due to low demand and is trying to overcome vaccine hesitancy through outreach to communities via local religious and civil society groups, said Muluken Yohannes, a senior adviser to Ethiopia's Health Ministry.

"Currently, developed countries ... have satisfied their vaccine needs. As a result, they are pushing leftover vaccines ... to developing countries. However, the golden period to absorb these vaccines has already passed," he said.

Kenya has ramped up its vaccine rollout with social media and television and radio ads promoting vaccines. Posts on the Health Ministry's Twitter feed urge pregnant and breastfeeding mothers to get vaccinated.

Not everyone gets the message. Nicky Theron, 20, who works at a clothing shop in the town of Talek, is five months pregnant and scared of the jab. She doesn't follow any government Twitter accounts.

"I have never heard of anybody who is pregnant receiving the vaccine," she said.

Some feel they could be persuaded if someone came to explain in person.

Julius Tuyioto, who herds livestock on arid plains in southern Kenya, hears the government warn of the dangers of COVID-19 on the radio. But the disease hasn't hit his community; he says it doesn't feel real.

"There is no civic education on why we should be vaccinated. No one is telling us," Tuyioto told Reuters outside his mud brick home in Narok County, to the chime of goat bells.

Last month, the government sent vaccines by motorbike to the nearest primary school, 5 kilometers away, he said. But he did not hear about it until the third and final day, when it was too late for him to go.