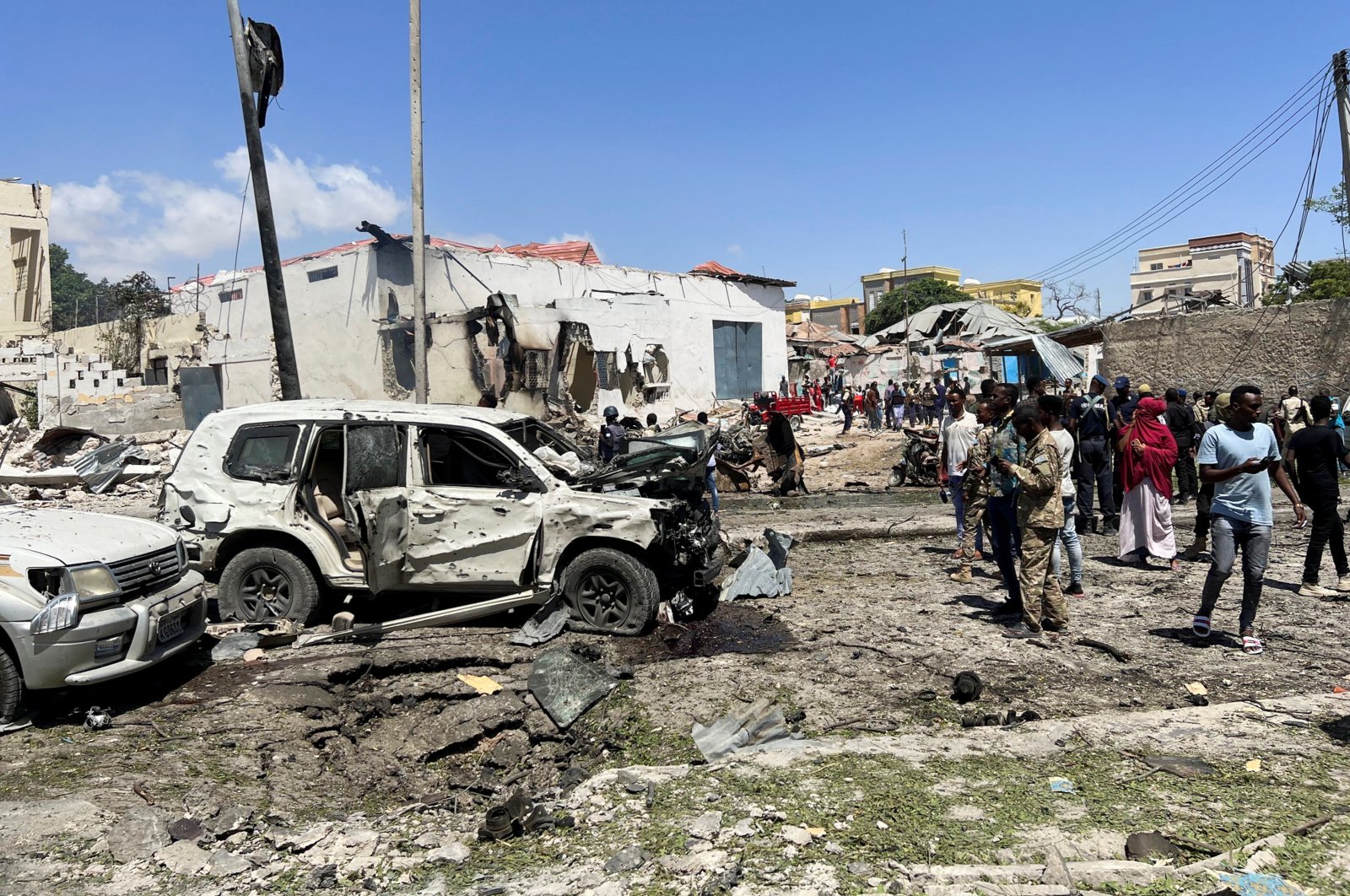 Civilians look at the wrecked vehicles at the scene of an explosion in the Hamarweyne district of Mogadishu, Somalia, Jan. 12, 2022. (Reuters Photo)
by Agencies Jan 12, 2022 3:49 pm
RECOMMENDED

A suicide bombing attack using an explosive-laden car left at least 10 people dead in the Somalian capital Mogadishu on Wednesday, with al-Shabab terrorists claiming the attack.

The attack in Mogadishu has been claimed by al-Shabab, an al-Qaida-linked terrorist group that often carries out deadly attacks in the Horn of Africa country. The terrorist group said in a brief statement that it was targeting "foreign officers."

"We know that at least 10 people were killed, including five soldiers in the bomb explosion" along with several injuries, Ali Yare Ali, deputy governor for security and politics of the Banadir regional administration, told journalists.

He added that an investigation into the attack is underway.

Abdifatah Hassan, a police officer in the capital Mogadishu, told Anadolu Agency (AA) that the attack took place near one of the entrances of the capital’s Aden Adde International Airport, adding to earlier reports that put it along 21 October Road in the neighborhood of Waberi.

He said the attack had devastated some nearby buildings.

Witnesses said a multi-vehicle private security convoy escorting foreigners was passing by the area in southern Mogadishu when the explosion hit.

"I saw some of the passengers injured and being carried after the blast," witness Osman Hassan told Agence France-Presse (AFP).

Another witness, Hassan Nur, said: "The blast was so huge that it has destroyed most of the buildings nearby the road and vehicles passing by the area.

"I saw several dead and wounded people strewn in the road."

The attack took place only days after Somali leaders had agreed on a new timetable for long-delayed elections in the troubled Horn of Africa country.

Somalia has been in the grip of a political crisis since February last year after it failed to reach an agreement on holding new elections.

Under a deal announced late Sunday after talks between Roble and state leaders, parliamentary polls that should have wrapped up last year are now due to be concluded by Feb. 25.

The agreement appeared to ease the standoff between Roble and Farmajo, who said in a statement late Monday that he applauded the "positive result" on the election timetable.

The crisis had set alarm bells ringing in the international community, which fears it threatens the stability of a fragile country still battling a violent insurgency by al-Shabab.

The al-Qaida-linked group have been waging a deadly campaign against the weak central government since 2007 but were driven out of Mogadishu in 2011 after an offensive by an African Union force.

However, the militants retain control of vast rural areas of Somalia, from which they frequently launch deadly attacks in the capital and elsewhere against civilian, military and government targets.

Al-Shabab was also behind a 2017 truck bomb attack in Mogadishu that took some 600 lives, the worst terrorist attack in the country’s history.