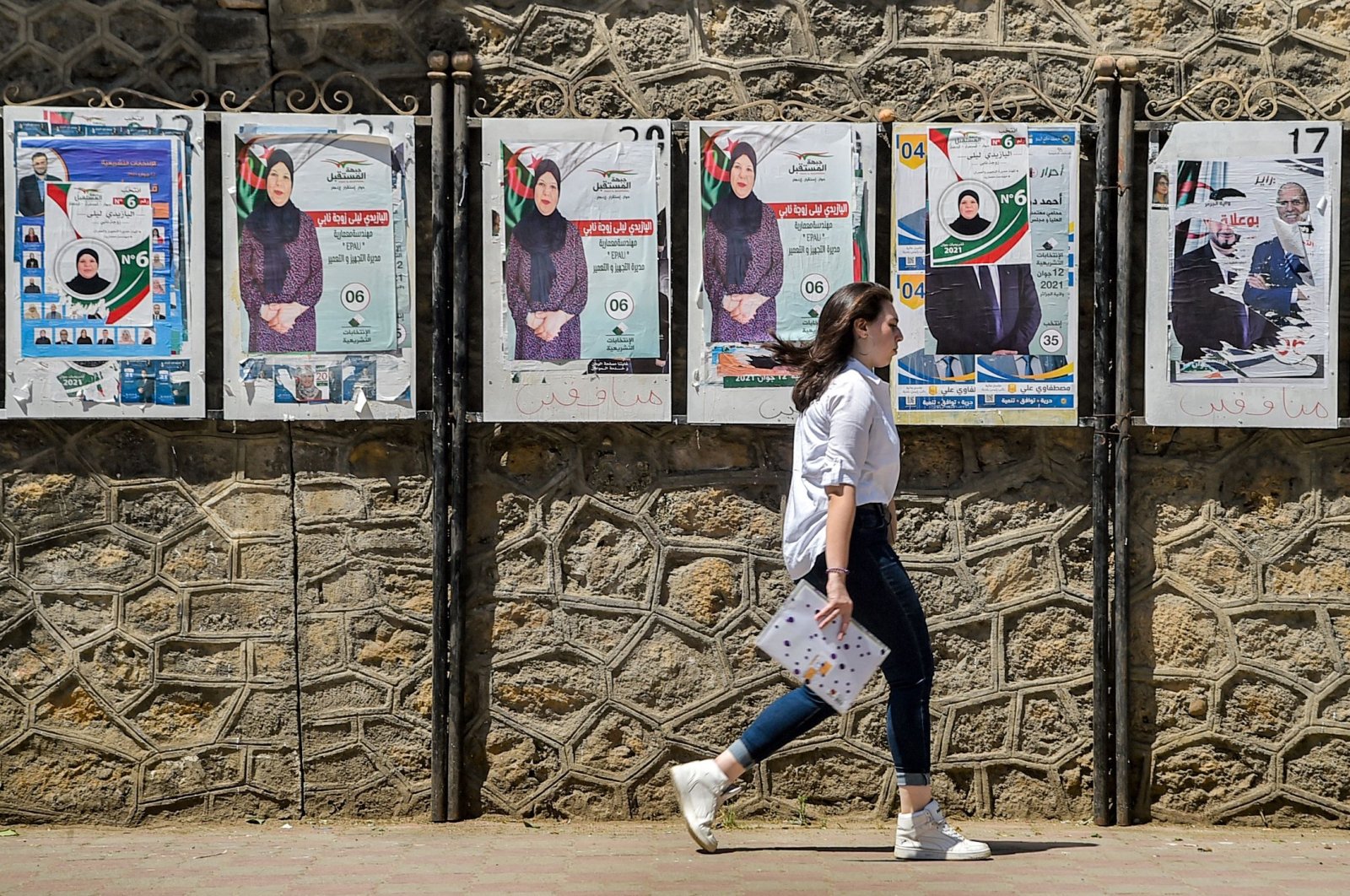 A woman walks past a fence showing electoral posters of a candidate of the "Future Front" political party in the Algerian capital, Algiers, June 11, 2021. (AFP Photo)
by ASSOCIATED PRESS Jun 12, 2021 11:17 am
RECOMMENDED

Algeria heads to polls on Saturday for a new parliament that is meant to satisfy demands of pro-democracy protesters and turn a new leaf for the troubled, albeit gas-rich, country. Not everyone is excited about the election, however, as many activists are planning boycotts.

Authorities have tightened the screws on the Hirak protest movement in recent weeks, and police arrested a politician and journalist who are prominent opposition figures in the run-up to the voting.

The early election is supposed to exemplify President Abdelmadjid Tebboune’s "new Algeria,” with an emphasis on young candidates and those outside the political elite. A huge number of candidates – more than 20,000 – are running for the 407-seat legislature, more than half as independents and the rest on party lists.

It’s the first legislative election since former President Abdelaziz Bouteflika was forced from office in 2019 after 20 years in power amid protests over corruption, joblessness and repression.

But the threat of boycott, worries about the coronavirus and general frustration with the political system mean Saturday's turnout may be low.

Women make up half of the candidates for the first time, among efforts to make a fresh start. But women have been largely invisible from the campaign – and in some cases their faces were blurred or concealed in campaign posters, according to newspaper El Watan.

Candidates had just 20 days to campaign, and Algerian media said real debate on major issues of concern, like unemployment, was mostly absent.

"With such a slew of candidates, the calculation of power is simple: to elect a patchwork assembly, without a majority, which will allow the president to create his own parliamentary majority with which he will govern,” said political scientist Rachid Grime.

A new election authority was formed to run the vote, and its chief said results may take up to 10 days to tally given the large number of candidates and the new system.

Many candidates could not afford campaign posters. Independent candidates like Djamel Maafa, a former TV producer, used social networks to spread his message for lack of access to the funds and logistical structure of big parties.

Parties supporting the Hirak movement called for a boycott because they want a more fundamental political transition.

"Elections in Algeria have always proved that they are not the solution. The solution lies in democratic transition, it also lies in a dialogue around a table in order to solve the crisis,” said activist Sofiane Haddadji.