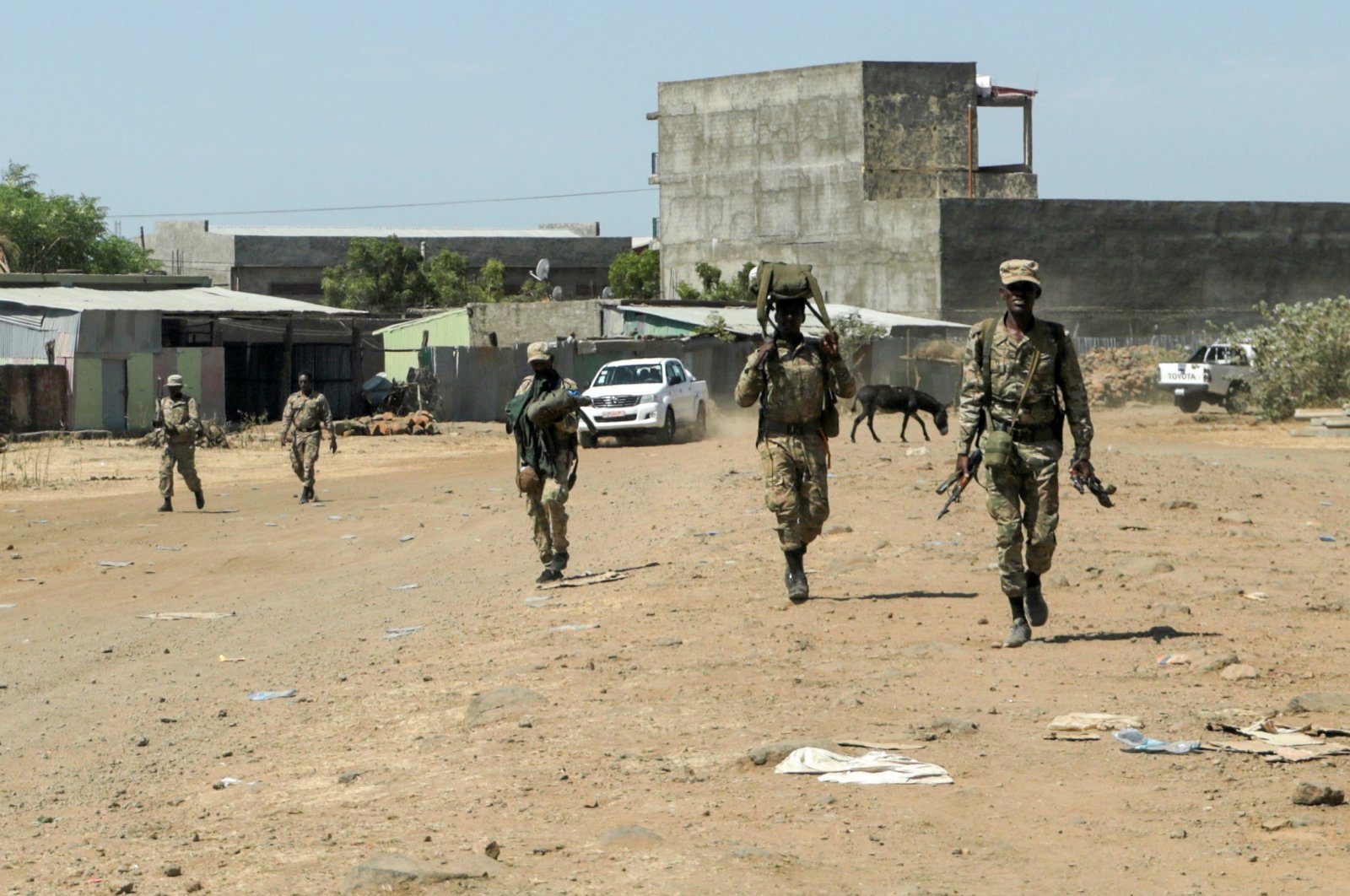 Members of the Amhara Special Force return to the Dansha Mechanized fifth division Military base after fighting against the Tigray People's Liberation Front (TPLF), in Danasha, Amhara region near a border with Tigray, Ethiopia, Nov. 9, 2020. (Reuters Photo)
by REUTERS Nov 28, 2020 2:50 pm
RECOMMENDED

Ethiopian government forces began an offensive to capture the regional capital Mekelle in the rebellious northern Tigray region on Saturday, said a diplomat in direct contact with residents, and the leader of Tigrayan forces.

Debretsion Gebremichael, leader of the Tigray People's Liberation Front (TPLF), told Reuters in a text message Mekelle was under "heavy bombardment." The Ethiopian military is using artillery in the assault, he said in a subsequent text message.

The diplomat said explosions were reported in the north of the city, in the Hamidai area. A second diplomat also said the attack had begun.

Billene Seyoum, a spokesperson for the prime minister's office, said: "The Ethiopian National Defense Forces do not have a mission to bombard its own city and people. Mekelle remains one of Ethiopia's key cities and the efforts to bring to justice the criminal clique will not entail discriminatory 'bombardment' as alluded by TPLF and their propagandists."

She added, "The safety of Ethiopians in Mekelle and Tigray region continues as priority for the federal government."

Claims from all sides are difficult to verify since phone and internet links to the region have been down and access has been tightly controlled since fighting began three weeks ago between forces of the government and the TPLF.

The government gave the TPLF an ultimatum last Sunday to lay down arms or face an assault on Mekelle, a city of 500,000 people. The ultimatum expired on Wednesday.

Abiy told African peace envoys on Friday that his government will protect civilians in Tigray. But Abiy has said he regards the conflict as an internal matter and his government has so far rebuffed attempts at mediation.

The Ethiopian military has been fighting forces in the northern region of Tigray, which borders the nations of Eritrea and Sudan, since Nov. 4. Abiy accuses Tigrayan leaders of starting the war by attacking federal troops at a base in Tigray. The TPLF says the attack was a preemptive strike.

Thousands of people are believed to have died and around 43,000 refugees have fled to Sudan.

Debretsion also accused the Eritrean military of crossing the border and raiding refugee camps in Tigray to capture refugees who have fled Eritrea in the past.

Reuters was not immediately able to get comments from the Eritrean government, which has not responded to calls from Reuters for more than two weeks.

The TPLF and Eritrea are archenemies: The TPLF was in charge in Addis Ababa when Ethiopia and Eritrea fought a war from 1998-2000. But Eritrea and Abiy have warm relations. The Ethiopian government has denied TPLF accusations that Eritrean troops are operating on Ethiopian soil.

Eritrea is one of the world's most repressive nations. It has never had elections, and no independent media has operated there for two decades. Upon turning 18, Eritrean men and women must enter compulsory service to the state for an indefinite amount of time. Around 10% of the population has fled.

On Friday evening in Eritrea, "a loud noise, possibly an explosion" was heard in the capital Asmara, the U.S. Embassy there said in a statement early on Saturday. TPLF rockets hit Eritrea on Nov. 14.

On Friday, a letter was sent to embassies in Addis Ababa warning defense attaches that they risked expulsion if they were in contact with unnamed enemies of Ethiopia.

"Some military attaches are working with those who endangered the security of the country, identified in blacklist and sought by attorney of the court,” said the letter. The letter was stamped by Brigadier-General Boultie Tadesse of the Defence Foreign Relations Directorate, on the copy of shown to Reuters.

"We will expel those who do not refrain from their actions who are in contact with those extremist group."

A military spokesperson and the head of the government’s Tigray task force did not respond to requests for comment.

Billene, the prime minister's spokesperson, said she could not address questions about the letter, including whether it was referring to the TPLF, without seeing the original document.

Tigrayans, who make up about 6% of Ethiopia's 115 million population, dominated the government until Abiy took power two years ago.

Abiy pledged to unite Ethiopians and introduce freedoms after years of state repression that filled jails with tens of thousands of political prisoners. His government also put senior Tigrayan officials on trial for crimes such as corruption, torture and murder. The Tigrayan region saw those trials as discrimination.