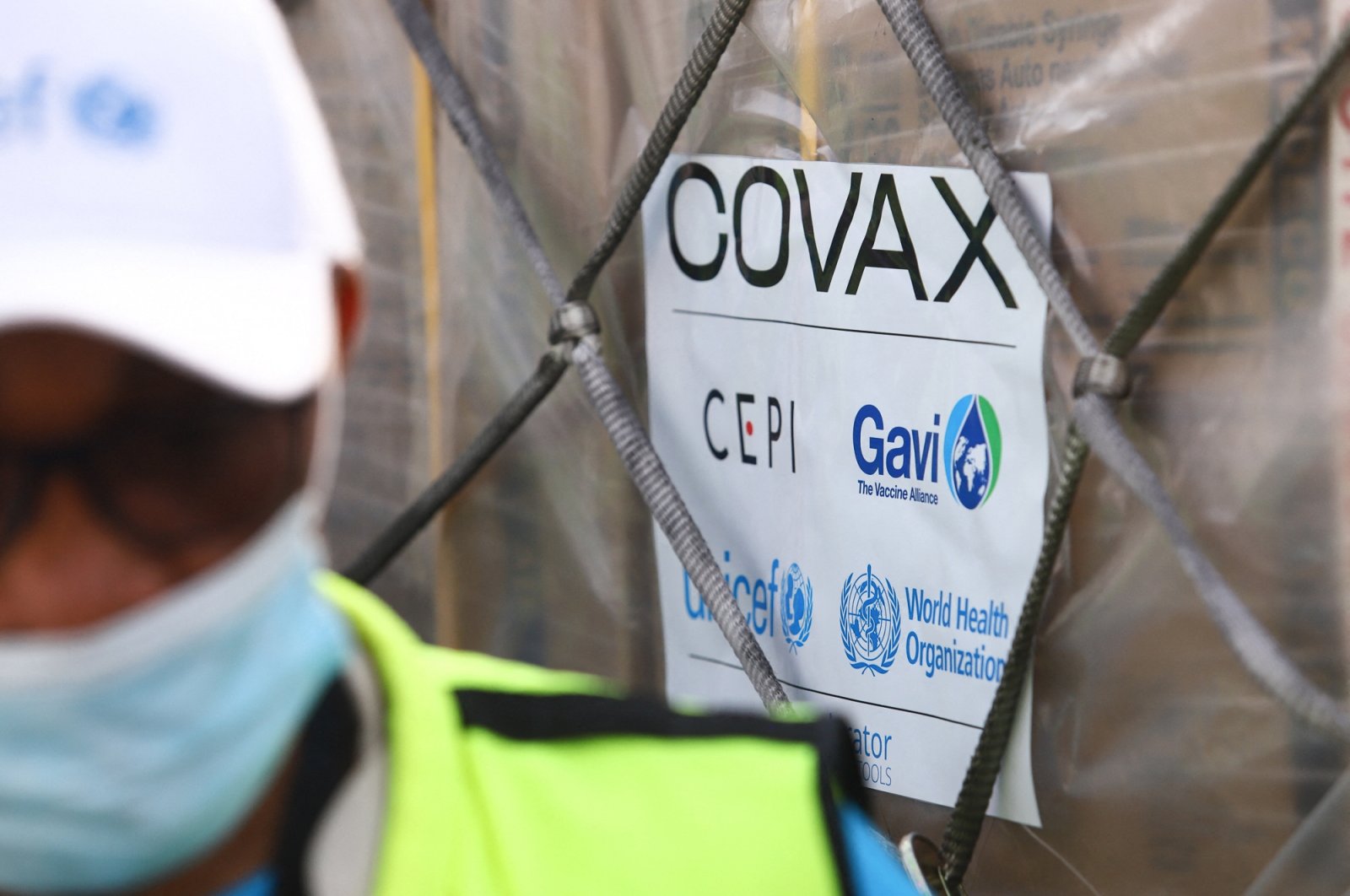 This photograph shows a Covax tag on a shipment of COVID-19 vaccines from the Covax global COVID-19 vaccination program, at the Kotoka International Airport in Accra, Feb. 24, 2021. (AFP Photo)
by Daily Sabah with AFP Feb 24, 2021 12:40 pm

Ghana received the first shipment of COVID-19 vaccines from COVAX on Wednesday, a global scheme to procure and distribute inoculations for free, as the world races to contain the pandemic.

COVAX, launched last April to help ensure a fairer distribution of coronavirus vaccines between rich and poor nations, said it would deliver 2 billion doses to its members by the end of the year.

"We are pleased that Ghana has become the first country to receive the COVID-19 vaccines from the COVAX facility," the U.N. Children's Fund (UNICEF), which organized the shipment from Mumbai, said in a joint statement with the World Health Organization (WHO) – both backers of COVAX.

It said the 600,000 doses of the AstraZeneca-Oxford vaccine licensed by the world's largest vaccine manufacturer, the Serum Institute of India, are part of an initial tranche of deliveries "headed to several low and middle-income countries."

The Emirates flight carrying the vaccines touched down at Accra's Kotoka International Airport shortly after 7:40 a.m. GMT, in images broadcast on television. COVAX had said it aimed to deliver 2,412,000 doses of the vaccine to Ghana.

"This morning #Ghana makes history as the 1st country in the world to receive these vaccines. Together lets ensure that everyone can be protected," UNICEF Ghana said in a statement on Twitter.

The country's food and drug authority has authorized the use of the vaccines made in India as well as the Sputnik V vaccine from Russia, according to local media. The West African nation has recorded 80,759 COVID-19 cases and 582 deaths since the start of the pandemic. These figures are believed to fall short of the real toll as the number of tests is low. Health workers and other front-line staff are meant to be among the first to receive doses.

"In the days ahead, front-line workers will begin to receive vaccines," UNICEF Executive Director Henrietta Fore said. "The next phase in the fight against this disease can begin – the ramping up of the largest immunization campaign in history."

COVAX, led by Gavi the Vaccine Alliance, the WHO and the Coalition for Epidemic Preparedness Innovations (CEPI), had anticipated a first round of deliveries to take place in March with some early shipments occurring in late February.

The continent, relatively spared by the pandemic, was the last except Oceania to reach the threshold of 100,000 deaths, which Europe crossed in April 2020. At the height of the pandemic in January, Africa had 906 deaths per day.

To help speed up immunization of the continent's 1.3 billion people, the African Union said it had secured 270 million doses of COVID-19 vaccines for delivery this year.

The WHO on Monday blasted wealthy countries for hogging COVID-19 vaccines and hindering the pathway for poorer nations to get them too. WHO Director-General Tedros Adhanom Ghebreyesus said some rich countries' direct deals with manufacturers had meant that previously-agreed vaccine allocations for poorer countries, via the COVAX program, were being reduced. Ghebreyesus urged wealthy nations to share vaccine doses with COVAX, saying the goal of equitable distribution was "in jeopardy."

"So far 210 million doses of vaccine have been administered globally, but half of those are in just two countries," Ghebreyesus said in Geneva on Tuesday. "More than 200 countries are yet to administer a single dose."

Some 145 participating economies are set to receive 337.2 million doses – enough to vaccinate a little over 3 percent of their combined populations. COVAX has said it hopes to raise the figure to up to 27% in lower-income countries by the end of December.

New variants of the virus, including in neighboring Nigeria, are spreading across the continent with the U.K. and South African variants recorded in cases in Ghana.

"It is strongly recommended for countries to use the AstraZeneca vaccine even if the ... new variants are present," the WHO said in a statement last week.

In Ghana, schools reopened in January after a 10-month closure, but large social gatherings are banned and land and sea borders have remained closed since March 2020. Ghana's economic growth is expected to plummet this year to its lowest in three decades, to 0.9%, according to the International Monetary Fund (IMF), from 6.5% in 2019.