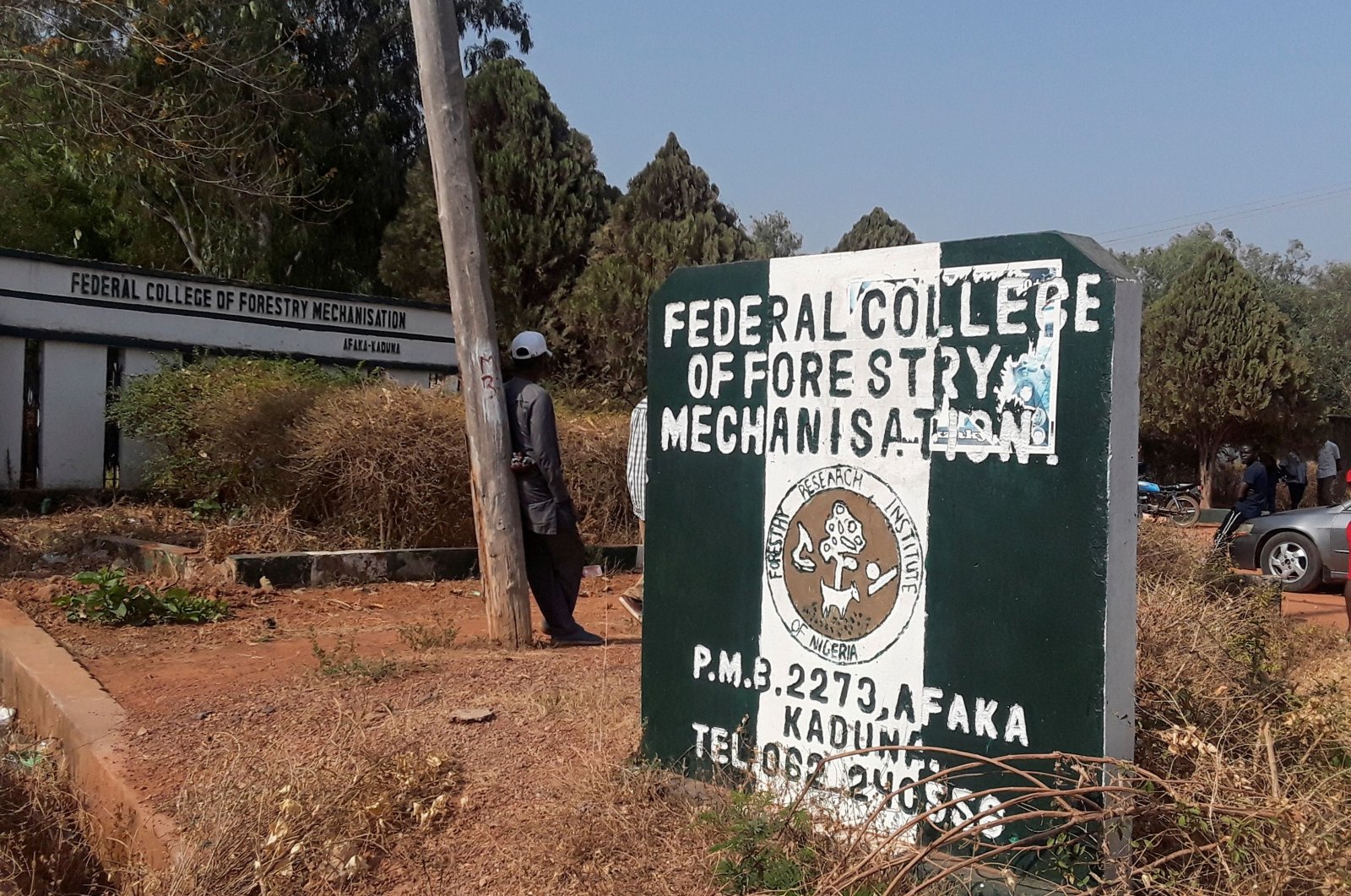 A man rests on a pole beside the signage of the Federal College of Forestry Mechanisation where gunmen abducted students, in Kaduna, Nigeria March 12, 2021. (Reuters Photo)
by French Press Agency - AFP Mar 12, 2021 4:43 pm
RECOMMENDED

Nigerian gunmen have snatched an unspecified number of students from a college in a northwestern state, local police said Friday, in the latest abduction targeting schools.

The college was said to have some 300 male and female students – mostly aged 17 and older – at the time of the attack, but it was not immediately clear how many were seized or missing. "There was a kidnapping incident at the forestry college but we have no details of the number of students abducted," state police spokesperson Mohammed Jalige told Agence France-Presse (AFP).

"The police alongside the army are working to trace and rescue the students," he said. Heavily-armed gangs in the northwest and central Nigeria have stepped up attacks in recent years, kidnapping for ransom, raping and pillaging.

The bandits are recently turning their attention on schools where they kidnap students or schoolchildren for ransom – Thursday's was at least the fourth such attack since December. Samuel Aruwan, Kaduna state's home affairs commissioner visited the school early Friday.

Confirming the latest abduction, he said an investigation was underway. Residents also heard repeated gunshots in the area late on Thursday.

"We kept hearing gunshots which we ignored as shooting drills from the Nigeria Defence Academy which is a stone-throw from the forestry college," said Mustapha Aliyu, who lives in the area. "It was only when we came out for the morning prayers in the mosque that we learned it was gunmen who took away students from the college," he said. Aliyu said only female students might have been seized from the college.

"From what other students told us the gunmen only took female students," said Aliyu.

The area is notorious for banditry and armed robbery, especially along the highway linking the city with the airport.

The gangs are largely driven by financial motives and have no known ideological leanings. Victims are often released shortly after negotiations though officials always deny any ransom payments. On Saturday, criminal gangs known locally as bandits broke into the staff quarters of the nearby Kaduna airport, abducting 12 people, according to airport officials. On Feb. 27, gunmen abducted 279 schoolgirls in nearby Zamfara state.

A week earlier, gunmen seized 42 people, including 27 students from an all-boys boarding school in central Niger state. In December, hundreds of schoolboys were seized in Katsina, President Muhammadu Buhari's home state while he was on a visit.

The U.S. has condemned the recent attacks on schools.

"Frankly, we're disgusted by this pattern of mass abductions of school kids. I can think of nothing more abhorrent," Michael Gonzales, deputy assistant secretary at the U.S. State Department's Bureau of African Affairs told a press briefing. He said the U.S. "is ready to provide appropriate support to the Nigerian government if requested to do so."