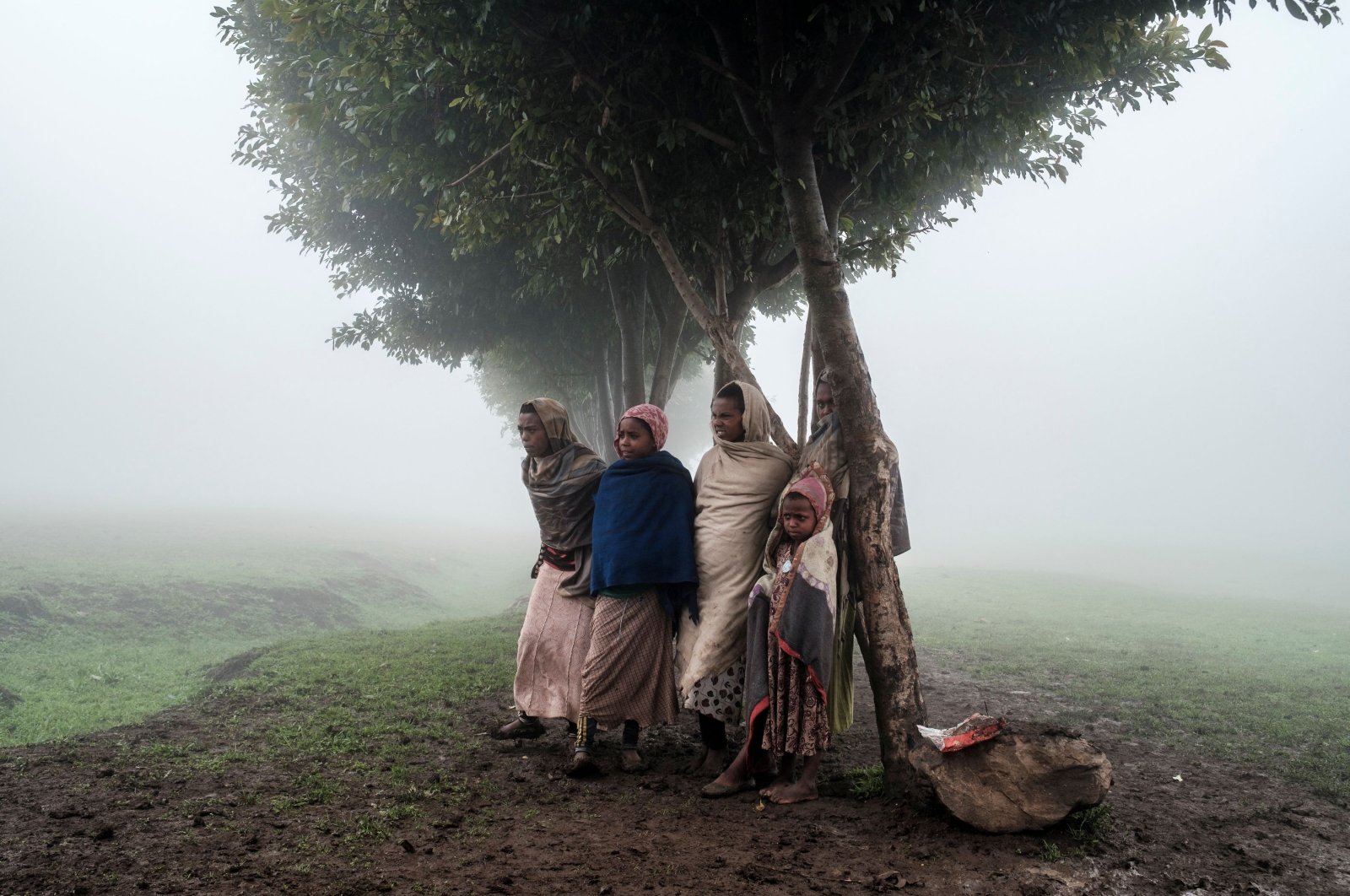 In this file photo, children stand under a tree on the site of a future camp for Eritrean refugees, in a rural area near the village of Dabat, 70 kilometers northeast of the city of Gondar, Ethiopia, July 13, 2021. (AFP Photo)
by ASSOCIATED PRESS Nov 16, 2021 11:07 am
RECOMMENDED

Nearly 200 young children have died of starvation in hospitals across Ethiopia's Tigray region as malnutrition soars one year after a brutal conflict broke out, according to a new survey.

The data collected from 14 hospitals offers a rare look at the scale of suffering in Tigray, which is grappling with a communications blackout and what the U.N. describes as a de facto aid blockade, meaning most essential medical supplies are no longer available.

Yet the toll is hardly comprehensive, given that most health facilities are not functional and Tigrayan health workers have only been able to reach roughly half of the region's districts, said Dr. Hagos Godefay, head of the health bureau in Tigray's pre-war government.

Hagos described the unpublished findings, some of which were collected in partnership with Mekele University in Tigray's capital, in an interview with Agence France-Presse (AFP) this week.

"We have registered more than 186 deaths," Hagos said, referring to fatalities caused by severe acute malnutrition in children younger than five. "We collected this information from hospitals only."

Some 29% of children are acutely malnourished, up from 9% before the war, Hagos said.

For severe acute malnutrition, the figure is 7.1%, up from 1.3% before the war, he said. Only 14% of surveyed households report having enough access to food, down from 60%, he said, adding that he fears what is unfolding in areas his teams have so far been unable to reach.

"For those areas that are not accessible, you can only imagine how many children are dying because of starvation. They are living in remote areas, there is no water... there is no food, no communication, no health facility," he said. "So I am telling you if we go to the remote areas it will double for sure."

The 2019 Nobel Peace laureate promised a swift victory, but by late June the TPLF had retaken most of the region including Mekele and has since advanced south.

Since mid-July less than 15% of needed aid has been able to enter Tigray, according to the UN, raising the specter of the kind of mass starvation that turned Ethiopia into a byword for famine in the 1980s.

Agence France-Presse (AFP) has previously documented scattered starvation deaths in multiple parts of Tigray, describing how mothers feed leaves to their children in a desperate bid to keep them alive.

The survey findings Hagos described the four months from late June, when the TPLF retook control of Mekele, to late October.

The 14 hospitals still functioning in the region are each recording between three and four deaths weekly due to ordinarily treatable illnesses like pneumonia and diarrhea, Hagos said.

He added he was especially worried for tens of thousands of Tigrayans under "chronic follow-up," including 55,000 HIV-positive patients and others battling conditions like cancer, hypertension and diabetes.

Abiy's government has rejected claims it is blocking aid to Tigray, saying access has been restricted because of TPLF advances into neighboring Amhara and Afar regions.

In an interview with CNN last week, Abiy's spokeswoman Billene Seyoum said "the onus of responsibility on humanitarian access... is on the TPLF."

The U.S., however, has said access to essential supplies and services was "being denied by the Ethiopian government" while denouncing "indications of a siege."

And aid workers have sounded the alarm about government-imposed restrictions on medicines entering the region. Hagos said that with health facilities damaged across Tigray, banking services suspended and supply stocks now empty, there is little health workers can do.

"The commitment from the health work force is really amazing. They just want to work even without having a salary, but they don't have food to eat," he said.

As foreign envoys scramble to end the conflict, with U.S. Secretary of State Antony Blinken due in neighboring Kenya early Wednesday, the TPLF has said lifting the "siege" of Tigray is a condition for any cease-fire.

Hagos, too, said it was a must, describing the current situation as "collective punishment."

"The rights of the people of Tigray are not what we are negotiating here," he said. "If negotiations are to be done, they can only be on issues concerning a political settlement."