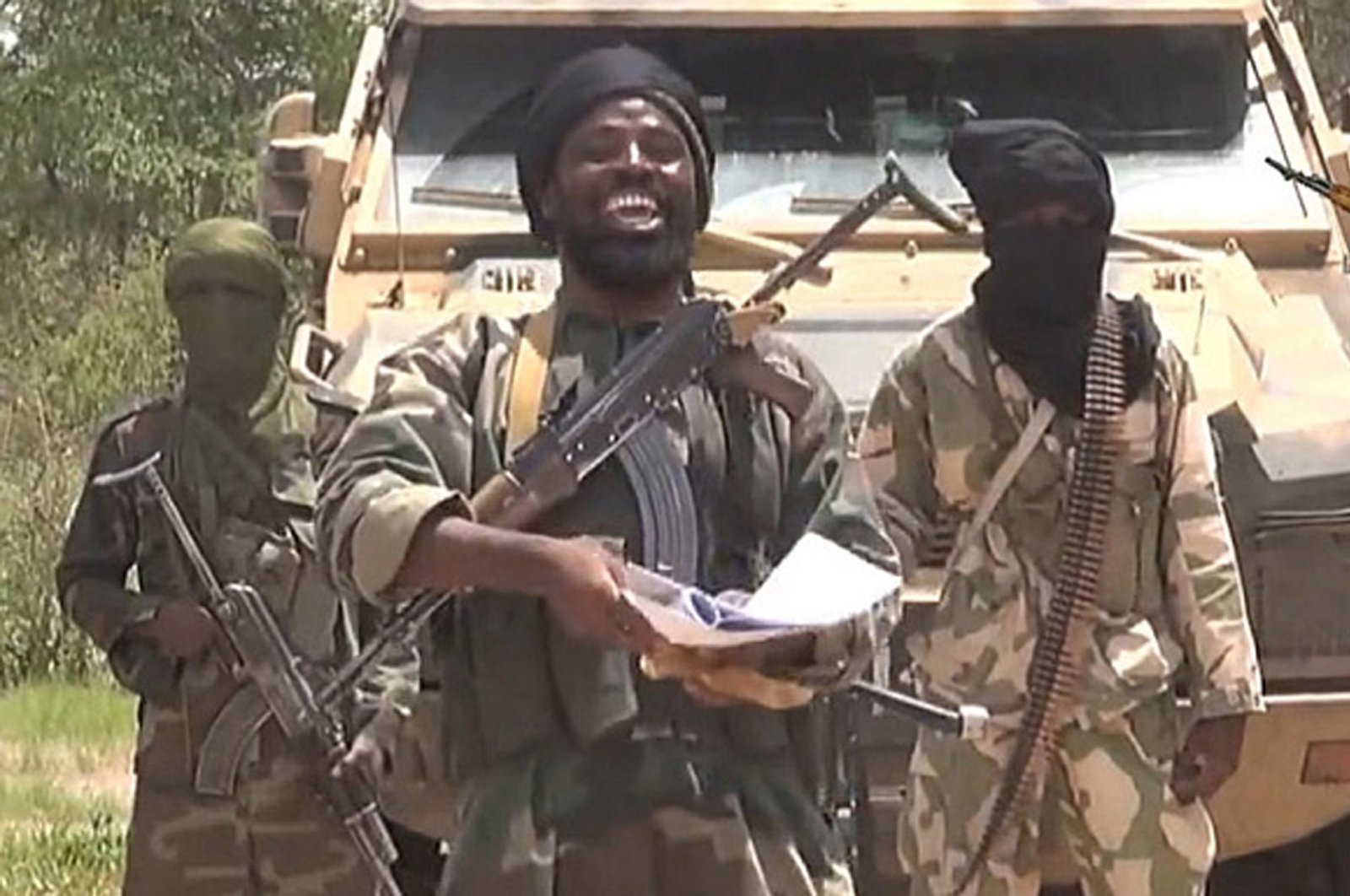 Boko Haram leader Abubakar Shekau (C) smiles in a video made and released by the terrorist group at an undisclosed location and date, in this screengrab taken on July 13, 2014. (AFP/Boko Haram/Getty Images)
by French Press Agency - AFP May 21, 2021 7:34 pm
RECOMMENDED

Seemingly unkillable Boko Haram leader Abubakar Shekau may be dead after his stronghold in the Sambisa forest in Borno state was ambushed by rival Daesh-allied terrorists on Wednesday, intelligence sources say.

Since taking over control of Boko Haram in 2009 from founder Mohammed Yusuf, Shekau has been reported dead several times, only to reappear.

In the latest attack, however, Shekau was seriously wounded after trying to kill himself to evade capture by Daesh's offshoot in West Africa Province (ISWAP) who surrounded him after a series of battles, the sources said.

Nigerian media was filled with speculation that the man who made international headlines for kidnapping nearly 300 schoolgirls in 2014 and 330 Nigerian students late last year might finally be dead.

But 24 hours after the news broke, the army was still investigating while details about what happened and where Shekau may be remain unclear.

Here is what we know.

More than 40,000 people have been killed and over 2 million displaced from their homes by the conflict in northeast Nigeria since 2009, and fighting has spread to parts of neighboring Chad, Cameroon and Niger.

Since 2016, two rival factions emerged from the Boko Haram movement after disagreements over Shekau's indiscriminate attacks on Muslim civilians and his use of women and children as suicide bombers.

On one side, Shekau's Boko Haram faction, known formally as Jama'tu Ahlis Sunna Lidda'awati wal-Jihad or JAS, was based in the Sambisa forest. It also operates in the far northern border of neighboring Cameroon as well as frontier areas of Chad and Niger.

The other is ISWAP with its stronghold in the Alagarno forest and areas of Lake Chad, a vast body of water with scattered islands.

Both groups target Nigeria's armed forces and those from states bordering northeast Nigeria. But sporadic clashes have also erupted between the two factions over influence and territory.

According to the local intelligence sources, a new round of infighting erupted in April during the Muslim holy month of Ramadan.

Boko Haram fighters ambushed an ISWAP brigade as they transported weapons to one of their main camps, sources said. Several ISWAP men were killed.

In retaliation, ISWAP launched an attack on a Boko Haram camp located on Lake Chad. Both sides suffered losses. But, the sources said, ISWAP took the fight to Boko Haram directly in the Sambisa forest located further south.

According to details from two intelligence sources, on Monday a convoy of ISWAP trucks mounted with machine guns entered the Sambisa forest area.

One group headed directly to the Boko Haram camp in Sabilul Huda, where Shekau had sought refuge. His faction had recently been weakened by military airstrikes.

ISWAP fighters managed to neutralize his guards and surrounded the house where Shekau had been holed up, the sources said.

What happened next is not fully clear, but Shekau was seriously wounded when he tried to kill himself to avoid being taken alive.

Intelligence sources said Shekau shot himself in the chest and was later rescued unconscious by some of his men and taken to an unknown location.

"The truth is he may hardly survive his wounds," one source said.

Sources are unclear about whether Shekau survived, as the Boko Haram leader has survived multiple reports of his death over the years including by the Nigerian army.

The Nigerian army spokesperson could not confirm any of the details and said an investigation was still ongoing.

Neither ISWAP nor Boko Haram has released any communique about the attack on Sambisa or the whereabouts of Shekau.

Is ISWAP taking over?

Whether he is seriously wounded or dead, the loss of Shekau would be a huge blow to his Boko Haram faction where he was a central figure for years, analysts said.

ISWAP has already become the more dominant force in Nigeria's northeast showing its capacity to carry out complex attacks on the armed forces.

While some pro-Shekau brigades along the Cameroon border and in Niger and Chad may want autonomy, ISWAP may now access a pool of Shekau's fighters and a partial reunification may be in the works, said Vincent Foucher, a fellow at French National Centre for Science Research.

"Surely it is under discussion, all these guys are connected, they know each other and there must be negotiations going on. There are still some unknowns but what is clear is that it is a big win for ISWAP," he said.

"A lot of people are happy to see Shekau dead, but it is not very good news if ISWAP becomes the single (terrorist group) in the area."