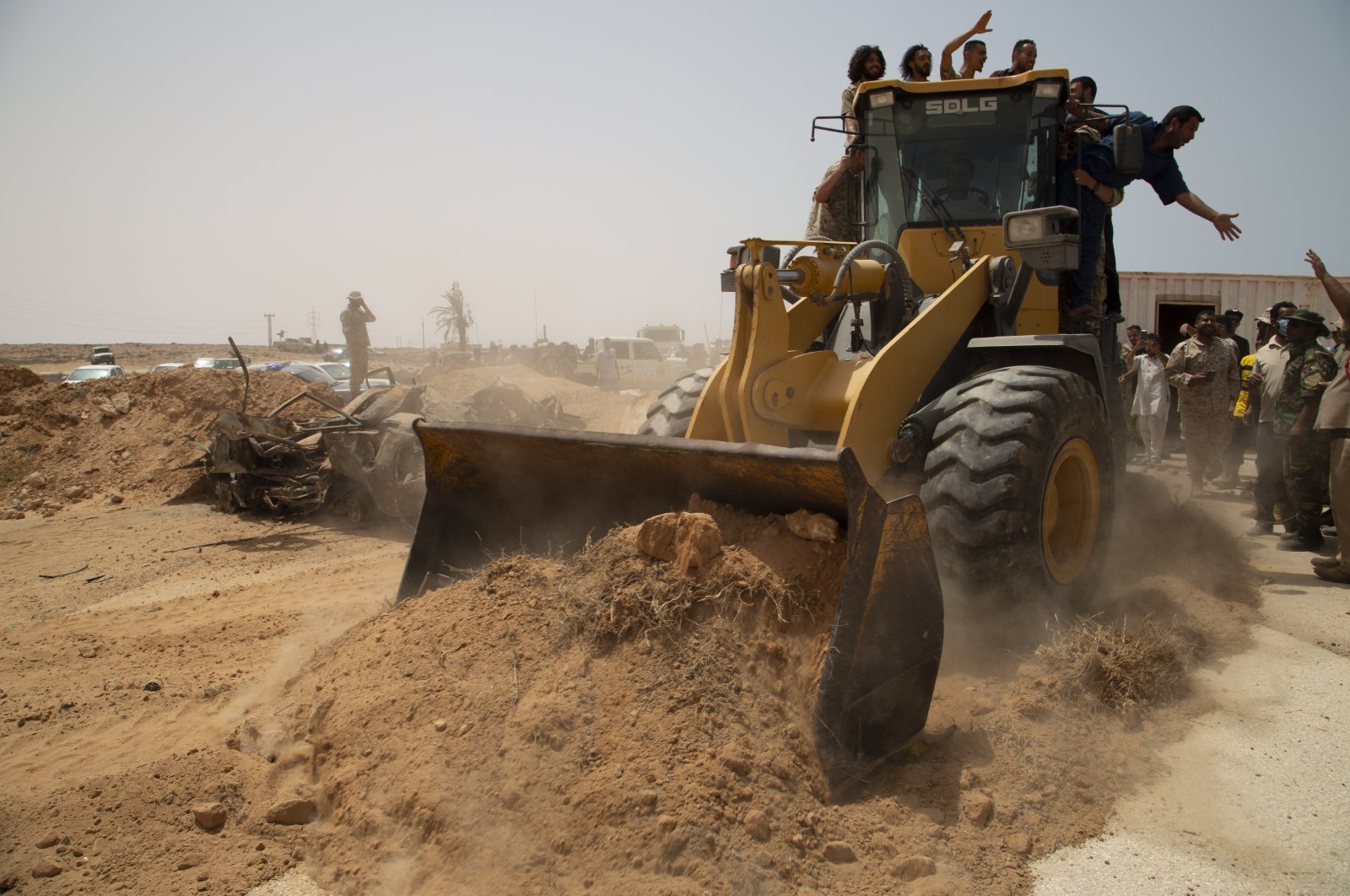 A bulldozer pushes earth during a ceremony to reopen the road between the cities of Misrata and Sirte Sunday, June 20, 2021. (AP Photo)
by DAILY SABAH Jul 07, 2021 9:50 am
RECOMMENDED

The Libyan military will continue to keep the critical Misrata-Sirte road open, despite the fact that militias loyal to putschist Gen. Khalifa Haftar do not abide by the terms of an agreement, according to a statement.

Gen. Abdulhadi Darah, the spokesperson for the Libyan military’s Sirte-Juffra joint operations center told Anadolu Agency (AA) that pro-Haftar forces have not been abiding by the terms of the agreement reached after the 5+5 military commission on June 20. He noted that the pro-Haftar forces have been keeping their side of the road closed, but the military will continue to keep their side open to facilitate the withdrawal of Russian-backed Wagner mercenaries.

“If Haftar militias open to the road without withdrawing mercenaries then we will close our side of the road and will not open it until they withdraw,” the spokesperson said.

According to the agreement reached after talks, the coastal road that connects significant population centers of the country’s east and west would be opened, while mines on this route would be removed for the safe passage of civilians and armed units. Under the agreement, foreign powers would also withdraw primarily to Tripoli and Benghazi.

On June 21, the Libyan interim government reopened the road connecting the country’s long-divided eastern and western cities, in the latest bid to reunite the territories after years of civil war.

The coastal highway has been closed since April 2019 after east-based putschist Gen. Khalifa Haftar launched a military offensive to wrest the capital, Tripoli, from the United Nations-recognized government. Its reopening was a long-held demand by the U.N. to enable the safe passage of civilians and goods.

In a symbolic gesture, Dbeibah rode a bulldozer and removed a sand barrier on the western side of the road, which he described as a "traffic artery.”

In an address, Dbeibah called on Libyans to brush aside divisions and join hands to achieve stability and rebuild the oil-rich country.

Libya has been mired in chaos since a NATO-backed uprising toppled and later killed longtime dictator Moammar Gadhafi in 2011. Since then, the oil-rich country has long been divided between a U.N.-supported government in the capital, Tripoli, and rival authorities based in the country’s east, each backed by armed groups and foreign governments.