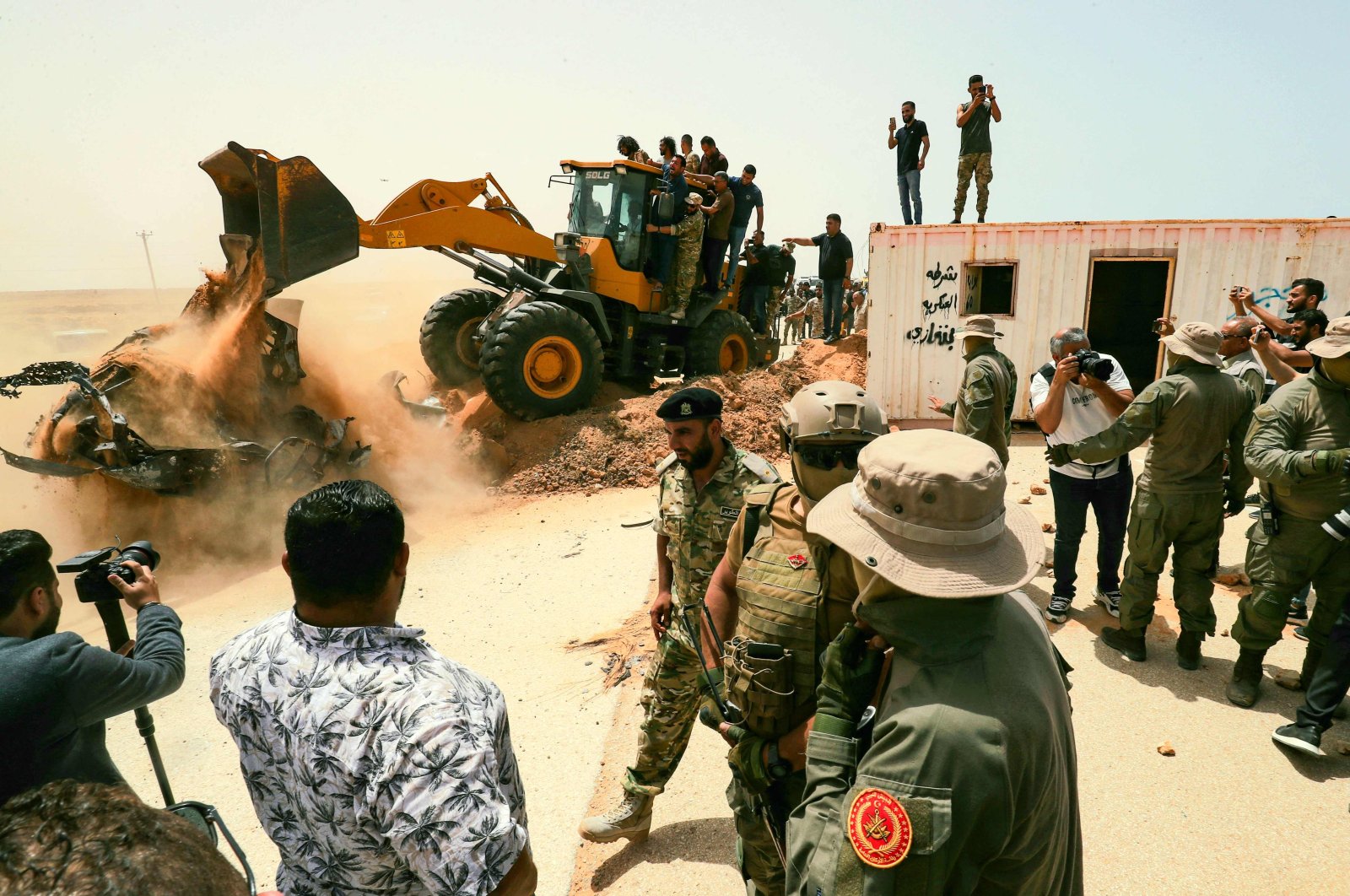 People cheer as an excavator removes rubble during a ceremony marking the reopening of a road between the cities of Misrata and Sirte, in the town of Buwairat al-Hassoun, Libya, June 20, 2021. (AFP Photo)
by Agencies Jun 21, 2021 10:51 am
RECOMMENDED

The Libyan interim government reopened a key highway connecting the country’s long-divided eastern and western cities, in the latest bid to reunite the territories after years of civil war.

The announcement comes three days ahead of an international conference on Libya that will be hosted by Germany and the United Nations in Berlin.

“I am so delighted to participate in the opening of this essential lifeline linking the east of our country to its west,” Libyan Prime Minister Abdul Hamid Mohammed Dbeibah told a crowd that gathered as bulldozers were towing away rocks and sand dunes blocking the road.

The coastal highway has been closed since April 2019 after east-based putschist Gen. Khalifa Haftar launched a military offensive to wrest the capital, Tripoli, from the U.N.-recognized government. Its reopening was a long-held demand by the U.N. to enable the safe passage of civilians and goods.

In a symbolic gesture, Dbeibah rode a bulldozer and removed a sand barrier on the western side of the road, which he described as a traffic “artery.”

In an address, Dbeibah called on Libyans to brush aside divisions and join hands to achieve stability and rebuild the oil-rich country.

The road was closed for more than two years due to fighting among Libya’s rivals.

However, a senior commander linked to warlord Haftar denied the reopening of the road, according to the news portal Libya Observer.

“No instructions have been received in this regard,” he was quoted as saying.

The U.S. Embassy in Libya hailed the move, saying in a tweet it was “paving the path for Libyans to have full control over their own affairs.”

Dbeibah was elected as interim prime minister, along with a four-member presidential council, by Libyan delegates at a U.N.-sponsored conference in February. They are meant to shepherd the country to nationwide elections late this year.

In March, the transitional government announced the resumption of flights between eastern Benghazi and western Misrata after seven years of suspension. Both cities have been key strongholds of Libya’s warring factions.

Libya has been mired in chaos since a NATO-backed uprising toppled and later killed longtime dictator Moammar Gadhafi in 2011. Since then, the oil-rich country has long been divided between a U.N.-supported government in the capital, Tripoli, and rival authorities based in the country’s east, each backed by armed groups and foreign governments.

On Wednesday, an international conference on Libya is set to kick off in Berlin to discuss preparations for the general elections and withdrawal of foreign forces who were brought in to fight for the opposing sides.

The resumption of traffic on the route stretching along Libya’s Mediterranean coastline comes amid tensions between interim authorities and Haftar’s troops. On Saturday, Haftar's militias announced the deployment of more troops in the largely lawless south, and the closure of the western border with Algeria, saying it was to combat terrorism. In response, Libya’s presidential council issued a decree sending their own brigades to the south.

Jalel Harchaoui, a Libya expert and senior fellow at the Global Initiative, said that he saw the announcement as posturing ahead of the Berlin negotiations. He said Haftar wants his troops to continue to be seen as “a force to be reckoned with,” but that it’s unlikely that they could enforce such a closure.

“Haftar does not have the ability to send forces to close the Algeria borders. It is just too long, too far away and beyond his capacity,” he said.