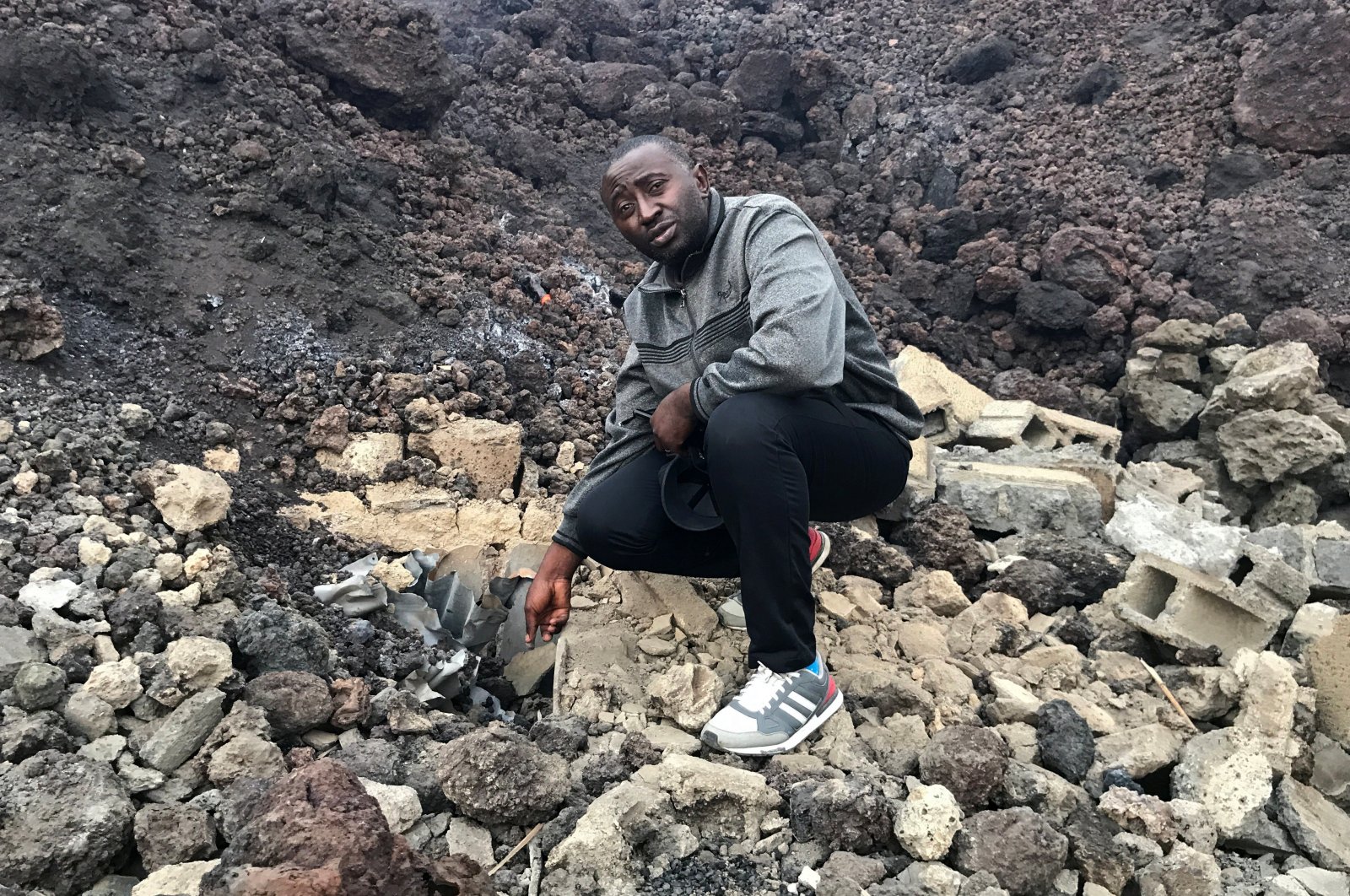 Nzanzu Muhiwa Zawadi, 37, points to the location of his house, which is covered by lava after the eruption of Mount Nyiragongo volcano, near Goma, in the Democratic Republic of Congo, May 24, 2021. (Reuters Photo)
by REUTERS May 26, 2021 12:46 am
RECOMMENDED

An earthquake measured at 5.3 magnitude by the Rwandan Seismic Monitor struck the border of Congo and Rwanda Tuesday. Several buildings collapsed in the city of Goma and stoked fears a nearby volcano would erupt again three days after dozens of people were killed and 17 villages were destroyed by lava.

The quake was the largest of over 100 tremors that have followed the eruption on Saturday of Congo's Mount Nyiragongo volcano, one of the world's most active and dangerous.

"We know that children were injured when a building collapsed on Tuesday just a few steps from the UNICEF office in Goma," the United Nations children's agency said.

The quake appeared to have destroyed several buildings in the city of 2 million, and a witness said at least three people were pulled from the rubble and taken to hospital.

It struck at 11:03 a.m., originating in Rugerero sector in western Rwanda, according to the Rwanda Seismic Monitor.

The city experienced 119 tremors on Monday, but the intensity has started to decrease, said Kasereka Mahinda, scientific director at the Goma Volcano Observatory.

"As soon as the rift recovers its balance, the tremors will stop," he told Reuters.

Multiple cracks in the earth have emerged in Goma in the last day, some several hundred meters (yards) long that cut across the city's main boulevards.

"The opening of these cracks on the roads like this is terrifying," said Joseph Mapendo, a 32-year-old motorbike taxi driver. "They should tell us if we should evacuate the town or if we can stay until the tremors are over."

About 1,000 houses were destroyed and more than 5,000 people displaced by the eruption, the U.N. has said.

"According to the authorities, 32 people have died in incidents related to the eruption, including seven people killed by lava flow and five others asphyxiated by gases," the U.N. refugee agency UNHCR said.

The lava flow stopped a few hundred meters short of the city limits, but wrecked 17 villages on the way, cut the principal electricity supply and blocked a major road, disrupting aid deliveries to one of the most food-insecure places in Africa.

The lava lake in the volcano's crater appears to have refilled, raising fears of new fissures or another eruption, UNHCR said. Goma-based volcanologist Dario Tedesco said on Monday he feared the tremors could open another fracture.

The government said a 1.7-kilometer (1.1-mile) stretch of road connecting Goma to the north of the province was covered with lava, blocking the movement of people and goods to an area where some 280,000 people have been displaced by conflict and fighting since January.

The U.N. said it would take days to reopen the road and that it was seeking permission from the government to start reusing Goma airport. The hub for aid relief for the east of the country was closed after lava came within 300 meters (984 feet).

More than half a million people have lost access to safe water, as lava destroyed one of the most important water supply sources, the International Federation of the Red Cross (IFRC) said.

"Although the flow of lava has stopped, authorities have warned that the danger is not yet over and that seismic activity in the area could cause further lava flows. Infrastructure damage is not ruled out," the IFRC said.