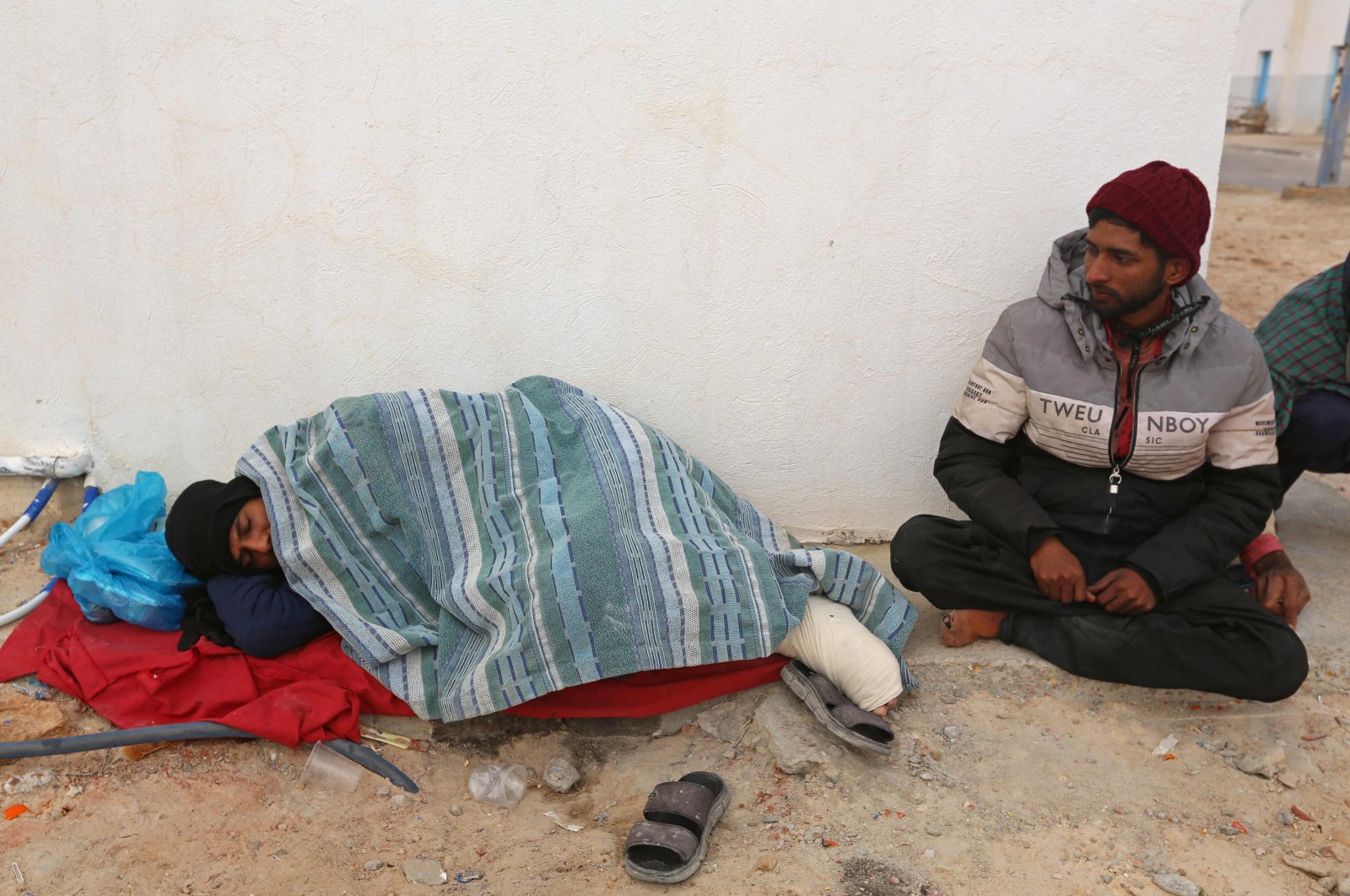 Migrants rescued by Tunisia's national guard during an attempted crossing of the Mediterranean by boat, rest on the beach at the port of el-Ketef in Ben Guerdane in southern Tunisia near the border with Libya, on Jan. 6, 2022. (AFP)
by ASSOCIATED PRESS Jan 10, 2022 7:27 pm
RECOMMENDED

Libyan security forces violently dispersed a sit-in organized by migrants in protest of the recent shuttering of a U.N. community center in Tripoli, arresting hundreds, migrants and activists reported Monday.

The troops came overnight, smashed up the protest site and arrested hundreds, said activist Tarik Lamloum. Those detained were sent to a detention center in the nearby town of Ain Zara. Others managed to flee from the raid, he said.

Lamloum, who works with the local Belaady Organization for Human Rights, said at least one migrant community leader was shot during the raid.

The migrants, including women and children, had camped outside the center in Tripoli since October, seeking protection following a massive crackdown on migrants, and demanding protection and better treatment at the hands of Libyan authorities.

Aiysha, a Sudanese migrant, was part of the sit-in protest along with her family since October. The mother of two said police beat and detained migrants. She was among those detained.

“We were caught off guard," she said, speaking by phone from the detention center in Ain Zara. She gave only her first name, fearing for her safety. "They burned the tents, burned everything.”

The Norwegian Refugee Council (NRC) and the International Rescue Committee said more than 600 migrants were detained in the raid.

“This is the culmination of a disastrous situation that has deteriorated” since the mass detention of migrants in October, said Dax Roque, the NRC’s Libya director.

Both groups urged Libyan authorities to immediately release those detained and provide them protection from further violence.

A government spokesperson did not answer phone calls and messages seeking comment.

In the October crackdown, Libyan authorities rounded up more than 5,000 migrants, including hundreds of children and women – dozens of them pregnant, according to the United Nations. Authorities at the time described it as a security operation against illegal migration and drug trafficking. The detained migrants were taken to overcrowded detention centers, prompting an outcry from the U.N. and human rights groups.

Oil-rich Libya has been engulfed in chaos since a NATO-backed uprising toppled and killed longtime dictator Moammar Gadhafi in 2011. The North African country has in recent years emerged as the dominant transit point for migrants fleeing war and poverty in Africa and the Middle East, hoping for a better life in Europe.

Traffickers have exploited the chaos and often pack desperate families into ill-equipped rubber or wooden boats that stall and founder along the perilous Central Mediterranean route. Thousands have drowned along the way, others have been intercepted and returned to Libya.

Those detained on land and others returned to shore are often taken to government-run detention centers rife with torture, sexual assault and other abuses. U.N.-commissioned investigators said in October that abuse and ill treatment of migrants at sea, in detention centers and at the hands of traffickers in Libya amount to crimes against humanity.

The Libyan government last month named Mohammed al-Khoja, a militia leader implicated in abuses against migrants, to head the Department for Combating Irregular Migration. The agency oversees the detention centers under the Interior Ministry.

Al-Khoja was the deputy head of DCIM and for years ran the Tarik al-Sikka detention center in Tripoli, which is notorious for abuses including beatings, hard labor and a massive ransom scheme. He also has close ties to other militia leaders and human traffickers in western Libya sanctioned by the U.N.

The European Union, which has given Libya millions of euros to help stem the departure of migrants on the dangerous journey, said Monday it was seeking clarification from Libya’s government on al-Khoja's appointment.

“We think that it’s in the interest of Libya to have in important positions people who have a clean track record,” said European Commission spokesperson Peter Stano.

Vincent Cochetel, the U.N. refugee agency's special envoy for the Central Mediterranean, decried the appointment last week, saying: “This is quite telling of the situation in which we are. Do not go to Libya, it is unsafe.”

Libya is one of the biggest recipients of money from the European Union’s trust fund for Africa – much of it destined for migration purposes. The North African country has received almost half a billion euros ($566 million) from the fund since 2015. The EU has also helped to supply ships and paid for the refurbishment of older vessels used by the Libyan coast guard. It has also trained coast guard personnel, some of whom stand accused of migrant abuses.