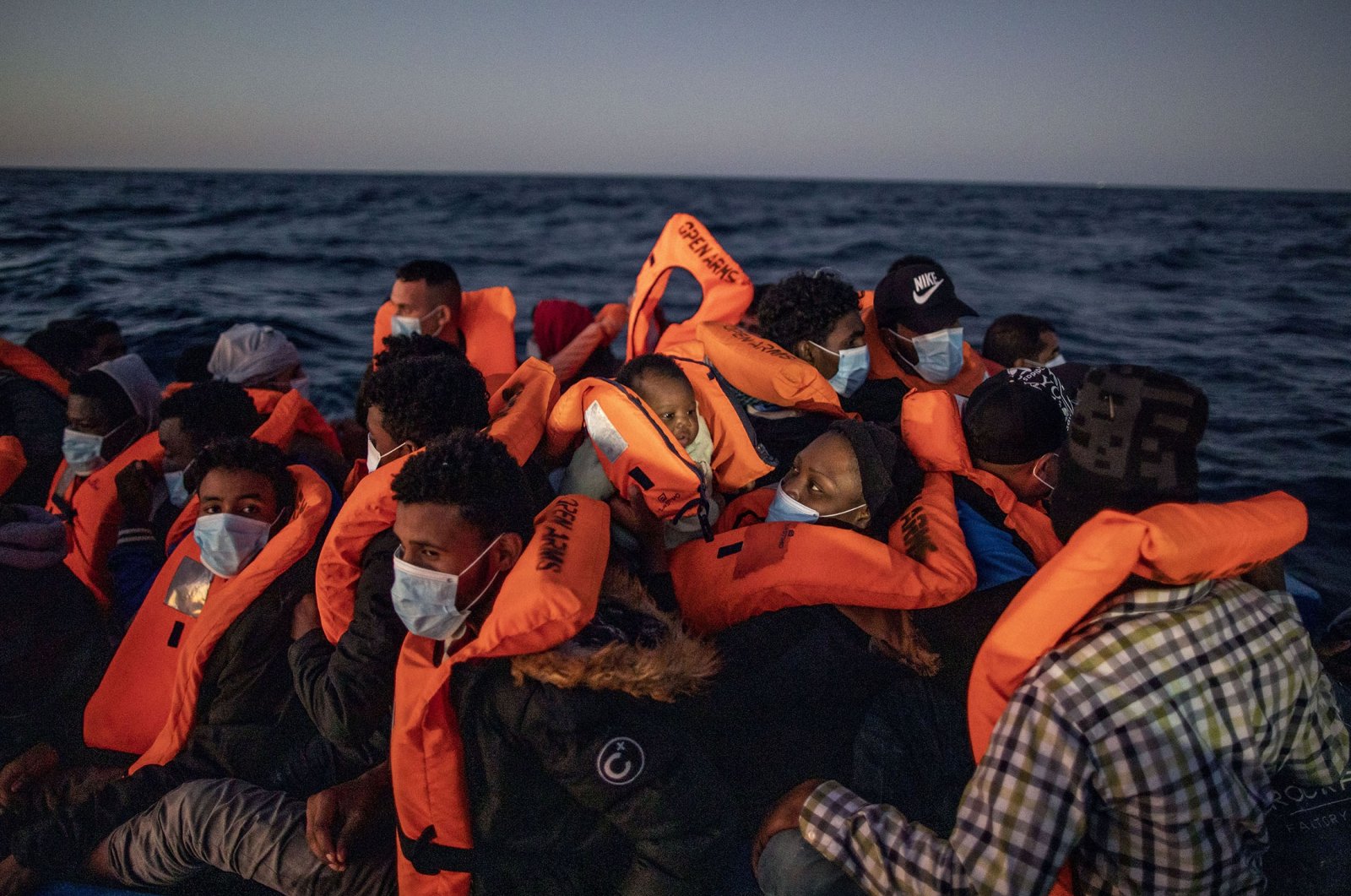 A woman holds a 3-month-old baby as migrants and refugees from different African nationalities wait for assistance on an overcrowded rubber boat, as aid workers of the Spanish NGO Open Arms approach them in the Mediterranean Sea, Feb. 12, 2021. (AP Photo)
by ASSOCIATED PRESS Feb 25, 2021 12:56 pm

The February storm is unforgiving, violently shaking the humanitarian rescuers’ vessel as they try to revive a faulty engine and save African migrants drifting in the Mediterranean Sea after fleeing Libya on unseaworthy boats.

Not only must they brave 70 kph (43 mph) winds and 4-meter (13-foot) waves, but also win the race against the Libyan Coast Guard, which has been trained and equipped by Europe to keep migrants away from its shores.

In recent days, the Libyans had already thwarted eight rescue attempts by the Open Arms, a Spanish nongovernmental organization vessel, harassing and threatening its crew in the international waters of the central Mediterranean, where 160 people have died so far this year.

The latest tragedy took place on Feb. 20, when a rubber boat carrying 120 people started taking in water and waited for hours until a commercial ship in the area arrived to help. Forty-one people drowned, including three children and four women, said the U.N.'s migration agency, the International Organization for Migration (IOM).

Those who are saved at sea are not necessarily safe. According to IOM, from Jan. 1 to Feb. 22 nearly 3,600 people, including dozens of women and children, have been intercepted and forcibly returned to Libya.

There, they are placed in squalid detention centers and are subject to abuse, torture, extortion and rape.

About 2,530 people have made it to Europe after departing Libya so far this year.

Among them is 3-month-old Moise, whose chubby cheeks barely stood out from underneath the oversized lifejacket that rescuers strapped on him as they transferred the baby and his Cameroonian mother to safety aboard the Open Arms rescue ship.

A day later, rescuers plucked 5-year-old Timi from a rubber dinghy under the intimidating gaze of the Libyan Coast Guard a few yards away. Together with her mother, she had embarked on the risky route to Europe through the Libyan desert six months ago to flee female genital mutilation in their native Ivory Coast, where the practice affects 55% of young girls, according to UNICEF.

Despite nausea and vomiting caused by the rough seas, the prospects of a safer future in Europe, together with warm blankets, helped Timi fall asleep on the overcrowded deck of the Open Arms ship.

It would take another three days of stormy navigation for the 146 people rescued by the group on its 80th mission in the central Mediterranean to reach a safe harbor in Sicily.

But before they can even begin the challenging process of starting a new life on European soil, they must board yet another ship and undergo a 14-day quarantine, a preventive measure imposed by the Italian government to curb the spread of COVID-19 during the pandemic. Until then, they can still only dream of a better life.