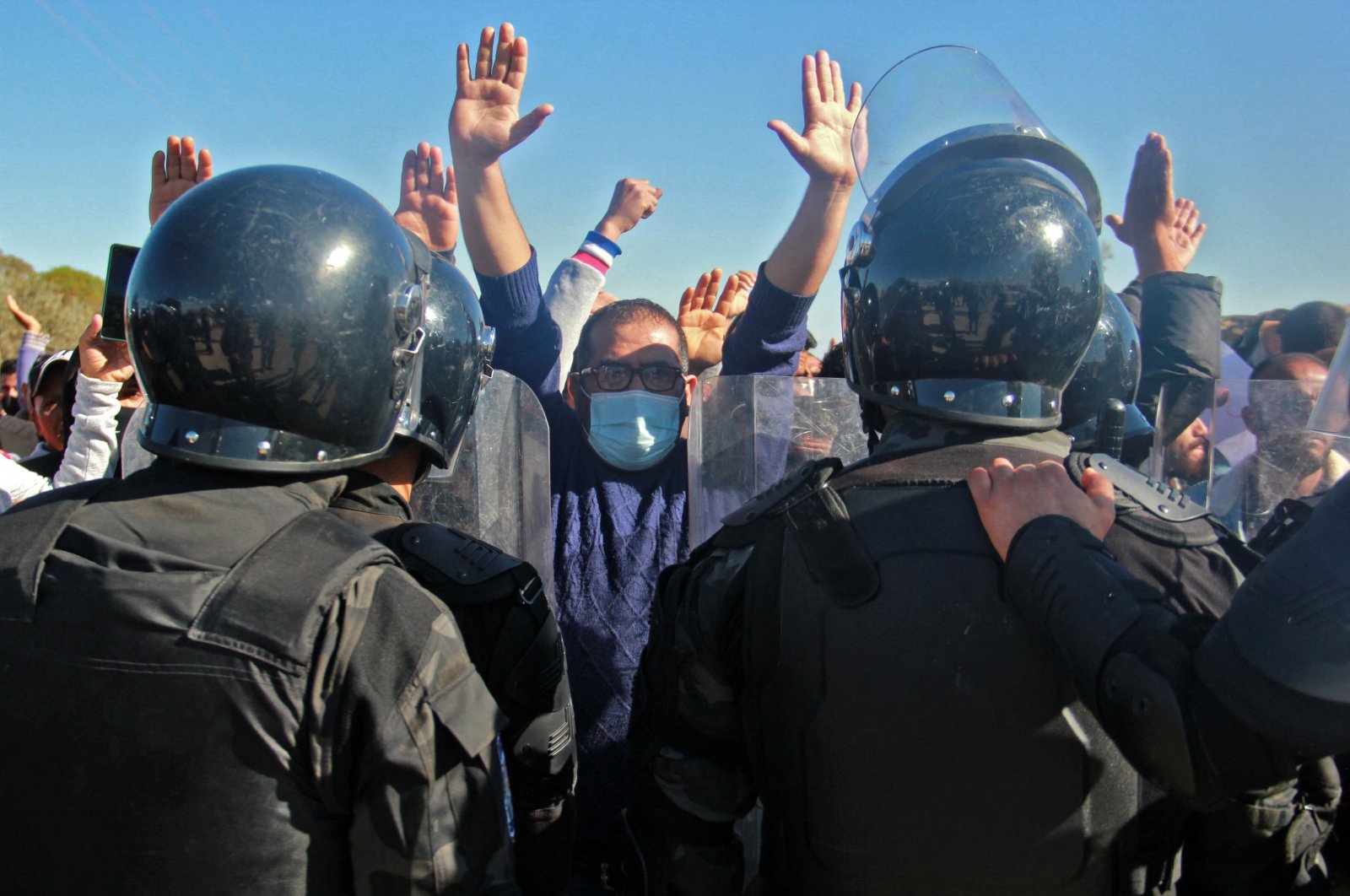 Members of the security forces face Tunisian anti-government demonstrators during a general strike following the reopening of a rubbish dump, in the central region of Sfax, which has seen weeks of angry demonstrations over a growing waste crisis, Aguereb, Tunisia, Nov. 10, 2021. (AFP Photo)
by DAILY SABAH Nov 11, 2021 12:36 pm
RECOMMENDED

The political destabilization in Tunisia that was followed by a brutal crackdown on the country's prime minister and government officials took on a different dimension after Tunis' decision to prosecute civilians in military courts, the latest move by President Kais Saied to cement his power.

Prominent human rights organization Amnesty International slammed Saied on Wednesday, urging the suspension of prosecutions of civilians in military courts and saying that a large number of people had faced a trial for simply criticizing authorities in another sign of democracy fading away under the president's rule.

"In the past three months alone, the military justice system has investigated or prosecuted at least 10 civilians for a range of offenses," the United Kingdom-based human rights group said, adding that between the Tunisian revolution of 2011 and 2018, only six civil cases were filed with such courts.

In July, Saied suspended the Tunisian parliament and fired Prime Minister Hichem Mechichi, triggering criticism from opponents within the country and global leaders. Tunisia's largest party, the Ennahdha Movement party, which has 53 seats in the 217-member parliament, rejected Saied’s moves, deemed them a violation of the Tunisian constitution and accused him of staging a coup.

The coup followed a spate of detentions of high-ranking officials and the storming of opposition media outlets. Earlier, in September, Saied issued a decree that gave him almost unlimited power. The announcement came in a statement by the presidency titled "Presidential Order Concerning Extraordinary Measures.” According to an article published in the Tunisian Official Gazette, Saied gave himself power to issue "legislative texts" by decree, appoint the Cabinet and set its policy direction and basic decisions without interference.

The elected parliament, which he suspended in July due to a highly controversial reading of the constitution, resumed its activities, but its members stopped receiving salaries. They continue to be deprived of their immunity from prosecution.

Amnesty revealed four cases of civilians, a TV presenter, two members of the parliament and a prominent social media activist, who were "brought before the military justice system simply for criticising the president."

Tunisia's police from the National Brigade to Fight Criminality detained television presenter Amer Ayad and member of parliament Abdellatif Aloui from their homes on Oct. 3. The arrest came two days after they had appeared together on Ayad’s debate program, "Hassad 24." The two men made critical remarks about Saied and his recent decrees and voiced skepticism over the new prime minister appointee, Najla Bouden.

After reviewing the video of the program, Amnesty found that neither Aloui nor Ayad's statements constituted discriminatory language or incitement to violence, or otherwise went beyond the peaceful political criticism protected by international law.

"Yet in Tunisia, the number of civilians brought before the military justice system appears to be increasing at an alarming rate – in the past three months alone, more civilians have faced military courts than did in the preceding 10 years," she added. "As Tunisians debate the uncertain future of their country, it is more important than ever that authorities protect their right to do so freely – even when deemed 'insulting' – without fear of persecution," Morayef added.