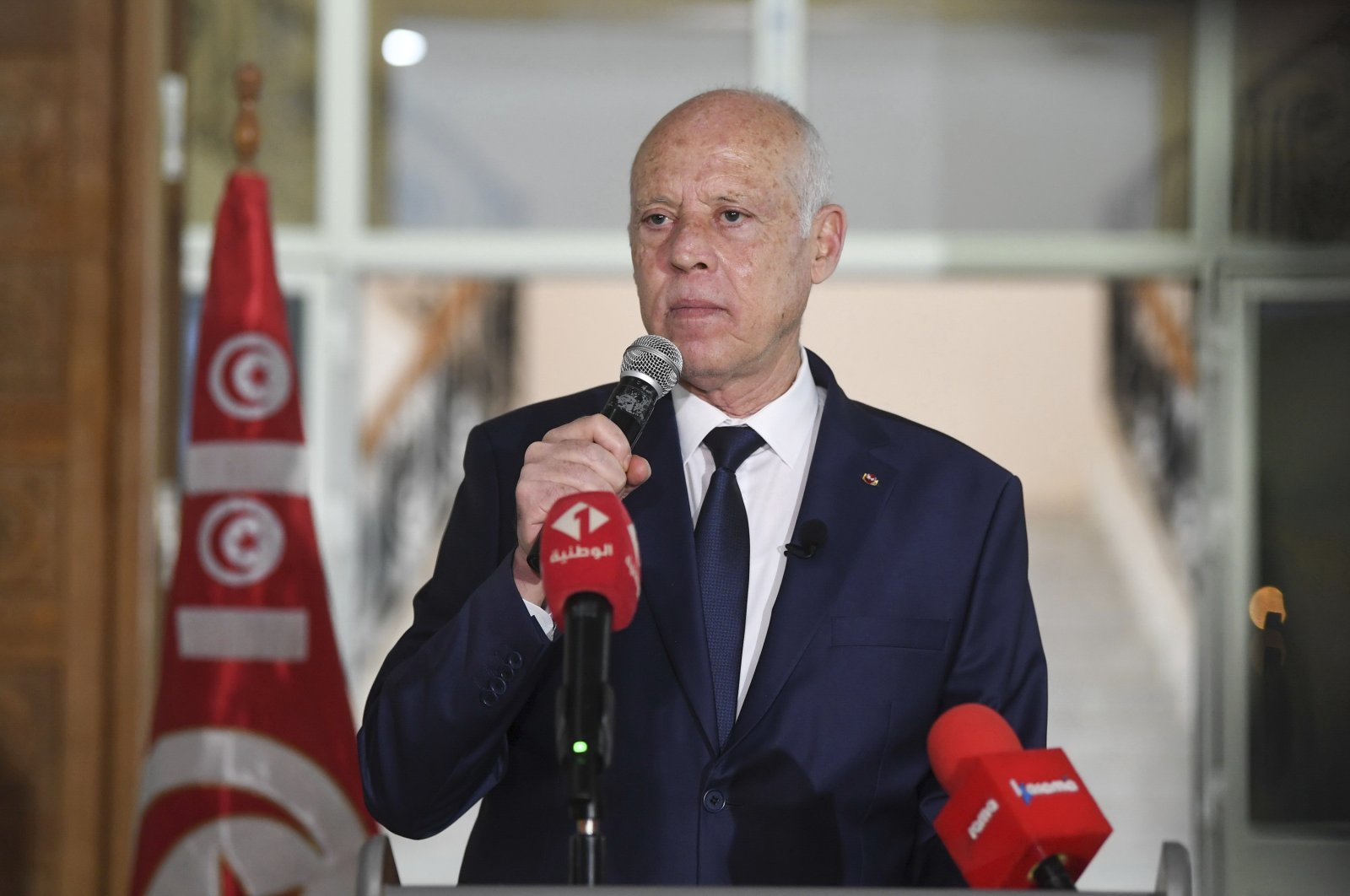 Tunisian President Kais Saied waves to Tunisian citizens as he delivers a speech during his visit to Sidi Bouzid, Tunisia, Sept. 20, 2021. (AP Photo)
by Agencies Sep 23, 2021 9:41 am
RECOMMENDED

Tunisian President Kais Saied declared on Wednesday he will rule by decree and ignore parts of the constitution as he prepares to change the political system, prompting immediate opposition from rivals.

Saied has held nearly total power since July 25 when he sacked the prime minister, suspended parliament and assumed executive authority, citing a national emergency in a move his foes called a coup. His intervention has undermined the democratic gains of Tunisia's 2011 revolution that ended autocratic rule and triggered the Arab Spring, despite Saied's pledges to uphold the freedoms won a decade ago.

As the weeks have passed, he has come under growing pressure from Tunisian political players and Western donors to name a prime minister and explain how he intends to move past the crisis. The new measures announced on Wednesday go far beyond the steps he took in July, writing into the the Tunisian Official Gazette rules that transform the country's political system to give the president almost unlimited power. The announcement came in a statement by the presidency titled "Presidential Order Concerning Extraordinary Measures.”

Rules published in the official gazette allow him to issue "legislative texts" by decree, appoint the Cabinet and set its policy direction and basic decisions without interference.

The elected parliament, which he suspended in July using a highly contentious reading of the constitution, will not only remain frozen but its members will stop being paid their salaries. They will still be stripped of immunity from prosecution.

Saied did not put any time limit on his seizure of power, but said he would appoint a committee to help draft amendments to the 2014 constitution and establish "a true democracy in which the people are truly sovereign."

The presidency said that in the meantime only the preamble to the existing constitution and any clauses that do not contradict the executive and legislative powers he has seized will remain in force.

The leader of the moderate Ennahdha Party, the biggest in the deeply fragmented parliament and a member of successive governing coalitions, immediately rejected Saied's announcements. Rached Ghannouchi said the announcement meant canceling the constitution and that Ennahdha, which had already declared Saied's July 25 intervention a coup, would not accept that.

A senior official in Heart of Tunisia, the second-largest party in parliament, accused Saied of conducting a "premeditated coup."

"We call for a national alignment against the coup," the official, Osama al-Khalifi, said on Twitter.

Attayar, Al Jouhmouri, Akef and Ettakatol parties said Saied has lost his legitimacy and called for an end to what they called a coup. Although the four parties are not the most powerful, they hold influence in the streets, especially Attayar, which was close to Saied before his intervention.

"We consider the president has lost his legitimacy by violating the constitution.. and he will be responsible for all the possible repercussions of this dangerous step," the four parties said in the statement, adding that Saied's move enshrined an absolute power monopoly.

This month a Saied adviser told Reuters that the president was planning to suspend the constitution and offer a new version via a public referendum, prompting a backlash from the powerful labor union and political parties. Saied has denied having dictatorial aspirations, insists his moves are constitutional and has vowed to uphold the rights of Tunisians.

His broadly popular intervention came after years of economic stagnation and political paralysis, aggravated by a sharp spike in COVID-19 cases and a day of violent protests. However, as the weeks have passed a growing number of Tunisians have grown concerned by the lack of clarity on Saied's plans and the absence of a prime minister.

Rights groups have also pointed to the arrest of several parliament members and business leaders on a variety of charges, including some old ones that were reactivated after their immunity was removed. One of the detained parliament members told Reuters on Wednesday he had been freed.

After criticism over the reported widespread use of travel bans against people in the political and business elite, Saied said last week that only people facing a judicial warrant or summons would be stopped from leaving Tunisia. The first protest against Saied since his intervention took place on Saturday, and activists have called for a larger one this weekend.

In another development, the Hope and Action Movement said Wednesday that its deputy Yassine Ayari has been released from Mornaguia prison in the capital after his arrest on July 30 for insulting the military, which he denied. In addition, the National Committee for Left Fighters and the Voice of Human Society civil society organizations asked Saied during a press conference Wednesday to apologize to the victims of tyranny during the pre-2011 revolution.

"The President of the Republic is obliged to apologize to the victims of tyranny” and compensate them, said Makram Al-Hajri, a spokesperson for the committee. According to Anadolu Agency (AA) he said the president should issue "a direct and binding response to us in which he pledges to implement all the outputs of the oversight bodies."