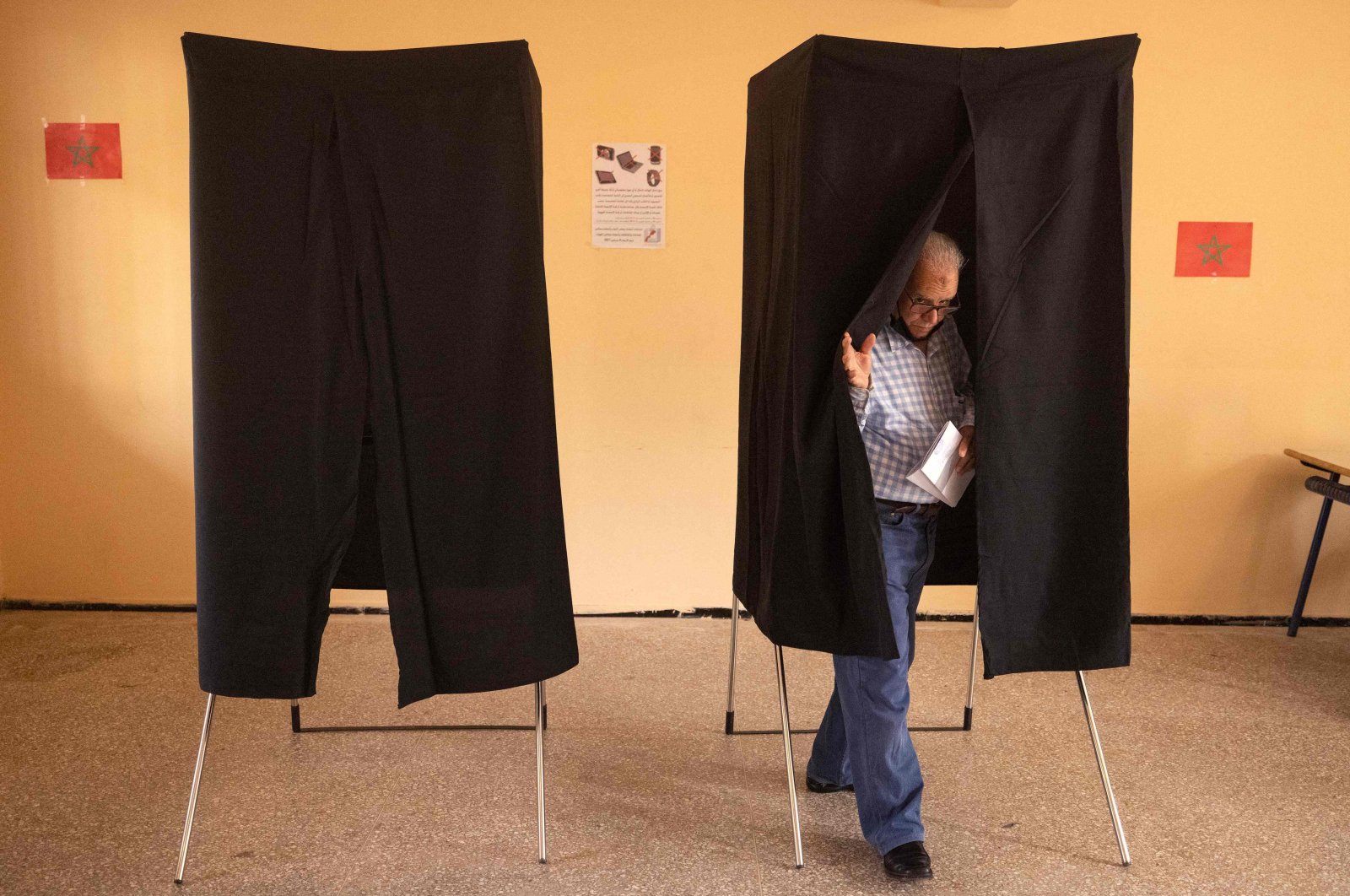 A voter prepares to cast a ballot during Morocco's parliamentary and local elections in the capital Rabat on Sept. 8, 2021. (AFP Photo)
by French Press Agency - AFP Sep 09, 2021 8:29 am
RECOMMENDED

Morocco's long-ruling coalition has suffered a crushing defeat in parliamentary elections to liberal parties seen as close to the palace, according to provisional results announced early Thursday.

The Justice and Development Party (PJD), which headed the ruling coalition for a decade, saw its support collapse from 125 seats in the outgoing assembly to just 12, Interior Minister Abdelouafi Laftit said during a press briefing following Wednesday's polls. It was far behind its main liberal rivals, the National Rally of Independents (RNI) and the Authenticity and Modernity Party (PAM), with 97 and 82, respectively, and the center-right Istiqlal Party with 78 seats in the 395-seat assembly.

The RNI, which was a junior member of the governing coalition, is headed by billionaire businessman Aziz Akhannouch, described as close to the palace, and the main opposition PAM was founded by the current royal adviser, Fouad Ali El Himma, in 2008.

The Istiqlal (Independence) party, the oldest in Morocco, made a remarkable comeback, adding 32 seats. The magnitude of the PJD's defeat was unexpected as, despite the absence of opinion polls that are banned near election time, the media and analysts had believed the PJD would still take first place. Swept to power in the wake of the 2011 uprisings around the Middle East and North Africa, the PJD had hoped to secure a third term leading a ruling coalition.

King Mohammed VI will name a prime minister from the party that won the poll to govern the nation of 36 million for the next five years, succeeding Saad-Eddine El Othmani. The final results should be known on Thursday. Turnout was 50.35%, according to the interior minister, higher than the 43% at the previous legislative polls in 2016, but lower than the 53% during the 2015 local elections. But changes to the voting system meant that it was the first time Morocco's 18 million voters cast ballots in both parliamentary and local elections on the same day, in an effort to boost turnout.

In 2011, the North African kingdom adopted a new constitution devolving many of the monarch's powers to parliament and the government. However, regardless of who holds elected office, major decisions continue to come from initiatives of King Mohammed VI. On Wednesday evening, PJD alleged "serious irregularities," including "obscene cash handouts" near polling stations and "confusion" on some electoral rolls, with some voters finding they were not listed.

However, the interior minister said voting took place "under normal circumstances" apart from some isolated incidents. The short, largely lackluster election campaign, with no big gatherings due to the coronavirus, had already been marred by accusations of vote buying. The PJD and the RNI also exchanged heated barbs in the final days ahead of the vote.

"The head of government must be a political personality with integrity who is above suspicion," he said. Akhannouch retorted in an interview on Monday that the attacks were "an admission of failure" by his opponents.

Following the previous elections in 2016, the RNI leader secured critical ministerial jobs for his party, including the economy and finance and industry portfolios. For the first time since the first elections were held in Morocco in 1960, parties' shares of seats will be calculated based on registered voters, rather than those who actually cast their ballots, in an amendment seen as favoring smaller parties.

Whatever the result, political parties are expected to adopt a charter for a "new model of development" with a "new generation of reforms and projects" in the coming years, the king announced recently. All parties are expected to sign up, regardless of who wins the election. The plan's major aims include reducing the country's wealth gap and doubling per-capita economic output by 2035.