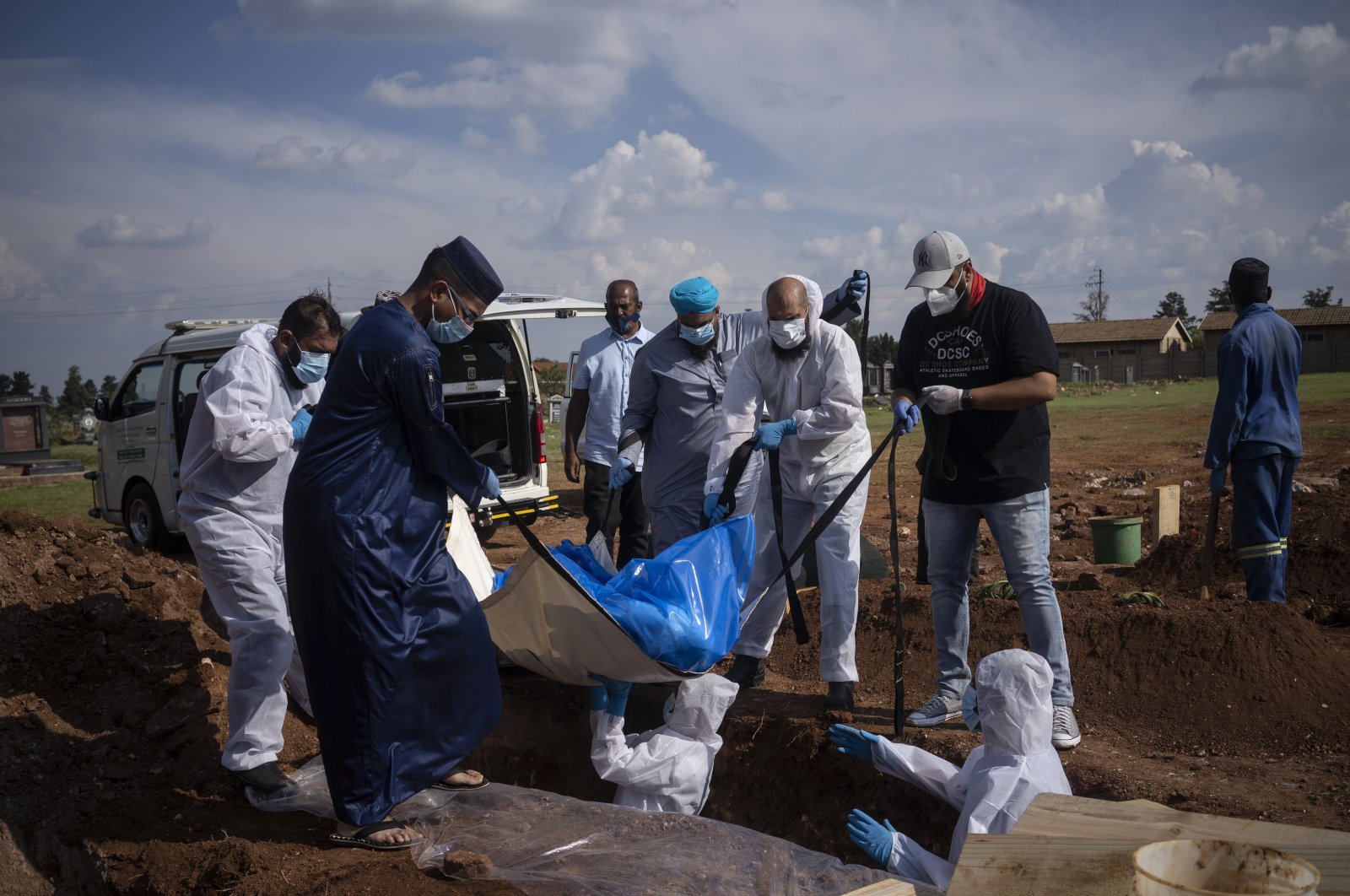 Family members and volunteers from the Saaberie Chishty Society lower the body of a COVID-19 victim into a grave at the Avalon cemetery in Lenasia, South Africa, Jan. 4, 2021. (AP Photo)
by ASSOCIATED PRESS Jan 26, 2021 1:18 pm
RECOMMENDED

A South African Muslim group safely and carefully buries people who died from the coronavirus with respect to its religion. Not even the full protective gear can mask the respect with which the men wash the body of a newly-deceased member of their Muslim community.

"To Allah we belong. Unto him shall we return. Ghusal Room 1,” reads a sign, referring to ghusal, the Muslim cleansing ritual, at the entrance to a room designated for victims of COVID-19.

The body is shrouded, placed in a coffin and buried in a nearby cemetery in Lenasia, a community of about 100,000 people on the outskirts of Johannesburg. For more than 30 years, the Saaberie Chishty ambulance service, funded by community donations, has responded to medical emergencies. Now the service has greatly expanded to offer oxygen and home care for those with mild COVID-19 cases, and transport to the hospital for those with more severe illnesses.

Confronted by a growing number of deaths, the organization now provides safe body preparation and burial. Its teams carry out many burials within 12 hours and all within the 24 hours required by Islamic tradition.

"When we saw the news stories from overseas, the death toll, mass burials, we asked ourselves, ‘If this disease hits our shores, will we be ready?’" said Aboobaker Sayed, 42, chairman of the Saaberie Chishty Society, named for two Muslim saints in India.

Around the world, the pandemic has challenged Muslim communities to bury their dead according to tradition.

In South Africa, the charity consulted medical experts on how to safely wash and prepare bodies for burials.

"We found that we could follow our rituals, but stay with science to do so safely,” Sayed said. "Volunteers were trained by our imams. It was a passing of the baton to the younger generation because they were not as much at risk as our older generation.”

The group also trained and shared its guidelines with Muslim communities in other parts of Johannesburg, Durban and Cape Town. Sayed said the cleansing rites also allow family members to see the departed.

"One of the worse things of COVID is that family members cannot say goodbye,” Sayed said. "But with the cleansing ritual, they can see the face of their loved one. It helps them to find closure. "I didn't realize this would help my own family, that it would help me,” he added.

Sayed's father and uncle died of COVID-19 in July, within 24 hours of each other. They were buried next to each other. "The rituals helped me a lot,” said Sayed, still emotional. His father was the president of the organization and his uncle was the chairman. Sayed is now chairman.

The society has buried 180 people who died from COVID-19, he said. The cemeteries have increased the number of graves dug so there is adequate space. The Saaberie Chishty ambulance service has also expanded to help those with mild symptoms at home. In collaboration with other organizations, it has 70 oxygen concentrators and doctors for in-home care. Amid South Africa's current resurgence of infections, the society's two ambulances attend to about 14 COVID-19 cases per day, about double the number during the country's first surge.

The ambulance service is offered to all residents of Lenasia and surrounding areas, including some parts of Soweto. Because most residents have limited incomes, the fees are waived for those who cannot afford to pay, Sayed said. South Africa, with 60 million people, has had 1.4 million confirmed cases of COVID-19, accounting for about 40% of all cases in the 54 countries of Africa, a continent of 1.3 billion people.

The resurgence of COVID-19 threatens to overwhelm many hospitals, health experts say. Responding to a call, paramedic Michael Makhethe drove an ambulance through Lenasia. "We’re having a patient suspected with COVID who is presenting a difficulty in breathing,” he said.

Soon he was checking the man's oxygen levels and urging him to breathe more deeply to get more oxygen into his lungs.

"You see it’s picking up ... you’re going to feel much better,” he said before taking him to the hospital. Makhethe is one of the 19 staff members of the ambulance service, which also has 20 volunteers. The burial service has four staff and about 80 volunteers.

"This is not just a job for me, it is a calling,” said Makhethe, 45. "Helping people, people in distress, that gives me meaning.”

Saaberie Chisty provides several other services, including delivering groceries and meals. "The downside of COVID, we all know, is the fear, the separation,” Sayed said. "But the challenge of this disease has increased unity in our community. People have stepped up and are helping each other more than they did before."