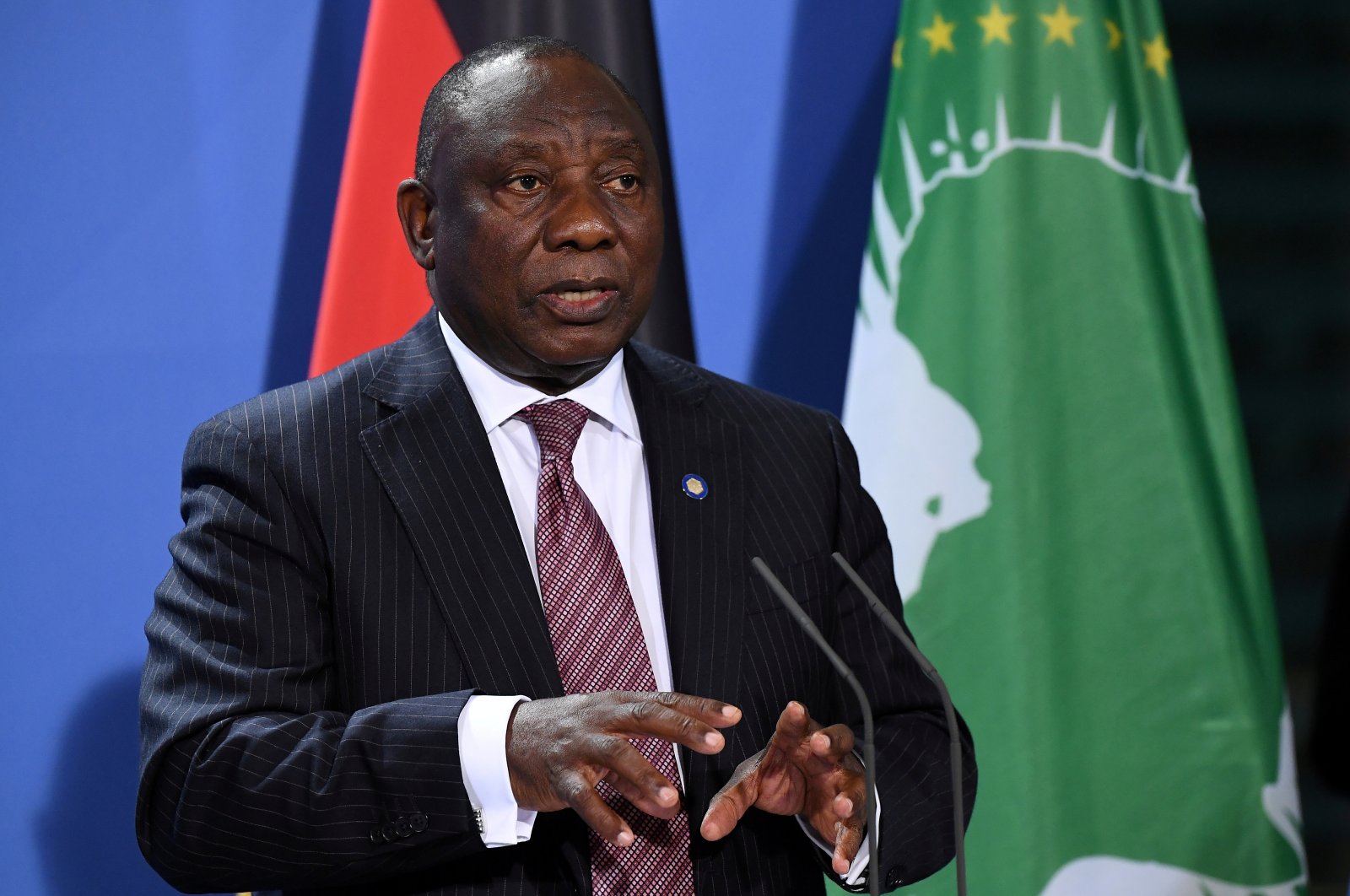 South African President Cyril Ramaphosa addresses a press conference after the G-20 Compact with Africa conference at the Chancellery in Berlin, Germany, Aug. 27, 2021. (Reuters Photo)
by DAILY SABAH WITH AGENCIES Nov 29, 2021 8:34 am
RECOMMENDED

South Africa claimed on Sunday that it was being punished for detecting the omicron variant, as more countries responded with travel bans to the worrying new coronavirus strain.

“We call upon all those countries that have imposed travel bans on our country and our southern African sister countries to immediately and urgently reverse their decisions,” Ramaphosa said in his first remarks since announcement of discovery of omicron. “The prohibition of travel is not informed by science,” he added.

“The only thing the prohibition on travel will do is to further damage the economies of the affected countries and undermine their ability to respond to, and recover from, the pandemic,” he noted. “These restrictions are unjustified and unfairly discriminate against our country and our southern African sister countries.”

Dozens of countries rushed on Friday to impose new restrictions, banning travelers from number of African states from entering their borders, fearing that new variant will spark more outbreaks. The "variant of concern" as it was named by the World Health Organization (WHO) is reportedly more transmissible and more dangerous than other strains.

"This latest round of travel bans is akin to punishing South Africa for its advanced genomic sequencing and the ability to detect new variants quicker," said a statement released by the Ministry of International Relations. "Excellent science should be applauded and not punished. The global community needs collaboration and partnerships in the management of the COVID-19 pandemic," the statement said, noting that new variants had been identified in other countries with no link to South Africa.

South African officials have entered discussions with countries that have adopted travel restrictions, hoping they will reconsider the decisions, the statement said. WHO's regional director for Africa, Matshidiso Moeti, also criticized the measures.

"With the omicron variant now detected in several regions of the world, putting in place travel bans that target Africa attacks global solidarity," she said. A statement from her office argued that while travel restrictions may play a role in slightly reducing the spread of COVID-19, they place a heavy burden on the targeted regions.

Since Nov. 26, 19 cases of the new variant had been confirmed in Botswana, he said on Sunday. Most of the cases, however, had been "imported" from outside the country. Cases have also been confirmed in countries including Britain, Germany, Belgium, Hong Kong, Israel and Canada. Japan announced Monday it will suspend entry of all foreign visitors from around the world.

“We are taking the step as an emergency precaution to prevent a worst-case scenario in Japan,” Prime Minister Fumio Kishida said. He said the measure will take effect Tuesday.

The decision means Japan will restore border controls that it eased earlier this month for short-term business visitors, foreign students and workers. Kishida urged people to continue with mask wearing and other basic anti-virus measures until further details of the new omicron variant are known.

On Sunday, Dutch Health Minister Hugo de Jonge said 13 people who traveled from South Africa to the Netherlands had been found to be carrying the omicron variant. Switzerland also reported a suspected case in a traveler who returned from South Africa a week ago, news agency SDA reported.

Fears are growing that the new variant could reduce the effectiveness of existing vaccines, although much remains unclear.

South Africa's medical association has said that people known to have the omicron variant have not become seriously ill, although many of them are young and therefore less likely to suffer serious illness.

"We take this omicron variant very seriously and we know that we are now in a race against time," von der Leyen said during a visit to Latvia, estimating that scientists and manufacturers would need two to three weeks to get a full picture of the variant's strength.

"The general line is: Hope for the best, prepare for the worst," von der Leyen said.

The U.S. plans to ban travel from South Africa and seven other southern African countries starting Monday. “It’s going to give us a period of time to enhance our preparedness,” the United States’ top infectious diseases expert, Dr. Anthony Fauci, said of the ban on ABC’s “This Week.”

Fauci said it will take approximately two more weeks to have more definitive information on the transmissibility, severity and other characteristics of omicron, according to The Associated Press (AP).

The African Center for Infectious Diseases (Africa CDC) meanwhile has said that it opposes travel bans, which it said had not significantly improved the situation. And the WHO has called for restraint when it comes to travel restrictions.

Nonetheless, the United States, Canada, Turkey, Saudi Arabia and EU member states have all clamped down on travel from southern Africa – and the list is growing.

Pakistan has banned travel from South Africa, Lesotho, Eswatini, Mozambique, Botswana and Namibia as well as Hong Kong, where two people are infected with the omicron strain.

Indonesia has banned entry to foreigners traveling from 11 African countries – South Africa, Botswana, Namibia, Zimbabwe, Lesotho, Mozambique, Eswatini, Malawi, Angola, Zambia and Nigeria – and Hong Kong. All international arrivals will also have to quarantine for seven days, up from three.

Australia has imposed a similar entry ban for non-citizens arriving from southern Africa. The health authorities there also confirmed the presence of two cases of the omicron strain on Sunday.

Israel, meanwhile, is to ban all foreigners from entering the country from Sunday evening, after a decision by its coronavirus cabinet late on Saturday, according to media reports. Morocco said on Sunday it would suspend all international flights into the country for two weeks due to the new variant.

In a bid to get South Africa's outbreak under control, Ramaphosa announced the government would begin consultations on making vaccination mandatory for certain activities and locations.

"We call upon all those countries that have imposed travel bans on our country and our southern African sister countries to urgently reverse their decisions and lift the ban they have imposed before any further damage is done to our economies and to the livelihoods of our people," he said.