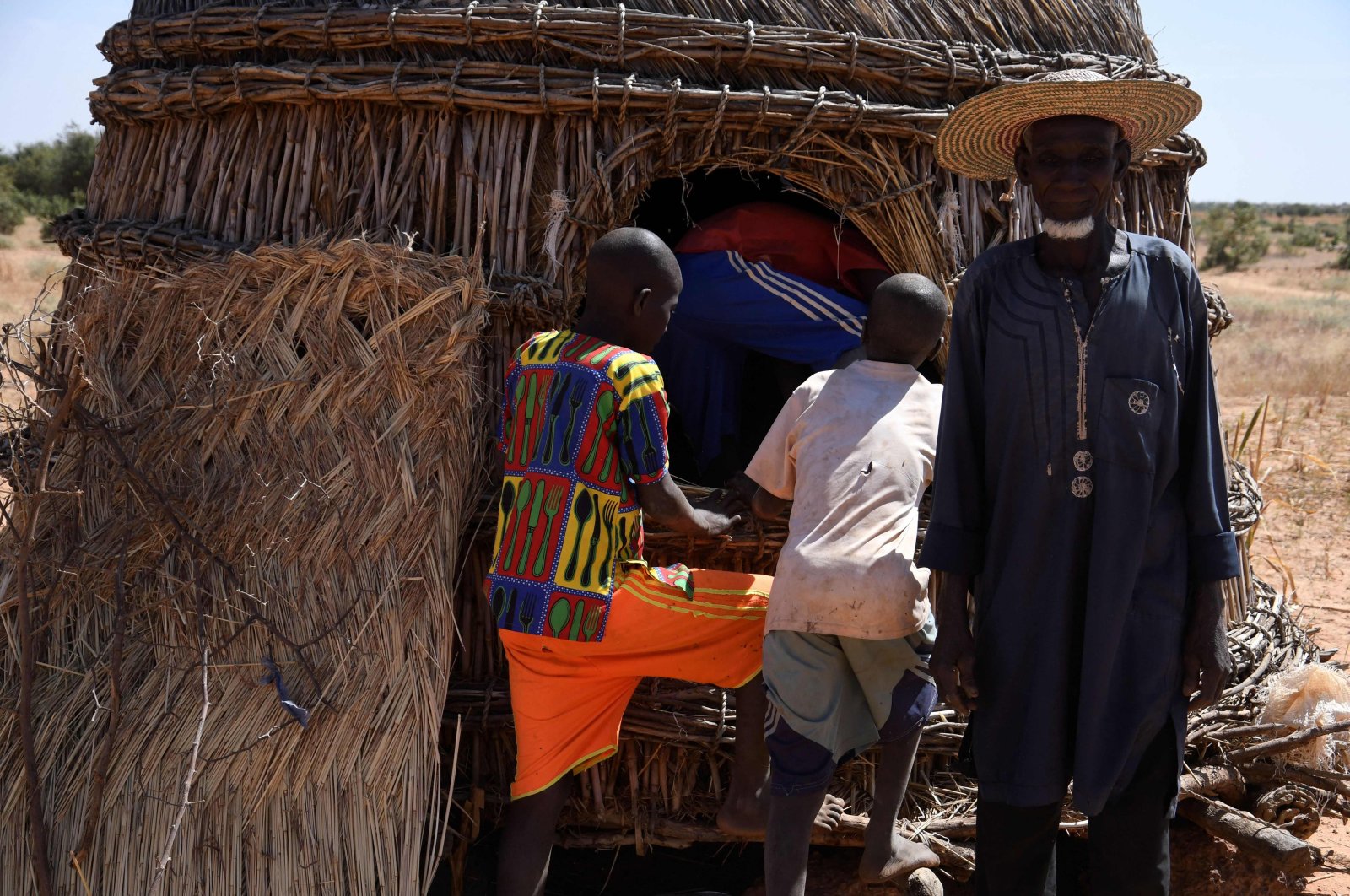 An elderly man stand in front of a storage building for millet in a village affected with an alimentary crisis, Ouallam area, Niger, on Nov. 13, 2021 (AFP Photo)
by French Press Agency - AFP Dec 03, 2021 10:08 am
RECOMMENDED

Few countries in the world struggle with as many burdens as Niger. The arid Sahel state is the world's poorest country according to the United Nation's Human Development Index.

It faces bloody extremist insurgencies on two of its borders. And now it is being stalked by hunger. Life is rarely easy for its farmers, but this year they have been struck by a terrible combination of factors.

Drought, insects and caterpillars ravaged harvests of millet, beans, corn and sorghum, the country's staple crops, and this was followed by torrential rains that wiped out newly sown fields.

Extreme weather multiplied the impact of extremist massacres that have forced thousands of families to abandon their fields and head to safety. Food shortages, higher prices and hunger are the result.

"Harvest time is over," said Abdou Hamani, a farmer in his 70s, who lives in a hamlet near the town of Simiri in Tillaberi, a western region bearing the brunt of the dual food and security crisis.

Dressed in faded grey robes, with a white beard and wearing a straw hat, Hamani grimaced as he looked at the cereal storehouses at the back of his farmhouse.

"My harvest was so bad that we ate all of it in about 10 days," he said. In years when "the harvests were good, we had enough to eat for at least eight months," his neighbor Ali observed.

According to figures recently cited by President Mohamed Bazoum, out of the country's 12,474 "agricultural villages," 6,430 are suffering a shortfall of at least 50% in cereal production. Out of Niger's fast-growing population of around 24 million, 8.8 million lack food, compared with 3.6 million in 2020, of which 2.5 million suffer severe food shortage.

The U.N.'s Office for the Coordination of Humanitarian Affairs (OCHA) says areas targeted by extremists have seen rises in food prices, adding to Niger's nutrition problem.

The mayor of Simiri, Moussa Adamou, said he had seen an outpouring of hungry rural residents heading for the towns in the past few weeks "because of this famine," their vehicles laden with people and possessions.

"If nothing is done quickly, the devastation will be complete. 50% to 60% of the schools will close, because the parents are leaving with their children," he warned.

Agence France-Presse (AFP) spoke to a farmer named Seydou Haoudji, who had traveled 80 kilometers (50 miles) on a donkey cart from the village of Zontondi, near Simiri, in order to sell hay in the capital Niamey.

"I made a bit of money, I bought a sack of rice, a little salt, some spices," said Haoudji. a father of five. He blamed the drought for "spoiling everything."

The authorities are hoping to muster 160.3 billion CFA francs ($280 million, 244 million euros) in emergency help. It will focus on areas where farmers have been unable to grow crops because of "terrorist attacks."

Food assistance will be free or low-cost. The government has also pledged to help provide irrigation to enable more than 4.7 million people in rural areas to grow crops other than cereals. Cattle-raising, another mainstay in Niger's fragile, agriculture-based economy, has also been hit by a 50% fall in the production of feedstock.

The prolonged drought reduced vegetation to tinder, causing nearly 500,000 hectares (1.25 million acres) of grassland to be engulfed by wildfires this year.

More than 64,000 tons of fodder were consumed by flames in the western region of Abala alone, "enough to feed nearly 19,000 fully-grown cattle for six months," Environment Minister Garama Saratou Rabiou has said.