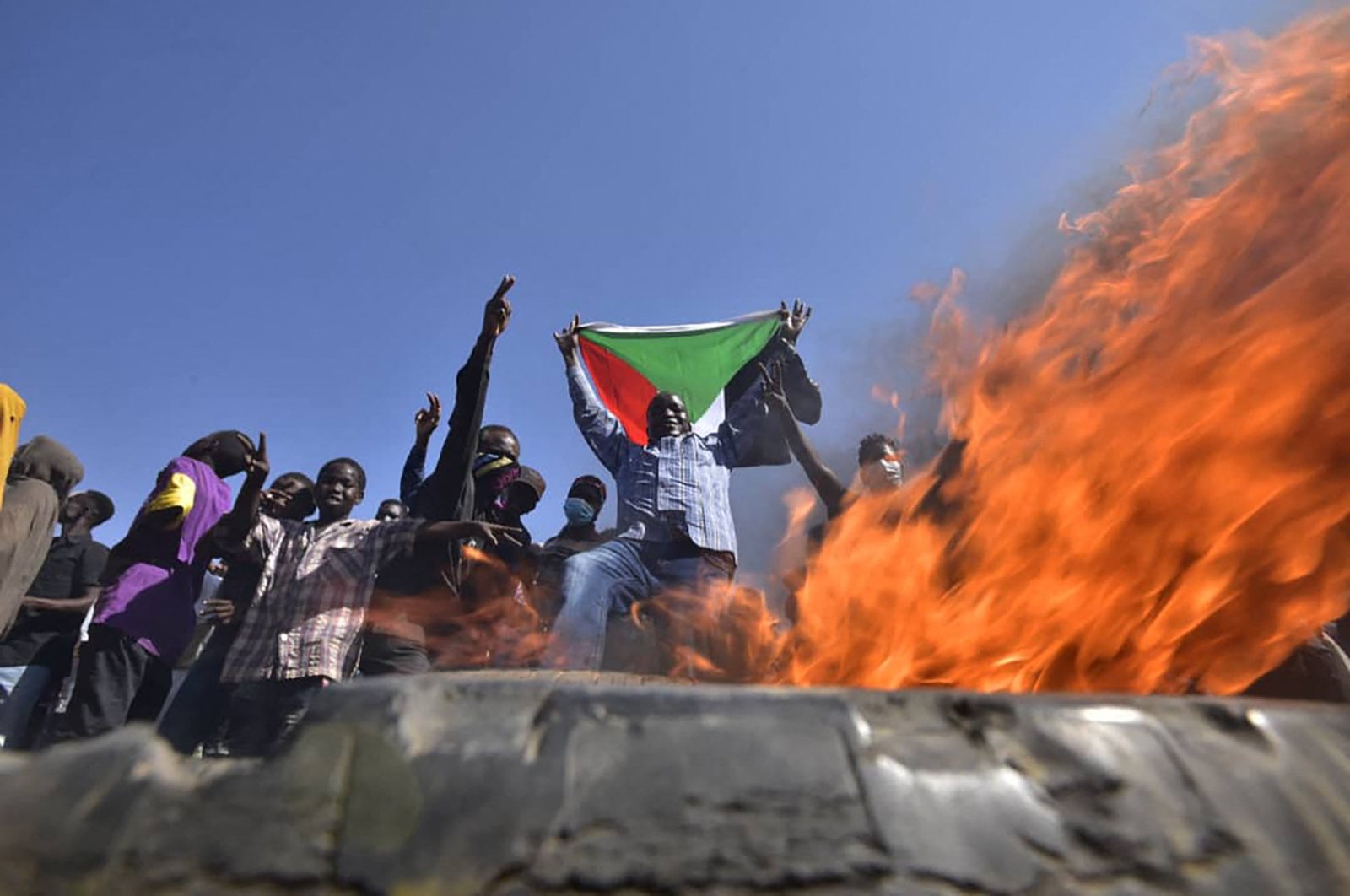 A man holds a Sudanese national flag before flames at a barricade as people protest against the military coup, east of the capital Khartoum, Sudan, Nov. 13, 2021. (AFP Photo)
by ASSOCIATED PRESS Nov 14, 2021 4:51 pm
RECOMMENDED

The chief of Al-Jazeera's Sudan bureau has been detained by the country's security forces, the Qatar-based news network said Sunday, a day after protests against last month's military coup turned violent.

The network said on Twitter that Sudanese forces raided the home of El Musalmi El Kabbashi and detained him.

The Sudan Doctors Committee said a 15-year-old protester died Sunday of gunshot wounds to his stomach and thigh, raising the death toll to six people.

In a later statement, Al-Jazeera said El Kabbashi had been arrested at his home in Khartoum, the Sudanese capital. The broadcaster said it held the Sudanese military responsible for his safety.

“Al-Jazeera condemns in the strongest terms the reprehensible actions of the military and calls on the authorities to release El Kabbashi immediately and to allow its journalists to operate unhindered, free to practice their profession without fear or intimidation,” the channel said.

Sudanese officials could not be immediately reached for comment.

Thousands of pro-democracy protesters took to the streets across Sudan on Saturday to rally against the military coup last month. The takeover has drawn international criticism and massive protests in the streets of the capital Khartoum and elsewhere in the country.

The killings Saturday took place in Khartoum and its twin city of Omdurman. The dead included four people killed by gunshots and one who died from being hit by a tear gas canister. The 15-year-old who died of his wounds Sunday brought the number of fatalities to six, the doctors committee said. Several other protesters were wounded, including from gunshots, it noted.

That brought the tally since the Oct. 26 coup to at least 21 protesters dead, according to the medical group.

Saturday's rallies, called by the pro-democracy movement, came two days after coup leader Gen. Abdel-Fattah al-Burhan reappointed himself head of the Sovereign Council, Sudan's interim governing body. Thursday’s move angered the pro-democracy alliance and frustrated the United States and other countries that have urged the generals to reverse their coup.

The newly appointed body held its first meeting, chaired by Gen. al-Burhan Sunday in Khartoum, the council said on its Facebook page.

The pro-democracy movement condemned “the excessive use of force” against the protesters Saturday. The Forces for the Declaration of Freedom and Change said their struggle to establish a full civilian government “will not stop” and called for mass demonstrations on Wednesday.

The Sudanese military seized power on Oct. 25, dissolving the transitional government and arresting dozens of officials and politicians. The takeover upended a fragile planned transition to democratic rule, more than two years after a popular uprising forced the removal of longtime autocrat Omar al-Bashir and his government.