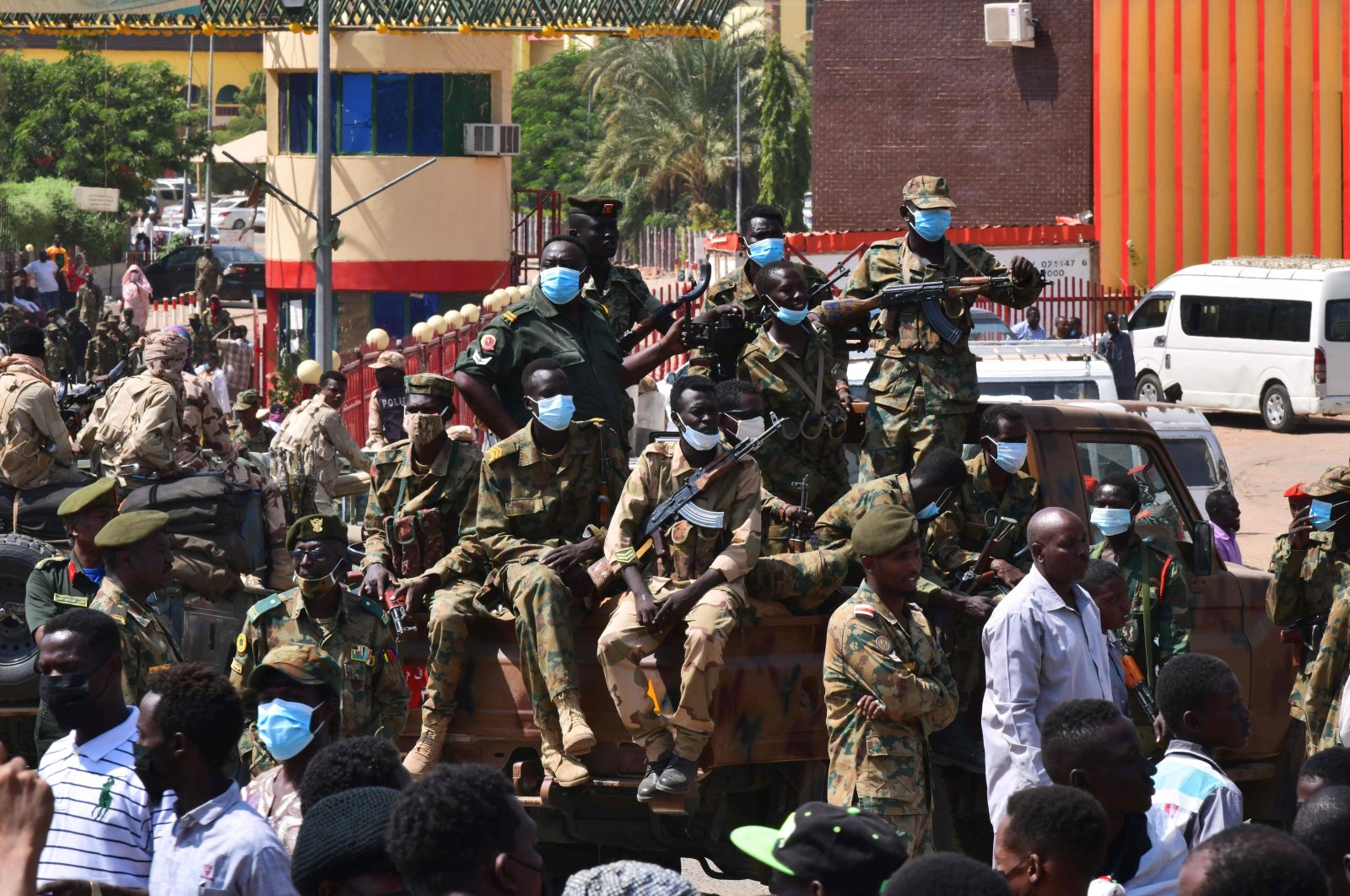 Sudanese security forces keep watch as they protect a military hospital and government offices during protests against a military coup, Omdurman, Sudan, Oct. 25, 2021. (AFP Photo)
by DAILY SABAH WITH AGENCIES Oct 26, 2021 10:25 am
RECOMMENDED

Defiant protesters thundered through the streets of Sudan on Tuesday demonstrating against a military coup that the U.N. Security Council is expected to later meet to discuss, as international condemnation of the country's security forces mounts.

"Returning to the past is not an option," chanted the crowds, who remained outside despite soldiers opening fire and reportedly killing at least seven people. Plumes of smoke rose over Khartoum from tyres set ablaze by protesters on Tuesday. Roads were blocked, shops were shut and mosque loudspeakers blared calls for a general strike in Sudan.

On Monday, soldiers detained Prime Minister Abdalla Hamdok, ministers in his government and civilian members of the ruling council, who have been heading a transition to full civilian rule following the April 2019 overthrow of Omar al-Bashir.

The subsequent declaration of a state of emergency and dissolution of the government provoked an immediate international backlash, with the United States, a key backer of Sudan's transition process, strongly condemning the military's actions and suspending millions of dollars in aid.

The U.N. demanded Hamdok's "immediate release," while diplomats in New York told Agence France-Presse (AFP) the Security Council was expected to meet to discuss the crisis on Tuesday.

Announcing the state of emergency, Gen. Abdel-Fattah al-Burhan – the head of the army and chair of the country's ruling transitional body, the Sovereign Council – said the army had taken the actions it had "to rectify the revolution's course." In a television statement on Tuesday, al-Burhan said the decision to oust the government of Hamdok was taken in order to avoid civil war, accusing political forces of incitement against the armed forces. Al-Burhan also said he was keeping Hamdok at his own house. He told a news conference that Hamdok was safe and kept away "for his own safety."

“The affairs of the country will be run by an independent technocrat government where people of Sudan from all walks of life will be represented,” he said, according to Doha-based media outlet Al-Jazeera. He also issued on Tuesday a decision to dissolve the committees managing the country's trade unions, Sky News Arabia and Al-Hadath TV channels reported.

Internet services were cut across the country and roads into Khartoum were shut, before soldiers stormed the headquarters of the state broadcaster in the capital's twin city of Omdurman. All telecommunications were interrupted, the Saudi-owned Dubai-based Al-Hadath said on Tuesday. There was no official confirmation of the communications blackout.

"Civilian rule is the people's choice," chanted the demonstrators, who waved flags and used tires to create burning barricades. The information ministry said soldiers "fired live bullets on protesters... outside the army headquarters". At least seven demonstrators were killed and about 80 people wounded, according to the independent Central Committee of Sudan Doctors (CCSD).

Meanwhile, detained Hamdok issued a statement, saying that the moves by the military represent a "complete coup d'etat." He called on the public to take to the streets to protest the military takeover. He explained that the army had abducted him and his wife from their home in Khartoum and had moved them to an unknown location. The Sudan information ministry, still loyal to Hamdok, has called the takeover a crime and said Hamdok is still the legitimate leader, as Reuters reported.

"The United States strongly condemns the actions of the Sudanese military forces," said Blinken, calling for the restoration of the civilian-led transitional government. State Department spokesperson Ned Price said U.S. officials had not been able to contact the detained prime minister.

The United States has suspended $700 million in aid. A troika of countries previously involved in mediating Sudanese conflicts – the U.S., U.K. and Norway – said that "the actions of the military represent a betrayal of the revolution, the transition, and the legitimate requests of the Sudanese people for peace, justice and economic development."

"It would be disastrous if Sudan goes backwards after finally bringing an end to decades of repressive dictatorship," she was quoted as saying by AFP. The European Union and Arab League also expressed concern while the African Union (AU) suspended Sudan’s membership following the military coup.

Al-Bashir, who ruled Sudan with an iron fist for three decades, is in jail in Khartoum following a corruption conviction. The International Criminal Court (ICC) issued a warrant for al-Bashir on charges of genocide over the civil war in Darfur.

A 2019 power-sharing deal after his fall saw Sudan ruled by the Sovereign Council of civilian and military representatives tasked with overseeing a transition to a full civilian government. Jonas Horner from the International Crisis Group (ICG) think tank called the coup an "existential moment for both sides".

"This kind of intervention... really puts autocracy back on the menu," he said.

In recent weeks, the cracks in the leadership had grown wide. Hamdok had previously described splits in the transitional government as the "worst and most dangerous crisis" facing the transition. In recent days, two factions of the movement that spearheaded demonstrations against al-Bashir have protested on opposite sides of the debate – one group calling for military rule, the other for a full handover of power. Tensions have long simmered within the movement, known as Forces for Freedom and Change (FFC), but divisions ratcheted up after what the government said was a failed coup on Sept. 21 this year.

One FFC leader warned of a "creeping coup" at the weekend during a news conference in Khartoum that was attacked by a mob.

On Monday, the mainstream FFC appealed for nationwide "civil disobedience." "We will not accept military rule, and we are ready to give our lives for the democratic transition in Sudan," said one demonstrator, Haitham Mohamed.

"We will not leave the streets until the civilian government is back," Sawsan Bashir, another protester, told AFP.