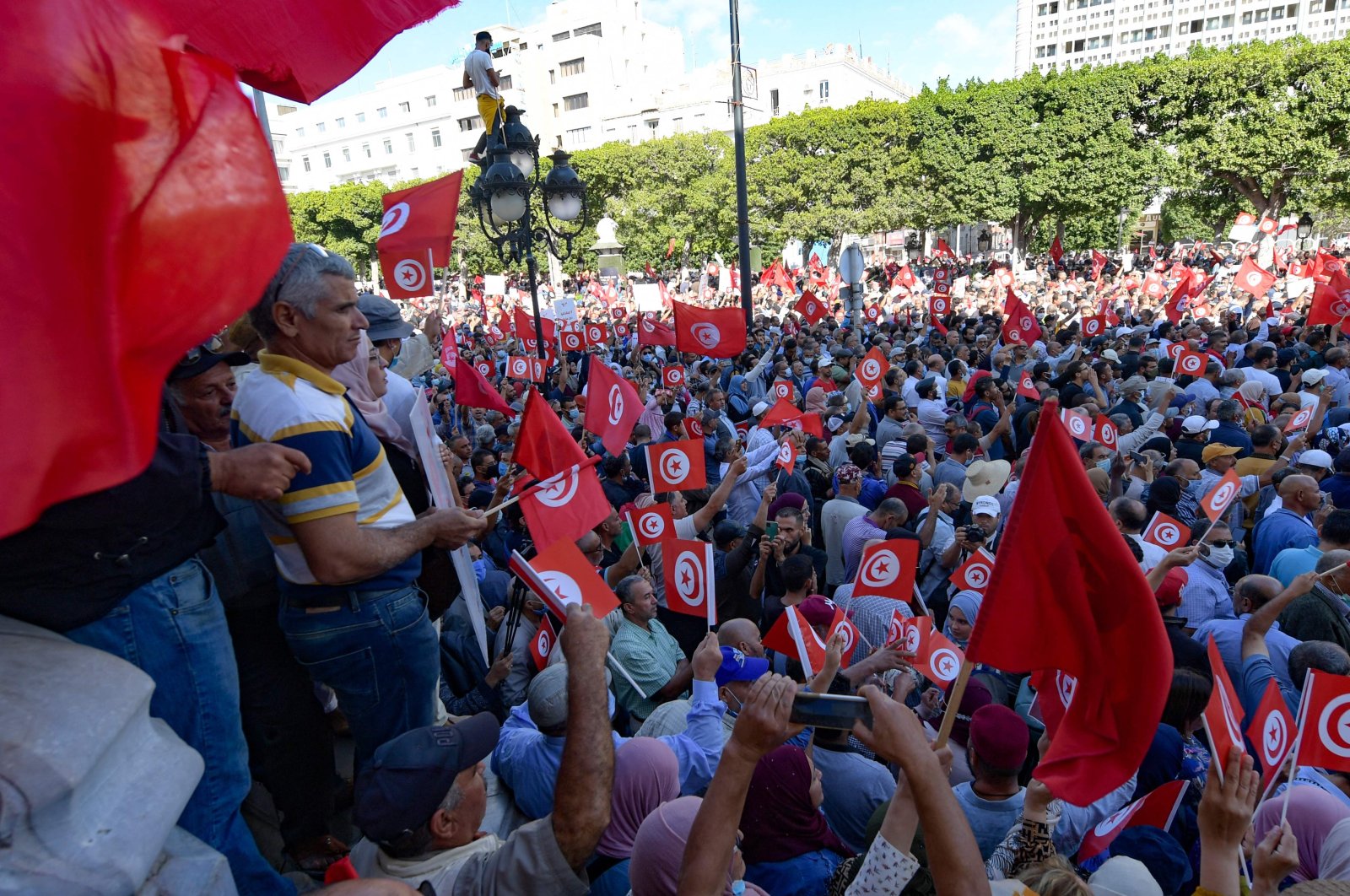 Tunisians raise national flags during a rally against their president along the Habib Bourguiba avenue in the capital Tunis, Oct. 10, 2021. (AFP Photo)
by REUTERS
Oct 10, 2021 1:35 pm

Thousands of Tunisians opposing President Kais Saied's seizure of almost total power protested in the capital on Sunday as heavy police presence tried to stop them advancing along the central Habib Bourguiba Avenue.

A week after demonstrators rallied in support of Saied, the growing number of protesters on each side raises the possibility of Tunisia's political divisions spiraling into street confrontations between the two camps.

"We will not accept the coup. Enough is enough," said Yassin ben Amor, a protester.

Police blocked the march as some demonstrators threw plastic bottles.

Saied dismissed the prime minister, suspended parliament and assumed executive authority in July in moves his oppositions call a coup.

Last month he brushed aside much of the constitution, which he said he would appoint a committee to amend, adding that he could rule by decree.

His intervention has cast into doubt the democratic gains made by Tunisians during a 2011 revolution that triggered the Arab Spring uprisings.

He has appointed Najla Bouden Romdhane as prime minister, but she has not yet named a government, an important precursor to any efforts to resolve Tunisia's looming crisis in public finances, though Saied said Saturday she would do soon.

Saied said he would initiate a dialogue with the Tunisian people and youth representatives, particularly from the regions, over the future during a meeting on Saturday with the interim interior minister, Ridha Gharsalaoui.

Interior Ministry spokesman Khaled Hayouni said the police would deal with protesters from both sides in the same way.

"The Tunisian police is a republican police and it does not intervene in any political side," he said.

Any dialogue that does not include major political parties or other established elements of civil society, such as the powerful labor union, would likely prompt more open opposition to his moves.

Western donors, needed to avert a collapse in Tunisia's public finances, have called for an inclusive process to end the crisis period, along with a clear timeline. With the political maneuvering over Tunisia's future moving very slowly, Saied has pointed to the street mobilization to support his position.

Last week more than 8,000 demonstrators rallied in Tunis in support of Saied, Reuters journalists and the state news agency said, while the Interior Ministry said about 5,000 had attended. The next day, Saied said 1.8 million people had come out to back him.