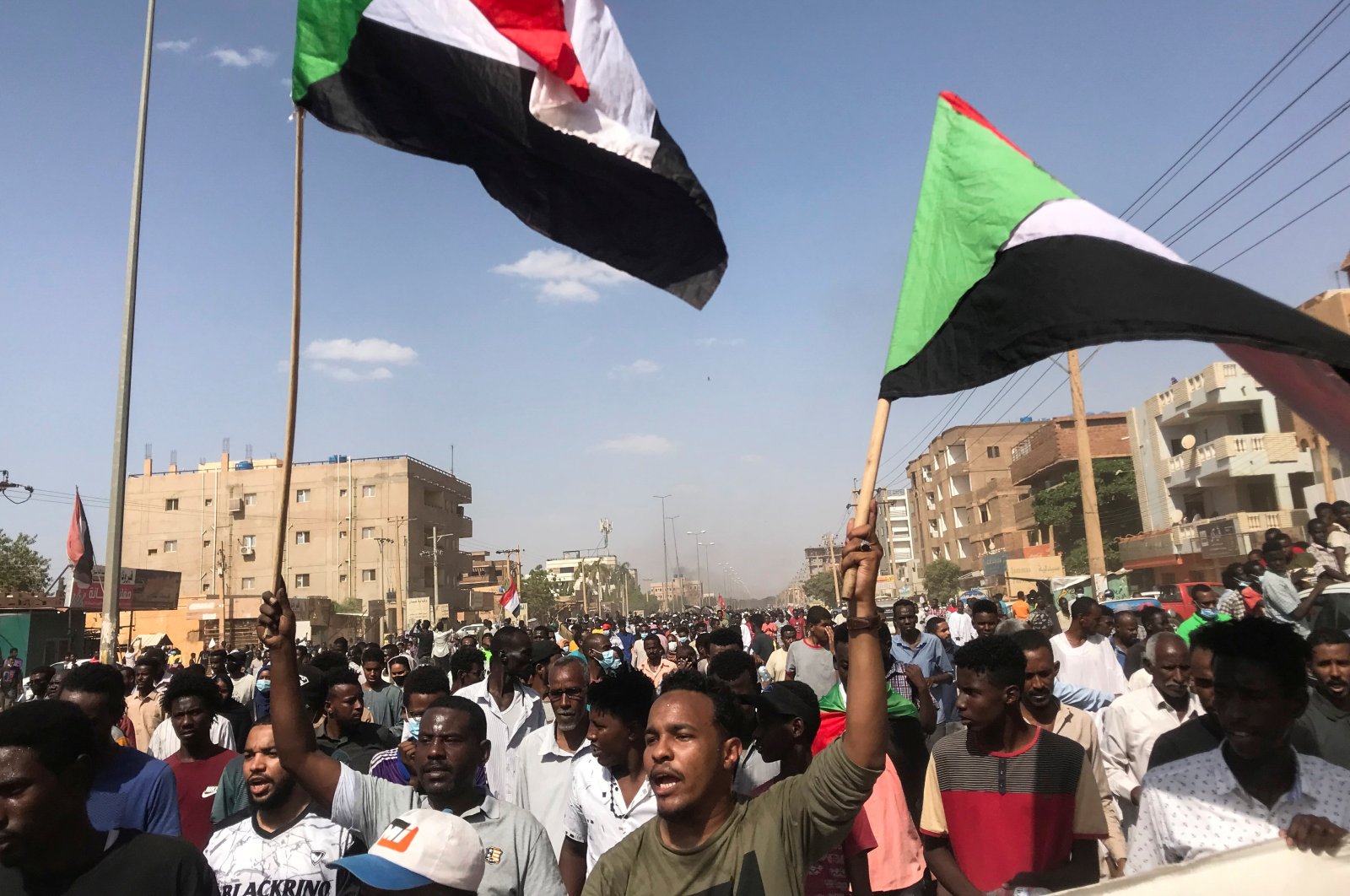 Protesters hold flags and chant slogans as they march against the Sudanese military's recent seizure of power and ousting of the civilian government, in the capital Khartoum, Sudan, Oct. 30, 2021. (Reuters Photo)
by French Press Agency - AFP Nov 05, 2021 10:05 pm
RECOMMENDED

The United Nations' top human rights body condemned Friday the military coup in Sudan as it appointed an expert to monitor alleged rights violations in its aftermath, while calling on the military leaders to immediately "step back" and let the nation return to civilian rule.

The 47-member council adopted by consensus a resolution calling for the "immediate restoration" of the civilian-led government.

Friday's resolution, presented by Britain, Germany, Norway and the United States, condemned the "arbitrary detention" of Prime Minister Abdalla Hamdok and others, demanding their immediate release.

In her opening statement to the council, U.N. rights chief Michelle Bachelet described the situation as "deeply disturbing," saying most detainees were being held "incommunicado, with no access to lawyers or their relatives."

Thursday evening, Sudan TV said Burhan had ordered the release of four government ministers, although it was not immediately clear when they would be released.

"This disproportionate and deadly use of force ... must end immediately," she said.

The rights chief condemned an internet shutdown and a communications blackout in Sudan, with only media controlled by the military continuing broadcasting.

The coup betrayed Sudan's "courageous and inspiring revolution of 2019," Bachelet said, adding that it was "urgent to restore civilian rule."

A long line of countries echoed her concerns, with British Ambassador Simon Manley decrying the "dramatic deterioration in the human rights situation" in Sudan since the coup.

Some countries, including Russia, China and Venezuela, meanwhile took the floor to slam the special session as an "unacceptable" interference in Sudan's internal affairs.

The three said they disassociated themselves from Friday's consensus, but did not request a vote on the text.

It would have been customary for Sudan to address the council Friday, but that was abandoned amid confusion over who represents the crisis-hit country.

During her address, Bachelet urged the council to take "appropriate action" to closely monitor human rights developments in the country.

But following significant diplomatic wrangling, Friday's resolution was weakened, with the final version dropping a request for the appointment of a "special rapporteur," or independent rights expert, to follow developments.

Such an expert had previously kept tabs on Sudan, but the council decided last year to discontinue the mandate.

Instead of reinstituting a special rapporteur, the council Friday called for a "designated expert" within Bachelet's office to be tasked with following the situation.

It also called for the U.N. rights chief to update the council on developments during the next regular session in March.