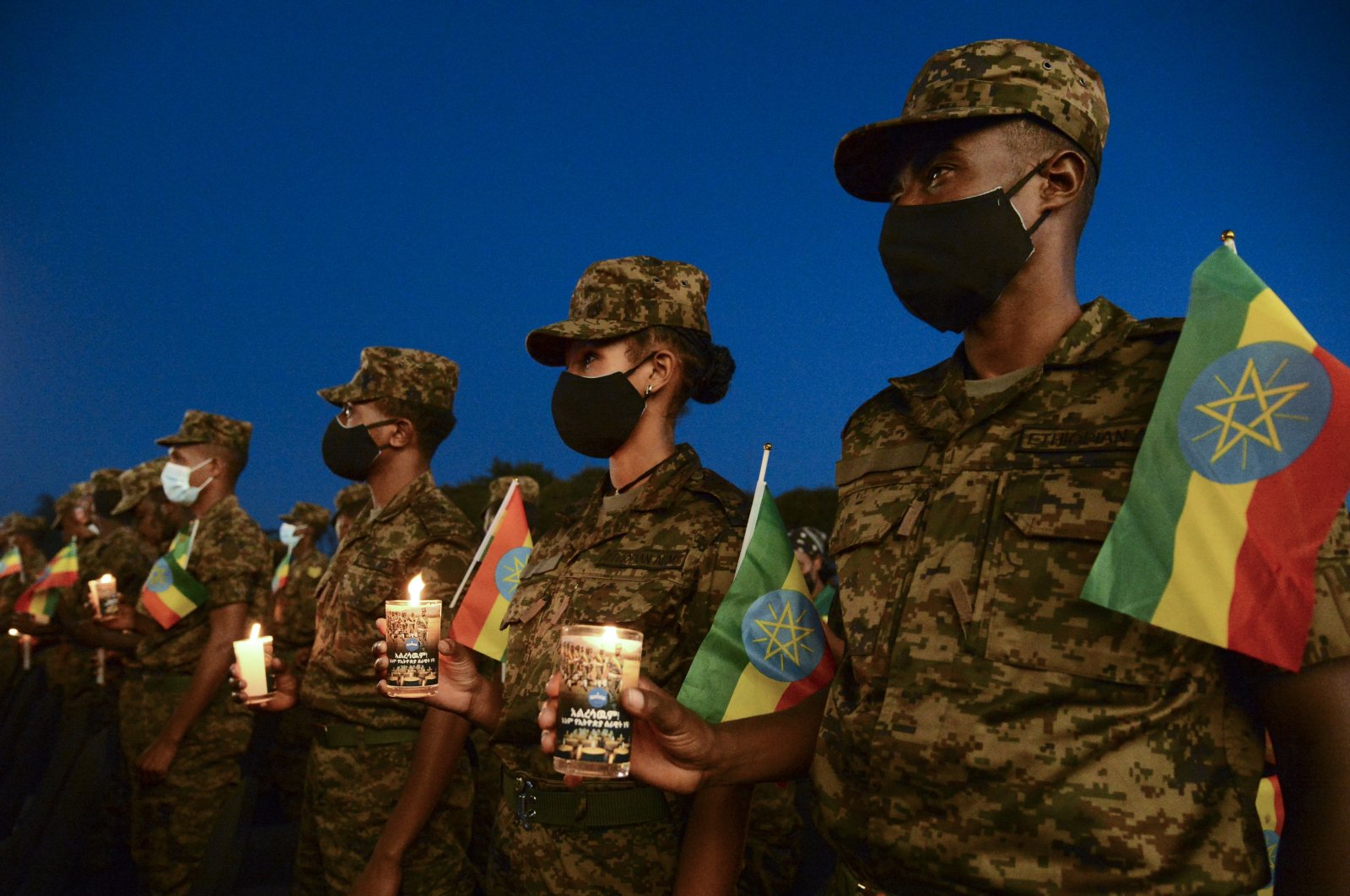 Current and former Ethiopian military personnel and the public commemorate federal soldiers killed by forces loyal to the Tigray People's Liberation Front (TPLF) at the start of the conflict one year ago, at a candlelit event outside the city administration in Addis Ababa, Ethiopia, Nov. 3, 2021. (AP Photo)
by French Press Agency - AFP Nov 06, 2021 6:49 pm
RECOMMENDED

The U.S. ordered all its nonessential diplomats and their families to depart from Ethiopia and urged all its citizens to leave the country as Prime Minister Abiy Ahmed called on civilians to take up arms to block the advance of the rebel Tigray People's Liberation Front (TPLF).

Nine rebel groups said on Friday they would join forces in an alliance built around the TPLF, which has been locked in a yearlong war that has killed thousands and pushed many more into famine-like conditions.

Abiy, winner of the 2019 Nobel Peace Prize, sent troops into Tigray in November last year to topple the TPLF, accusing them of attacking military bases.

The U.S. State Department said it had "ordered the departure of non-emergency US government employees and their family members" on Friday, and it was also urging all other U.S. nationals to leave.

Saudi Arabia, Norway, Sweden, Denmark and other countries have also urged their people to leave Ethiopia in the past week.

TPLF representative Berhane Gebre-Christos said on Friday the alliance was aiming to "remove the regime" as he signed the nine-party agreement in Washington.

Abiy then tweeted on Saturday that "there are sacrifices to be made, but those sacrifices will salvage Ethiopia."

"We have seen the tests and obstacles and it made us stronger," he said.

The government's communication service said on Twitter: "For us, Ethiopians, dying for our sovereignty, unity and identity, is an honour. There is no Ethiopianism without sacrifice."

Last weekend, the TPLF said it had taken two strategic cities in Amhara region, where its fighters advanced after retaking their Tigray bastion in June.

It said on Wednesday it had reached the town of Kemissie in Amhara, 325 kilometers (200 miles) northeast of the capital.

The TPLF added it was running "joint operations" with another rebel group, the Oromo Liberation Army, which predicted Addis Ababa could fall in a matter of weeks.

The Ethiopian government, which on Tuesday declared a nationwide emergency, has denied any major rebel advance or threat on the capital, vowing to press on to victory in "an existential war."

Abiy's spokesperson Billene Seyoum on Friday accused the rebels of spinning "an alarmist narrative that is creating much tension among different communities, including the international community."

"This information warfare and this propaganda that they have been propagating is giving a false sense of insecurity," she added.

The U.N. Security Council on Friday called for a cease-fire but neither side has yet responded.

Abiy declared a victory in the conflict shortly after sending in the troops.

But by late June the rebels had retaken most of Tigray and expanded into neighboring Afar and Amhara.

The conflict has also exacerbated ethnic rivalries, in particular on social media where calls for war and hatred have been rife.

Twitter announced on Saturday that it had temporarily disabled its "trends" section – which groups the most viral tweets on a subject – for Ethiopia.

The social media giant said it was "focused on protecting the safety of the conversation on Twitter," adding that "inciting violence or dehumanising people is against our rules."

Facebook's parent company Meta said Wednesday that it had deleted a post by Abiy that called for Ethiopians to "bury" the rebels.

The authorities say they are only targeting TPLF supporters.