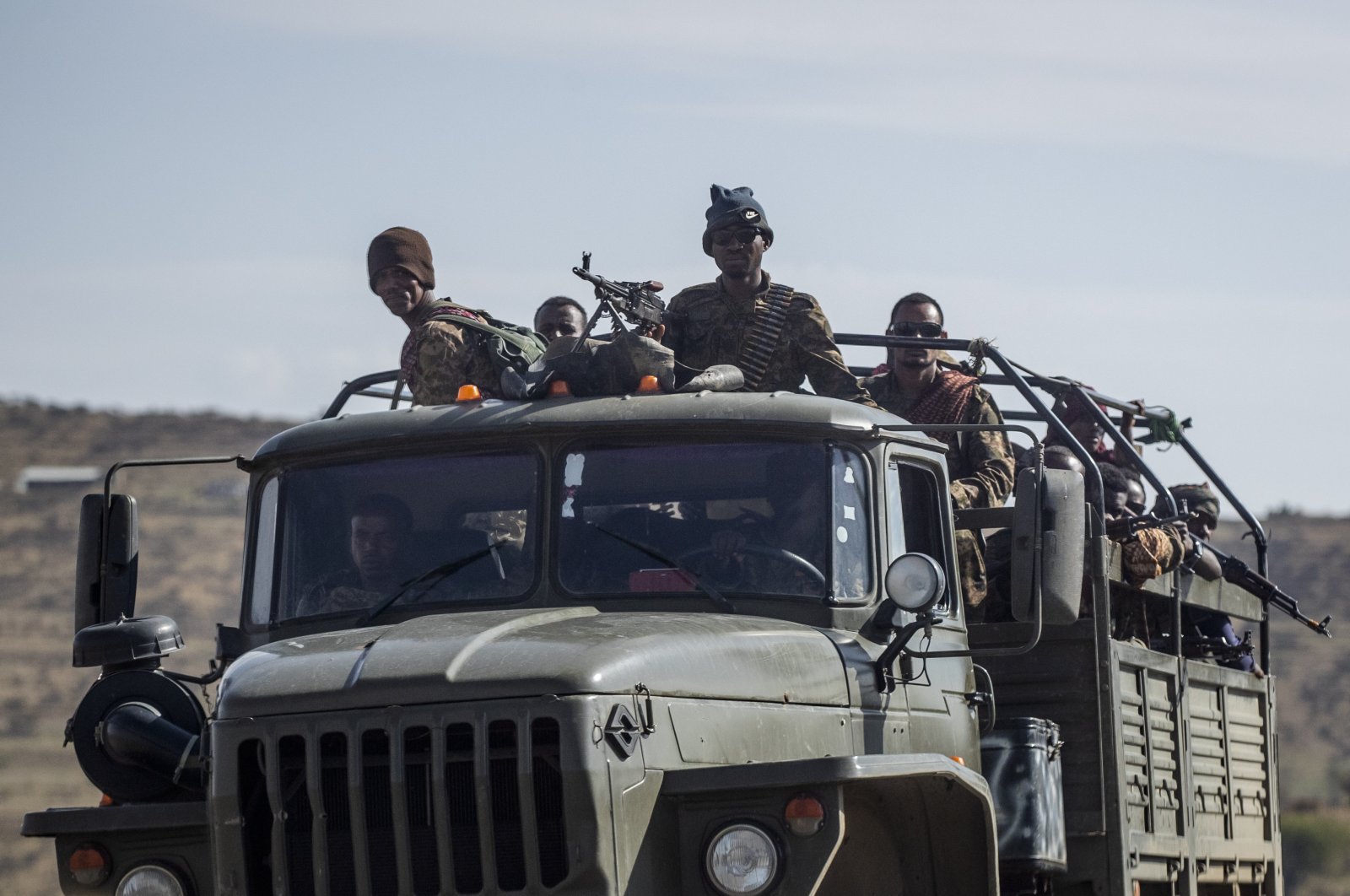 Ethiopian government soldiers ride in the back of a truck on a road near Agula, north of Mekele, in the Tigray region of northern Ethiopia on May 8, 2021. (AP Photo)
by Yohannes Gedamu
Aug 11, 2021 12:05 am

Contrary to the Ethiopian government’s peace overtures and positive actions, remnants of the TPLF failed to assume equal responsibility to avert a looming humanitarian disaster and took the fight to adjacent Amhara and Afar regions

Since the war in Tigray started following Tigray People’s Liberation Front (TPLF)’s sudden attack directed at the Northern Command of Ethiopia’s National Defense Forces (ENDF) in early Nov. 2020, one major concern that the international community peevishly raised was the need for free movement of humanitarian aid agencies and journalists inside the Tigray region.

The concern was addressed after ENDF launched the country’s law enforcement operation in the region and defeated the TPLF rebels and when the reality on the ground was perceived to be conducive for relatively free movement of international media and aid agencies.

Unfortunately, the rebels had already started an insurgency by utilizing guerrilla tactics exploiting their own constituency as geographic and human shields, which continued to exacerbate the humanitarian situation in the region.

At the same time, thanks to the billions TPLF plundered from the country for almost 30 years, it successfully used its advocacy and lobbying networks to intensify its public relations attacks against the government of Ethiopia.

To convince the international community with its false allegations against the federal government and ENDF, the TPLF continued to attack aid convoys, killing logistics operators including drivers and aid workers and increased closure of important road infrastructures by destroying bridges and blocking roads. While doing so, TPLF never shied away from falsely blaming ENDF for all these problems.

As if it were not enough to understand the true colors of the TPLF rebels by taking the way they destroyed the international airport in Axum and the destruction in Tigray in the first phase of the conflict as an example, most of the biased international community continued to amplify the TPLF’s talking points in its persistent accusations against the federal government of Ethiopia.

Inopportunely, the recent effort by the federal government to guarantee much-needed help to its Tigrayan citizens by investing more than 100 billion Ethiopian birr ($2.2 billion) was not even given any credit.

For the government of Ethiopia, ensuring its Tigrayan citizens receive what they deserve most, i.e., humanitarian aid, is an important priority. Therefore, after it reevaluated its law enforcement operation, the prolonged destruction it caused, the suffering of citizens there and the looming food shortage, it declared a unilateral cease-fire and withdrew its forces from Tigray.

This was a sensible gesture decided and implemented with the hope of easing the tension, reducing human suffering and creating a space for negotiation, reconciliation and rehabilitation.

Contrary to the federal government’s peace overtures and positive actions, however, remnants of the TPLF failed to assume an equal responsibility to avert a looming humanitarian disaster, instead negating the humanitarian cause by taking the fight to adjacent Amhara and Afar regions of Ethiopia.

To make matters worse, even after such a decision by the government with a primary goal of avoiding a missed farming season for Tigrayan farmers, TPLF utilized the cease-fire to regroup and recruit child soldiers, thereby adding to the unspeakable suffering of Tigrayan Ethiopians while claiming firsthand to protect their interests.

According to public information from federal authorities, the government of Ethiopia left behind over 400,000 sacks of grain before withdrawing its forces from the Tigray region. Hundreds of trucks of humanitarian aid were also delivered.

Even while TPLF continued its war of aggression, the government of Ethiopia gave permission to aid agencies to fly from Addis Ababa airport to Mekele so that they continue to deliver food and medical aid undeterred. For instance, the World Food Program was providing food aid in Tigray while the U.S. and EU were saying that there was no unfettered access. Sadly, this was clearly demonstrated when some independent media agencies reported TPLF leaders being transported with WFP trucks to Mekele.

Furthermore, TPLF is blocking new food aid convoys from crossing into Tigray through its new aggressions to escalate the suffering of a population that it claims to represent. Sadly, whatever TPLF does goes unnoticed by the international media. As a result, its aggressions against the Ethiopian state at large, its killing of Amhara and Afar Ethiopians and the displacement of hundreds of thousands of citizens due to its recent aggressions have all continued with impunity.

Currently, it is critical to reiterate that TPLF is further hindering humanitarian aid by declaring war on different parts of Ethiopia such as the raging conflict in Afar region, which it hopes would secure it full encroachment of the Djibouti corridor and destabilize landlocked Ethiopia’s access to the sea.

By further blowing up the bridge over Tekeze river in South-West Tigray and declaring war on Amhara so as to invade and control the western corridor, TPLF’s primary goal has now become to gain access to Sudan so that it can receive armament support from anti-Ethiopian regional forces and import additional Tigrayan rebels that have received military training in a restive part of eastern Sudan.

Regrettably, it is also critical to note that most of these newly trained rebels based in Sudan were once considered refugees who escaped the war in Tigray, which again clearly shows the double standard used against Ethiopia by the international community.

Why does TPLF seek control?

What the international community and Ethiopians at large must question is why access to the western corridor, the long border Ethiopia shares with Sudan, is critical for TPLF rebels.

The answer is very straightforward. Time and again, the TPLF has showed that its reasoning for ignoring the government’s humanitarian cease-fire and its continued aggression is not because of confidence emanating from its military capability nor because it has the resources that it needs to defeat Ethiopia and its armies.

But the rebels’ main strategy is to cause havoc across the entire Ethiopian state by using the long border with Sudan and broadening the geographical areas where the war is taking place.

By extension, as it is already apparent from the rebel fighters organized in small numbers that are creating terror networks across Ethiopia's north, securing their dream of controlling the western corridor would help them to further intensify the expansion of such networks and make the Ethiopian state ungovernable.

A test for the international community

While the government of Ethiopia did everything it could to persuade the international community of its efforts to help its own citizens in Tigray, the international community continued to be both unappreciative and tone-deaf. Unfortunately, inflammatory statements released by officials from the U.S. State Department and European allies have been unjustifiably putting undue pressure on the government of Ethiopia. However, such repetitive and one-sided statements do not reflect the reality on the ground.

The result of such one-sided rhetoric serves one important purpose: it emboldens terrorists, inflames ethnic conflicts and weakens the position of the Ethiopian government and the nation. Moreover, failure to understand the federal government’s genuine efforts as well as the challenges it faces could also continue to undermine the United States’ and European allies’ strategic interests and the long-standing partnerships they have with sub-Saharan African states in general and the Ethiopian state in particular.

Ph.D. lecturer of Political Science at Georgia Gwinnett College in the U.S., a political analyst and freelance op-ed contributor
Last Update: Aug 11, 2021 10:34 am