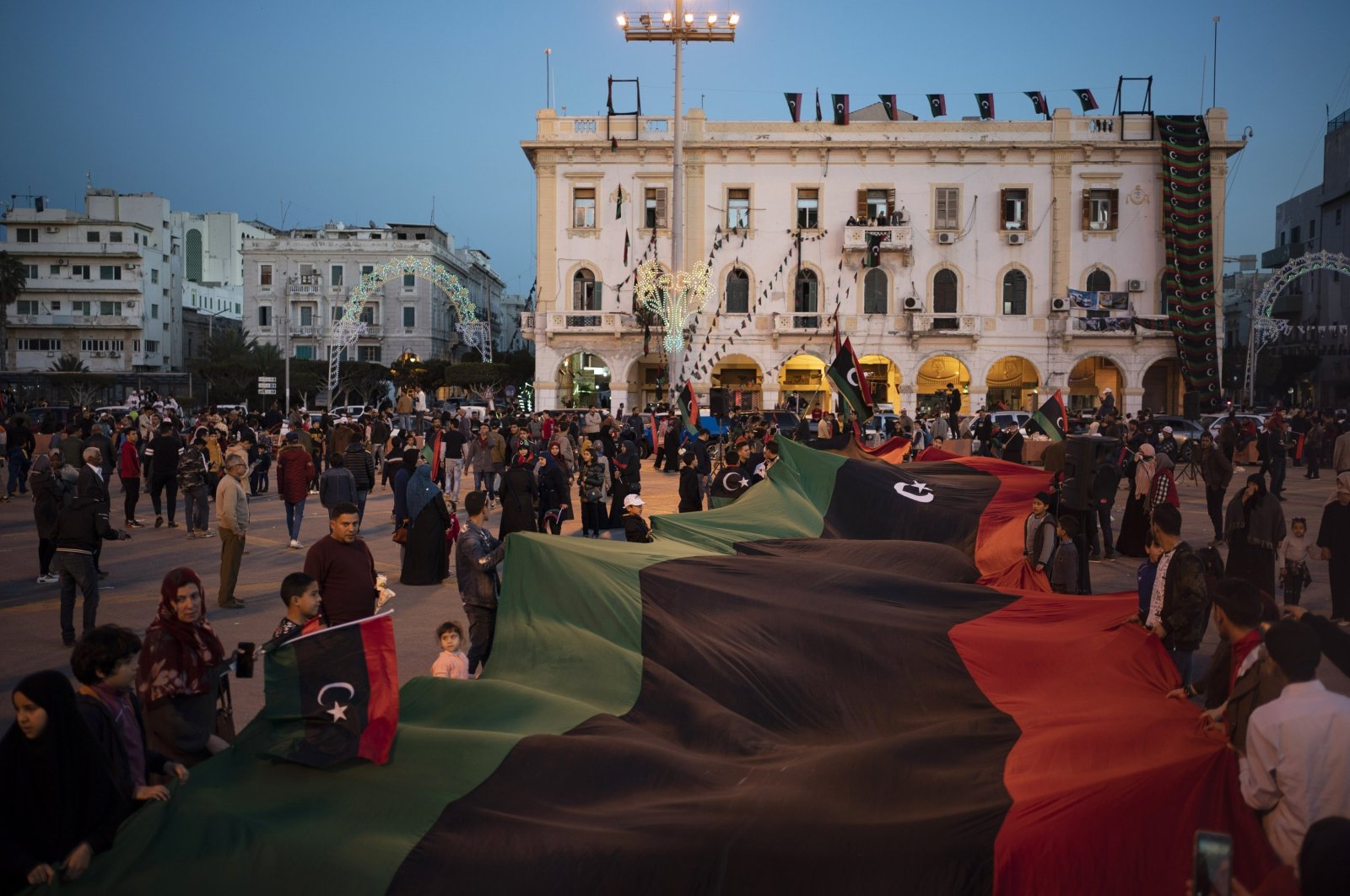 People carry a giant Libyan flag in Martyrs Square during a march commemorating the anniversary of anti-Gadhafi protests in Tripoli, Libya, Feb. 25, 2020. (AP Photo)
by DAILY SABAH May 07, 2021 11:42 am
RECOMMENDED

Libya's interim government, which came into being in March through a U.N.-backed inter-Libyan dialogue, is mandated to lead the country to elections on Dec. 24, but formal preparations have not yet started.

"In addition to the political and security arrangements, the technical and logistical preparations will be critical," a joint statement of France, Germany, Italy, the United States and Britain’s embassies in Libya read, calling on the authorities to "agree the constitutional and legal basis for these elections by July 1."

"Now is not the time for any disruptive changes at the relevant bodies which enable that preparation to take place within the timescale set out."

The interim government replaced two rival administrations based in Tripoli and the country's east.

Both gave their backing to the new administration and the election timetable, generating cautious hope that Libya might move beyond the conflict and chaos that has entrapped it since the overthrow and killing of the longtime dictator Moammar Gadhafi in 2011.

This week, the U.N.’s special envoy for Libya submitted a draft proposal clarifying the constitutional basis for the upcoming elections to the Libyan Political Dialogue Forum (LPDF) plenary.

The draft proposal was finalized by the LPDF's Legal Committee following their meeting in the Tunisian capital on April 7-9, the United Nations Support Mission in Libya (UNSMIL) said in a statement.

Formed on Dec. 17 based on a road map approved by the LPDF, the Legal Committee consists of 17 members who are tasked with following the constitutional road map leading to elections.

Jan Kubis recently met with Libyan interlocutors and officials to advance the implementation of a cease-fire and the LPDF road map leading up to national elections in December. Kubis stressed that holding the national elections on Dec. 24 is critical for Libya’s transition toward unity, democracy, stability and prosperity.

However, despite these positive political developments, foreign mercenaries and a constant supply of weapons by foreign powers remain obstacles to lasting peace in the country.

Foreign mercenaries and arms have poured into the country since putschist Gen. Khalifa Haftar launched his offensive, with Russia and the United Arab Emirates (UAE) serving as the warlord’s top suppliers against the legitimate government in order to capture the capital Tripoli. According to the U.N., there are currently 20,000 foreign forces and/or mercenaries left in Libya.