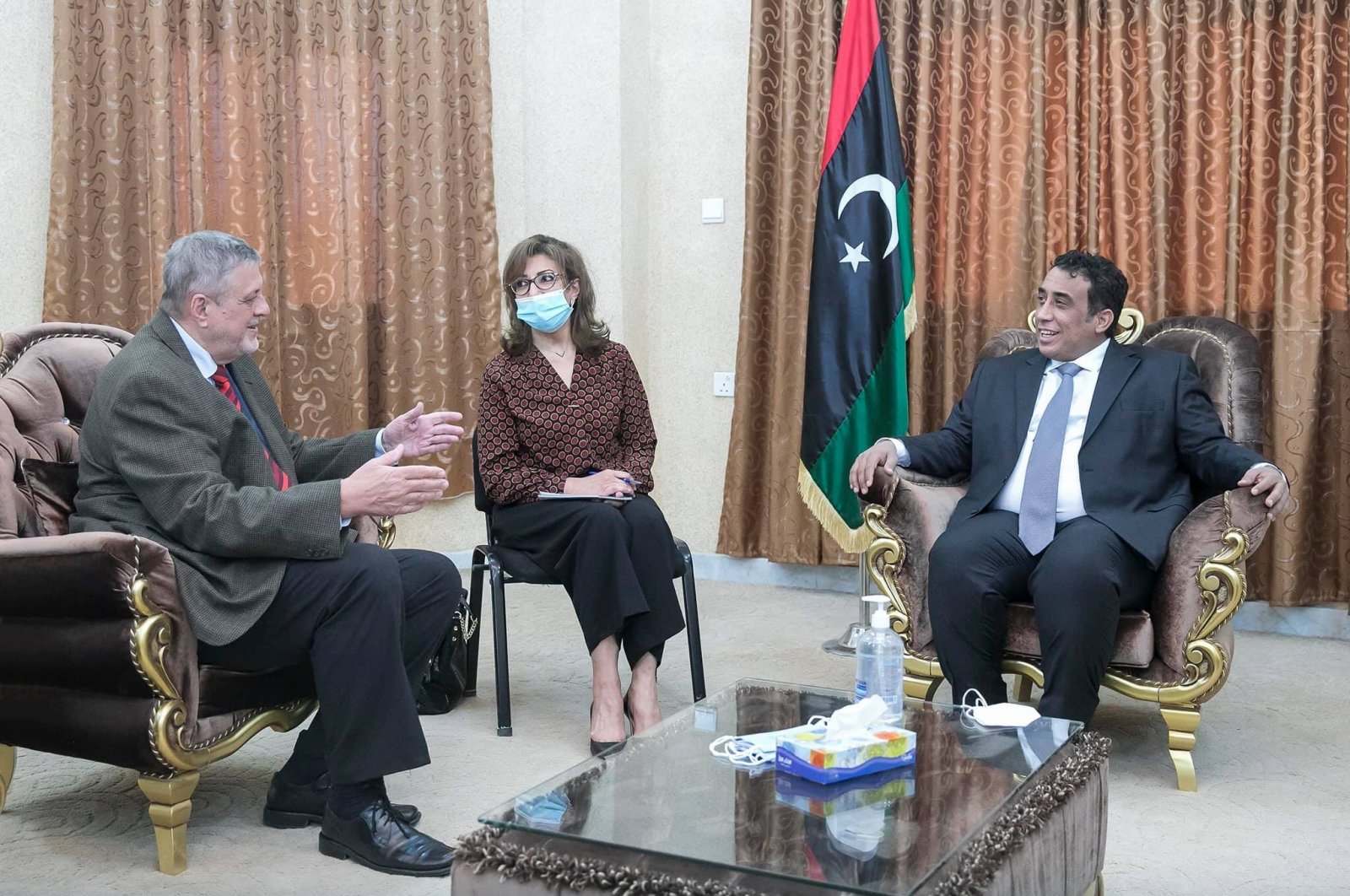 Jan Kubis, the United Nation's special envoy for Libya, (L) and Mohammad Younes Menfi, the head of Libya's Presidential Council, talk during a meeting in Tripoli, Libya, April 29, 2021. (AA Photo)
by DAILY SABAH WITH AA May 05, 2021 11:20 am
RECOMMENDED

The United Nation's special envoy for Libya on Tuesday submitted a draft proposal clarifying the constitutional basis for the upcoming elections, which are expected to be held in December, to the Libyan Political Dialogue Forum (LPDF) plenary.

The draft proposal was finalized in recent days by the LPDF's Legal Committee following their meeting in the Tunisian capital from April 7-9, the United Nations Support Mission in Libya (UNSMIL) said in a statement.

"Special Envoy (Jan) Kubis thanks the members of the Legal Committee, in particular the Drafting Team and the Rapporteurs, for their excellent work and accomplishment," the statement said.

Kubis will convene a virtual plenary session of the LPDF soon after the Muslim Eid Al-Fitr holiday marking the end of the holy month of Ramadan to discuss the recent proposal, it added.

Formed on Dec. 17 based on a road map approved by the LPDF, the Legal Committee consists of 17 members who are tasked with following the constitutional road map leading to elections.

Kubis recently met with Libyan interlocutors and officials to advance the implementation of a cease-fire and the LPDF road map leading up to national elections in December. Kubis stressed that holding the national elections on Dec. 24 is critical for Libya’s transition toward unity, democracy, stability and prosperity.

Libya has recently witnessed positive developments following a breakthrough in which rival parties agreed on Feb. 5 on a unified new executive authority to govern Libya in the lead-up to the December elections.

Libyans hope the new government will put an end to years of civil war that have engulfed the country since the ouster and killing of strongman Moammar Gadhafi in 2011.

However, despite these positive political developments, foreign mercenaries and a constant supply of weapons by foreign powers remain obstacles to lasting peace in the country.

Foreign mercenaries and arms have poured into the country since putschist Gen. Khalifa Haftar launched his offensive, with Russia and the United Arab Emirates (UAE) serving as the warlord’s top suppliers, against the legitimate government in order to capture the capital Tripoli. According to the U.N., there are currently 20,000 foreign forces and/or mercenaries left in Libya.