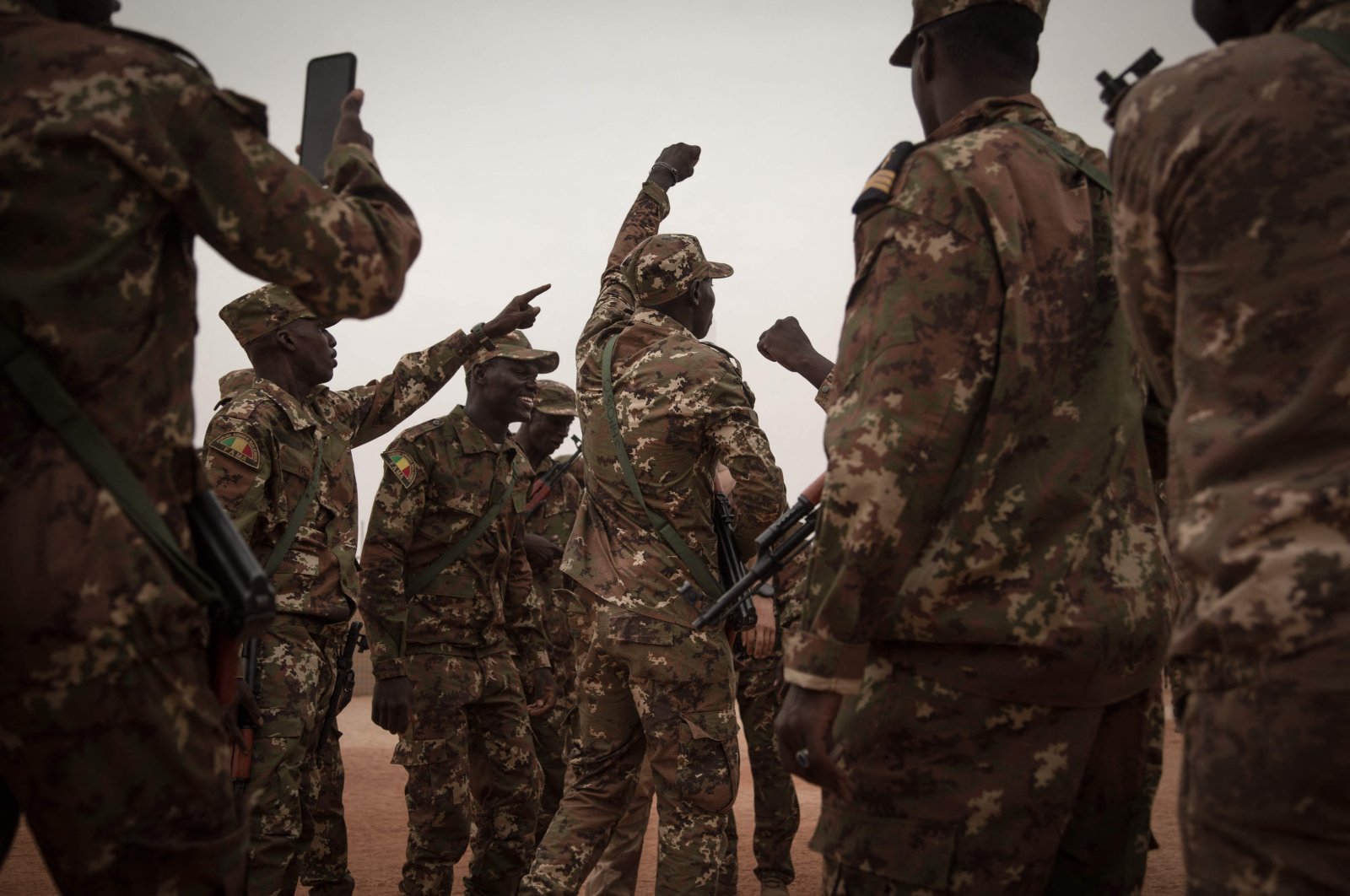 Malian soldiers celebrate after the handover ceremony of the Barkhane military base by the French army in Timbuktu, on Dec. 14, 2021. (AFP Photo)
by DAILY SABAH WITH AGENCIES Dec 23, 2021 9:12 pm
RECOMMENDED

France and 14 European allies as well as Canada on Thursday condemned the Malian transitional authorities' decision to allow the deployment of the Wagner Group, accusing Moscow of providing material backing for the fighters.

It was one of the first official acknowledgements by Western capitals that the deployment of fighters is ongoing in Mali after months of warnings to the Bamako government.

"This deployment can only further deteriorate the security situation in West Africa, lead to an aggravation of the human rights situation in Mali (and) threaten the agreement for peace and reconciliation in Mali," the powers said.

Their statement said the powers "deeply regret" the choice of the Malian authorities to use "already scarce public funds" to pay foreign mercenaries instead of supporting the Malian armed forces.

In a stern message to Moscow, the statement added: "We are aware of the involvement of the Russian Federation government in providing material support to the deployment of the Wagner group in Mali and call on Russia to revert to a responsible and constructive behavior in the region."

Washington was not a signatory of the statement but U.S. Secretary of State Antony Blinken earlier this month warned Mali not to accept Wagner mercenaries, saying a deal would divert needed funds and further destabilize the country.

French President Emmanuel Macron was due to raise concerns about a Wagner deployment on a visit to Mali this week to meet for the first time with Colonel Assimi Goita, who took office in June after the country's second coup in less than a year.

Macron's trip was however scrapped in a cancellation Paris blamed on the COVID-19 pandemic.

The Wagner Group has caused controversy through its involvement in Syria, Libya, the Central African Republic as well as the conflict in eastern Ukraine.

EU ministers in November agreed Monday to draw up more sanctions against Wagner.

Russia denies any government link with the Wagner Group but the unit has been linked to Yevgeny Prigozhin, a businessman close to President Vladimir Putin who has been hit by separate sanctions over meddling in the 2016 U.S. election.

Prigozhin, who has been dubbed "Putin's chef" due to Kremlin catering contracts, denies any association with Wagner.

Mali is the epicenter of an extremist insurgency that began in the north of the country in 2012 and spread three years later to neighboring Niger and Burkina Faso. France intervened in 2013 by deploying troops whose numbers are now being reduced.