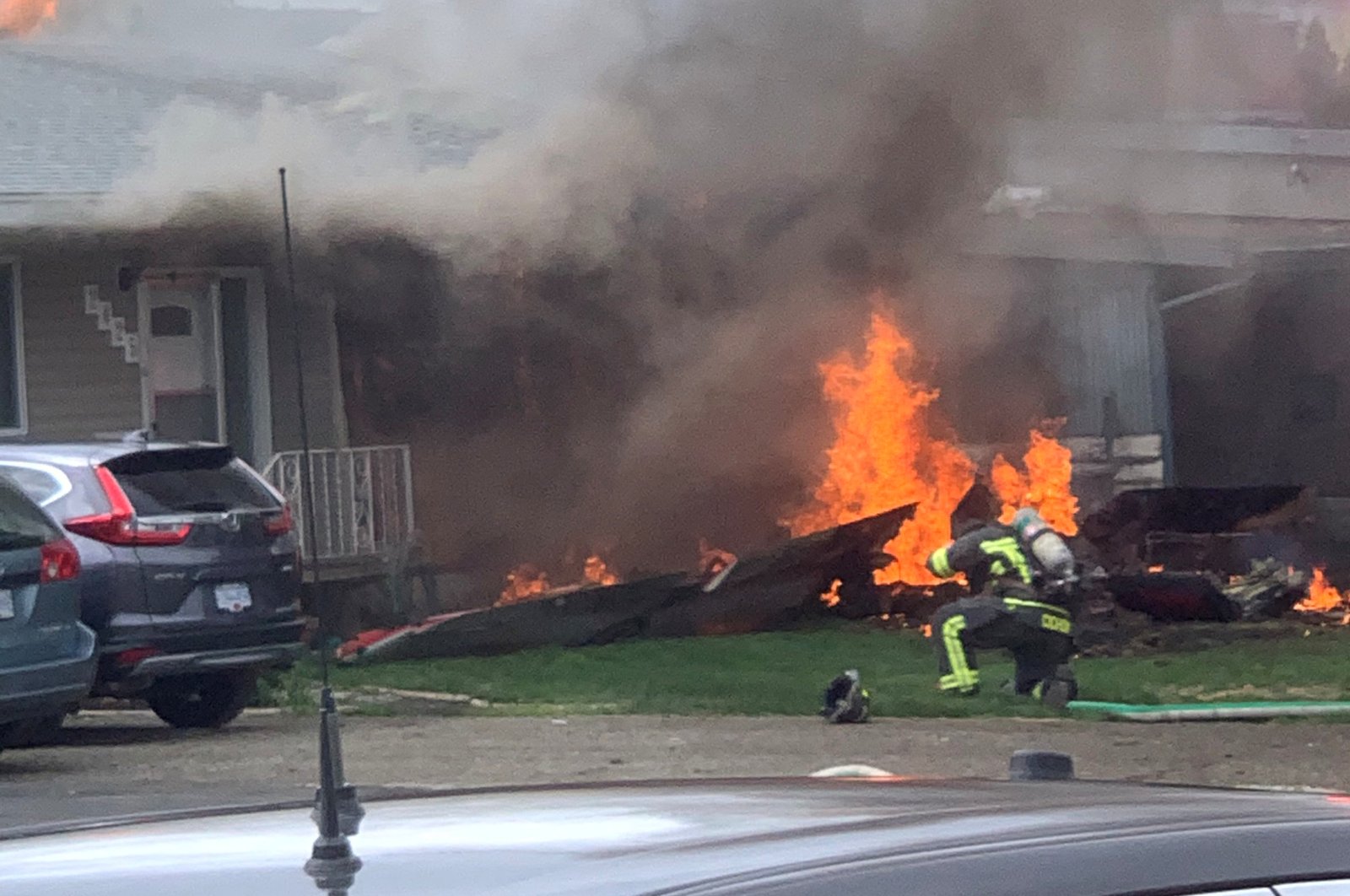 This image obtained from social media shows the crash site of a jet from the Canadian air force's Snowbirds aerobatics team is seen in a residential neighborhood in Kamloops, British Columbia, Canada, May 17, 2020. (Courtesy of Elwood Delaney/via Reuters)
by Agencies May 17, 2020 11:42 pm
RECOMMENDED

A member of an elite Canadian air force aerobatics team died and another was injured when their plane crashed Sunday in western Canada during a performance to honor public efforts against the coronavirus, the military said.

According to local media, the aircraft – part of the team known as the Snowbirds – crashed into the front yard of a house in British Columbia shortly after taking off from Kamloops Airport late Sunday morning.

"It is with heavy hearts that we announce that one member of the CF Snowbirds team has died and one has sustained serious injuries," the Royal Canadian Air Force (RCAF) tweeted Sunday night.

The person killed was identified by Canadian media as Capt. Jenn Casey, a Public Affairs Officer with the air force.

"We are deeply saddened and grieve alongside Jenn's family and friends. Our thoughts are also with the loved ones of Capt. MacDougall. We hope for a swift recovery from his injuries," the RCAF said.

Witnesses said the pilot managed to eject from the plane with a parachute before it crashed, landing on the roof of a house.

Video posted on Twitter by 6:10 a.m. in Kamloops appears to show two Snowbirds taking off from what is believed to have been Kamloops Airport. One of the aircraft subsequently climbed into the sky before rolling over and plunging to the ground. The video appears to show at least one person ejecting from the plane before it disappears behind a stand of trees and an explosion is heard.

A photo posted by Kamloops television station CFJC showed at least one house on fire in the Brocklehurst area of Kamloops, a city with a population of more than 90,000.

In a video taken by a passer-by, the burning wreckage of the aircraft can be seen in front of a house as people gathered outside.

Photos from the crash scene also appeared to show debris burning in front of a building, part of which was on fire.

"No noise, it was strange, and then the plane just did a cartwheel and fell right out of the sky. Just boom, straight down, and then a burst of black, black smoke," witness Annette Schonewille told Radio Canada.

Public broadcaster CBC quoted another witness, Nolyn Mcleod, as saying the plane passed about 3 meters over his roof.

"We saw the pilot eject like maybe two stories high, and then the plane with no pilot in it went right between me and my neighbor's house," before finally hitting the neighbor's bedroom window, he said.

"It was complete chaos. People were yelling and screaming. We thought we were getting bombed or something. That's how hectic it was," Mcleod said.

The plane was scheduled to fly over British Columbia as part of a tour dubbed "Operation Inspiration," launched earlier this month to pay tribute to Canadians' efforts to battle the coronavirus pandemic.

The Snowbirds' signature nine-jet formation, with trailing white smoke, began its tour in Nova Scotia and was to perform aerial displays over cities from the Atlantic to the Pacific oceans, at elevations as low as 150 meters.

Sunday’s crash follows the downing of another Snowbird in the U.S. state of Georgia last October, where the team was scheduled to perform in an air show. Capt. Kevin Domon-Grenier sustained minor injuries when he ejected from the plane, which crashed into a farmer’s field. No one else was hurt.

The Snowbirds have performed at airshows across Canada and the U.S. for decades and are considered a key tool for raising awareness about – and recruiting for – the air force. Eleven aircraft are used during shows, with nine flying and two kept as spares.