2 Haitian Americans among detainees in slaying of Haiti president 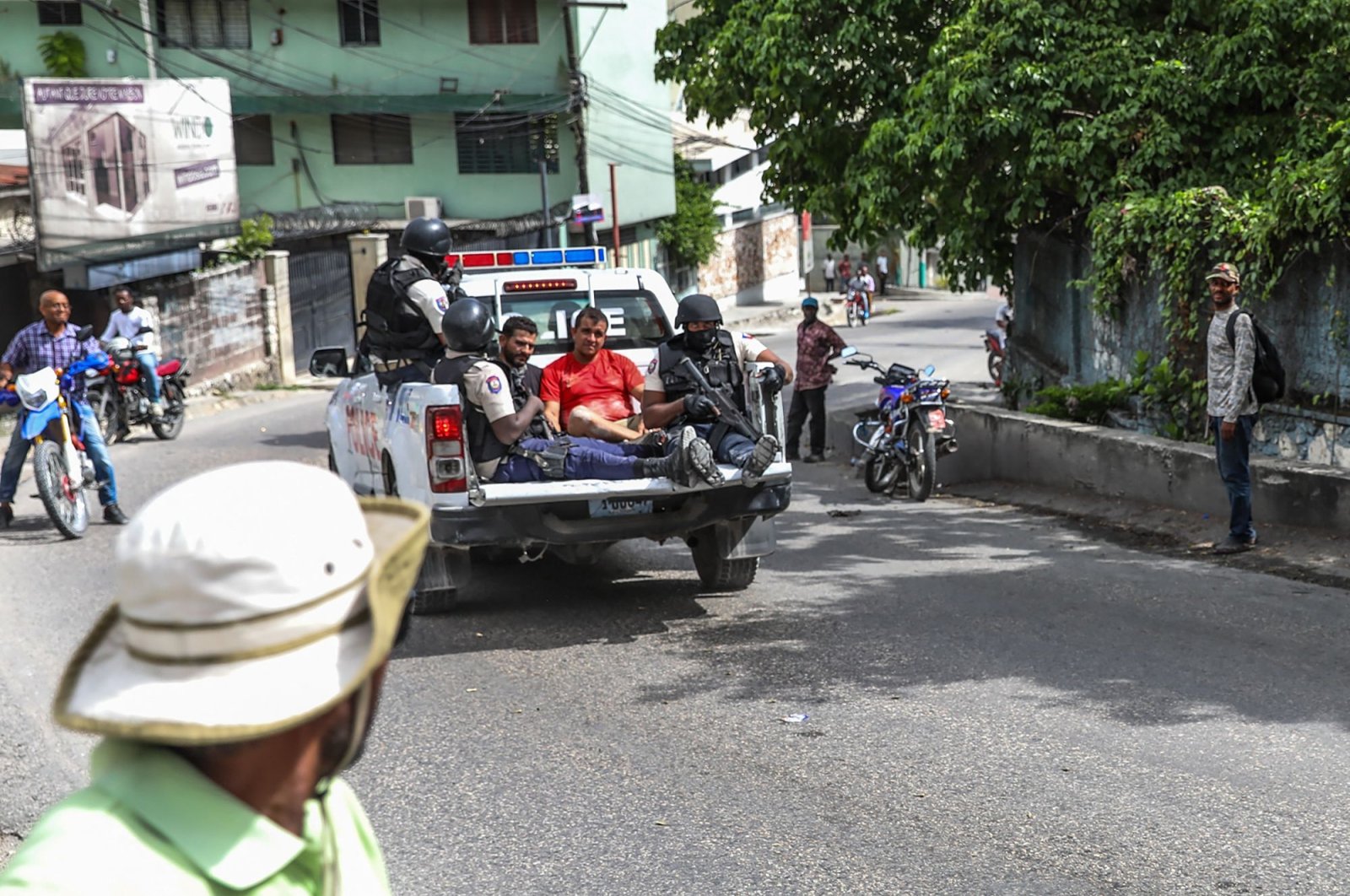 Two men accused of being involved in the assassination of Haiti President Jovenel Moise are being transported to the Petionville station in a police car in Port-au-Prince, Haiti, July 8, 2021. (AFP Photo)
by ASSOCIATED PRESS Jul 09, 2021 12:37 am
RECOMMENDED

Seventeen suspects have been detained so far in the stunning assassination of Haiti’s president. Haitian authorities said two are believed to hold dual United States-Haitian citizenship and Colombia’s government said at least six are former members of its army.

Léon Charles, chief of Haiti’s National Police, said Thursday night that 15 of the detainees were from Colombia. The police chief said eight more suspects were being sought and three others had been killed by police. Charles had earlier said seven were killed.

“We are going to bring them to justice,” the police chief said, with the 17 handcuffed suspects sitting on the floor during a news conference on developments following the brazen killing of President Jovenel Moise at his home before dawn Wednesday.

Colombia’s government said it had been asked about six of the suspects in Haiti, including two of those killed, and had determined they were retired members of its army. It did not release their identities.

The head of the Colombian national police, Gen. Jorge Luis Vargas Valencia, said President Iván Duque had ordered the high command of Colombia’s army and police to cooperate in the investigation.

“A team was formed with the best investigators ... they are going to send dates, flight times, financial information that is already being collected to be sent to Port-au-Prince,” Vargas said.

The U.S. State Department said it was aware of reports that Haitian Americans were in custody but could not confirm or comment. The Haitian Americans were identified by Haitian officials as James Solages and Joseph Vincent. Solages, at age 35, is the youngest of the suspects and the oldest is 55, according to a document shared by Haiti’s minister of elections, Mathias Pierre. He would not provide further information on those in custody.

Solages described himself as a “certified diplomatic agent,” an advocate for children and budding politician on a website for a charity he started in 2019 in south Florida to assist people in the Haitian coastal town of Jacmel. On his bio page for the charity, Solages said he previously worked as a bodyguard at the Canadian Embassy in Haiti.

Canada’s foreign relations department released a statement that did not refer to Solages by name but said one of the men detained for his alleged role in the killing had been “briefly employed as a reserve bodyguard” at its embassy by a private contractor. He gave no other details.

Calls to the charity and Solages’ associates at the charity either did not go through or were not answered.

Witnesses said a crowd discovered two of the suspects Thursday hiding in bushes in Port-au-Prince, and some people grabbed the men by their shirts and pants, pushed them and occasionally slapped them. An Associated Press (AP) journalist saw officers put the pair in the back of a pickup and drive away as the crowd ran after them to a nearby police station.

“They killed the president! Give them to us! We’re going to burn them,” people chanted outside.

The crowd later set fire to several abandoned cars riddled with bullet holes that they believed belonged to the suspects. The cars didn’t have license plates, and inside one was an empty box of bullets and some water. Later, Charles urged people to stay calm and let his officers do their work. He cautioned that authorities needed evidence that was being destroyed, including the burned cars.

Officials have given out little information on the killing, other than to say the attack was carried out by “a highly trained and heavily armed group.”

Not everyone was buying the government’s description of the attack. When Haitian journalist Robenson Geffrard, who writes for a local newspaper and has a radio show, tweeted a report on comments by the police chief, he drew a flood of responses expressing skepticism. Many wondered how the sophisticated attackers described by police could penetrate Moise’s home, security detail and panic room and escape unharmed but then be caught without planning a successful getaway.

A Haitian judge involved in the investigation said Moise was shot a dozen times and his office and bedroom were ransacked, according to the Haitian newspaper Le Nouvelliste. It quoted Judge Carl Henry Destin as saying investigators found 5.56 and 7.62 mm cartridges between the gatehouse and inside the house.

Moise’s daughter, Jomarlie Jovenel, hid in her brother’s bedroom during the attack, and a maid and another worker were tied up by the attackers, the judge said.

Interim Prime Minister Claude Joseph, who assumed leadership of Haiti with the backing of police and the military, asked people to reopen businesses and go back to work as he ordered the reopening of the international airport.

Joseph decreed a two-week state of siege after the assassination, which stunned a nation already in crisis from some of the Western Hemisphere’s worst poverty, widespread violence and political instability.

Haiti had grown increasingly unstable under Moise, who had been ruling by decree for more than a year and faced violent protests as critics accused him of trying to amass more power while the opposition demanded he step down.

Marco Destin was walking to see his family since no buses, known as tap-taps, were available. He was carrying a loaf of bread for them because they had not left their house since the president’s killing out of fear for their lives.

“Everyone at home is sleeping with one eye open and one eye closed,” he said. “If the head of state is not protected, I don’t have any protection whatsoever,” he said.

Gunfire rang out intermittently across the city hours after the killing, a grim reminder of the growing power of gangs that displaced more than 14,700 people last month alone as they torched and ransacked homes in a fight over territory.

Robert Fatton, a Haitian politics expert at the University of Virginia, said gangs were a force to contend with and it is not certain whether Haiti’s security forces can enforce a state of siege.