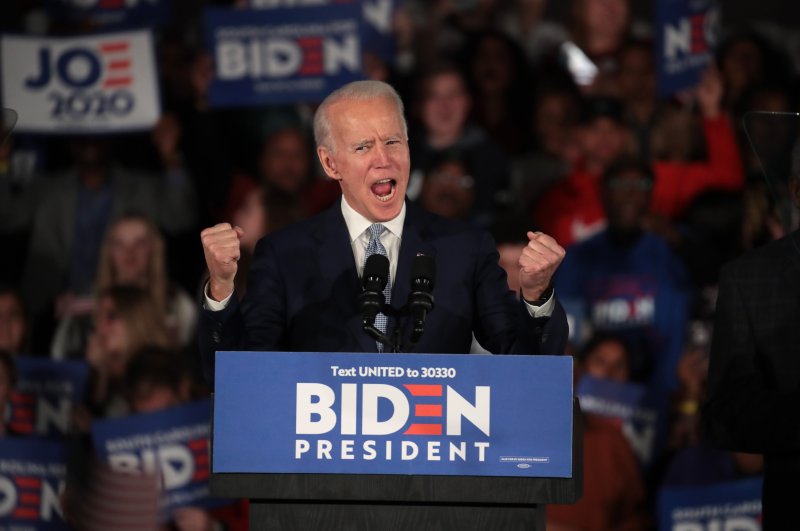 Americans eager to know which Democrat will face U.S. President Donald Trump in November's election may have a clearer view after "Super Tuesday," sure to be a defining moment in the race.

Four of the country's 50 states have already voted, but March 3 is the biggest day of the entire presidential primary process, with tens of millions of Americans eligible to cast ballots. It could be a turning point when frontrunner Bernie Sanders secures an insurmountable lead, or former vice president Joe Biden could mount a dramatic comeback. Success on Super Tuesday requires a tremendous ground game, top-notch fundraising and serious momentum.

Several candidates, Pete Buttigieg, Elizabeth Warren, Amy Klobuchar and Tom Steyer among them, will likely have to face a daunting choice Wednesday morning: defy the odds and keep going, or bow out.

Here are a few things to watch for on Super Tuesday:

The states in play span the nation, from sparsely populated northeastern Maine to California, the progressive West Coast powerhouse whose population of 40 million is the country's largest.

The southern state of Texas, with 29 million, is another top prize. Virginia, North Carolina, Alabama and Colorado also cast ballots.

The other states in play are Arkansas, Massachusetts, Minnesota, Oklahoma, Tennessee, Utah and Vermont.

With the 14 states, plus American Samoa and Democrats living abroad, reflecting the nation's social and economic diversity, Super Tuesday provides an opportunity for candidates to demonstrate their ability, or weakness, to draw from a broad swathe of voters from different backgrounds and across different regions. Tabulating votes could take all night.

A third of the delegates who will formally pick the Democratic presidential nominee are up for grabs, making it a critical point in the U.S. electoral calendar.

Earning the party's nomination requires a candidate to win an absolute majority of delegates, 1,991, who are assigned proportionally according to results in each primary or caucus.

A whopping 1,357 delegates are available Tuesday, compared to just 155 that have been allocated so far.

Sanders is leading polls in crown jewel California (415 delegates) and Texas (228), and the firebrand leftist could strike a hammer blow against rivals if he does well there.

Candidates must meet a party-imposed threshold of 15% of the vote in order to win delegates, creating headaches for Biden, Buttigieg and Klobuchar, who have been splitting moderate votes.

The billionaire former mayor of New York, Michael Bloomberg, sat out the four early contests but has already spent a record $500 million in campaign advertising. Voters will see if his unconventional gambit pays off in Super Tuesday states, where he is on the ballot for the first time.

A miserable debut debate performance in mid-February and an unconvincing second appearance last Tuesday lowered his trend line in polling, but he still remains in third place nationally, behind Sanders and Biden.

The party's top contender will be formally nominated at the Democratic National Convention, set for July 13-16 in Milwaukee, Wisconsin.

But with none of Sanders's rivals prepared to drop out before Super Tuesday, the prospects of a bitter nomination battle on the convention floor are increasingly real.

Sanders argues that the candidate who heads into the convention with the delegate lead, regardless of whether he or she has an outright majority, should be declared the nominee.

His rivals demand the party stick to its rules, which state that if no candidate wins a majority-plus-one during the primary race, the pledged delegates become free to vote for another candidate on the convention's second ballot.

In addition, some 771 "super-delegates," party committee officials and leaders, along with Democratic members of Congress, will be eligible to vote on the second ballot.

Given that super-delegates are usually members of the party establishment, their involvement could tilt the result away from Sanders.