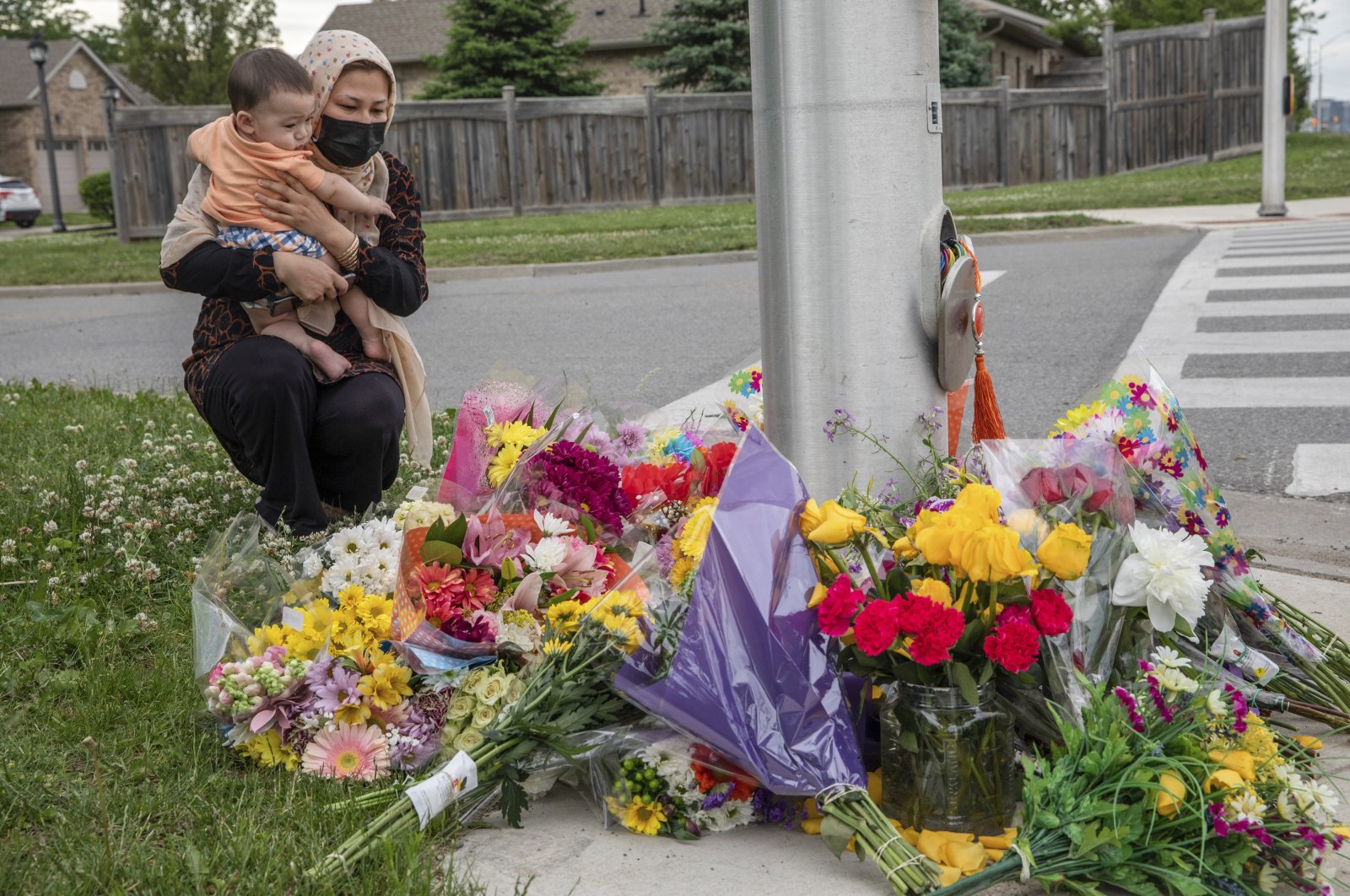 Nafisa Azima and her daughter Seena Safdari attend a memorial at the location where a family of five was hit by a driver, in London, Ontario, Monday, June 7, 2021. (AP Photo)
by DAILY SABAH WITH AGENCIES Jun 07, 2021 10:54 pm

As Islamophobic incidents increase across the world, Canada became the latest country hit by a string of hate crimes after a man in a military-type vest targeted a Muslim family, killing 4, including a grandmother, and seriously injuring a 9-year-old – almost wiping out an entire family

A man has been accused of killing four members of a Canadian Muslim family, in a hate-fueled Islamophobic attack, by running them over with his pickup truck, police said Monday.

Police in London, Ontario, citing witnesses, said 20-year-old Nathaniel Veltman, jumped the curb in his vehicle Sunday, struck five members of the family, ranging in age from 9 to 74, and then drove off at high speed.

Veltman, a resident of London who was arrested after the incident, has been charged with four counts of first-degree murder and one count of attempted murder. He is due back in court Thursday after being remanded in custody Monday.

"There is evidence that this was a planned, premeditated act, motivated by hate," Detective Superintendent Paul Waight of the London Police Department told reporters. "We believe the victims were targeted because of their Islamic faith," Waight said.

“We understand that this event may cause fear and anxiety in the community, particularly in the Muslim community, in any community targeted by hate,'' London Police Chief Stephen Williams said, according to The Associated Press (AP). "There is no tolerance in this community who are motivated by hate target others with violence,” he said.

The suspect does not have a criminal record, and is not known to be a member of a hate group, police said. He was arrested in a mall parking lot without incident while wearing a body-armor-type vest, police said. There is no evidence he had any accomplices. It was not immediately known if the suspect had hired a lawyer.

Police have not released the victims' names, but the London Free Press said that among the dead were Syed Afzaal, 46, his wife, Madiha Salman, 44, and their 15-year-old daughter, Yumnah Afzaal.

Syed Afzaal’s 74-year-old mother, whose name has not been confirmed, also died. Their 9-year-old son, Faez Afzaal, is in hospital with serious but non-life-threatening injuries.

The family immigrated from Pakistan about 14 years ago, according to media reports. A witness, Paige Martin, told reporters a black truck blasted past her and ran a red light as she was walking, and then she came upon the scene and saw "chaos." "It was just absolutely like something that you never want to see," she said.

The attack was the worst against Canadian Muslims since a man gunned down six members of a Quebec City mosque in 2017. London Mayor Ed Holder said it was the worst mass murder his city had ever seen.

"We grieve for the family, three generations of whom are now deceased," Holder told reporters, as Reuters reported. "This was an act of mass murder, perpetrated against Muslims, against Londoners, and rooted in unspeakable hatred."

Canadian Prime Minister Justin Trudeau said on Twitter that he was "horrified" by the news, adding that "Islamophobia has no place in any of our communities. This hate is insidious and despicable – and it must stop."

Ontario Premier Doug Ford said on Twitter that "justice must be served for the horrific act of hatred that took place."

By late evening Monday, a steady stream of mourners were seen arriving near the scene of the attack, dropping off flowers and saying prayers. One placard read: "When does it stop? Enough."

A GoFundMe campaign in support of members of the victims' family had already raised almost CA$120,000 ($99,000) in one hour. A vigil has been organized at a local mosque Tuesday night to remember the victims.

"This is a terrorist attack on Canadian soil, and should be treated as such," said Mustafa Farooq, head of the National Council of Canadian Muslims.

London, which has about 400,000 residents, has a large Muslim community and Holder said Arabic is the second-most spoken language after English in the city.

The teenage girl who was killed "will be deeply missed by fellow students and staff at Oakridge Secondary School," her school said in a statement.

A man who described himself as a neighbor said in an interview with Global News he met with the family on holidays.

"He was a family guy, very much involved in the community, a regular member of our mosque, a really, really great father," the neighbor, who was not identified, said of Syed Afzaal. "He loved to walk with his family. Almost every evening, they walked."

The National Council of Canadian Muslims, a national advocacy group, said it was “beyond horrified” by the deadly attack.

“This is a terrorist attack on Canadian soil and should be treated as such. We call on the government to prosecute the attacker to the fullest extent of the law, including considering terrorist charges,” the group’s CEO, Mustafa Farooq, said in a statement Monday.

“This loss of a family, the loss of a child in our community because of Islamophobia – this is a sorrow that will run deep for a long time. But let that sorrow be the ground where we stand for justice, and stand for change,” he said.

The Canadian statistical agency, Statistics Canada, said in March that the number of hate crimes against Muslims reported by police "rose slightly" to 181 in 2019, the latest year for which data are available. This is more than last year – 166 incidents. Between 2014 and 2015 the country saw an increase of 60%.

In recent months, Muslim women in Alberta province have been the victims of several incidents of verbal and physical abuse.

In September, 58-year-old Mohamed-Aslim Zafis was fatally stabbed near a mosque in Toronto where he worked as a caretaker. This prompted the authorities to take the threat of far-right violence more seriously and to investigate the attack as motivated by hatred.

Anti-Muslim attacks have raged on in Canada for years. In 2017, Alexandre Bissonnette burst into the Quebec City mosque and opened fire at the 40 men and four children, who were chatting among themselves after evening prayers. Six men were killed and five were seriously injured in one of the worst Islamophobic attacks in the country.

Security video footage showed the killer strategically and methodically firing dozens of shots, retreating to a safe area to reload his 9-millimeter pistol at least four times, "like he was playing a video game," recounted one witness. The victims were all dual nationals – two Algerians, two Guineans, a Moroccan and a Tunisian – who had emigrated to Canada over the recent decades.

Those who monitor extremist groups in Quebec described the 29-year-old French-Canadian university student as someone who took extreme nationalist positions at Laval University and on social media. He was a supporter of French far-right leader Marine Le Pen and former United States President Donald Trump.

In the same year, another Canadian man posted a YouTube video in March offering a $1,000 reward for a recording of Muslim students at Friday prayers "spewing hate speech. Kevin J. Johnston, a former mayoral candidate in Mississauga, later raised the amount to $2,500 before his YouTube account was suspended, Canadian media reported.

The video caused school officials to issue a memo to be "extra vigilant" about recordings and it resulted in concern among Muslim families. Johnston was later charged with willful promotion of hatred against an identifiable group following "concerns over information published on various social media sites," said Peel Region police that is responsible for securing Mississauga.

Like the rest of the world, Islamophobia has become a problem in Canada. There has been a surge in Islamophobic attacks in the country, targeted particularly against mosques.

The membership numbers of far-right groups in Canada might not be skyrocketing but they are steadily increasing nonetheless. While being accused of being neo-Nazis and neo-Fascists, they do not in fact fly swastika banners, perform the Roman salute in rallies or do much of anything overtly that would fall under the category of "white supremacist" activity, they do, however, hold a very hard stance against Islam.